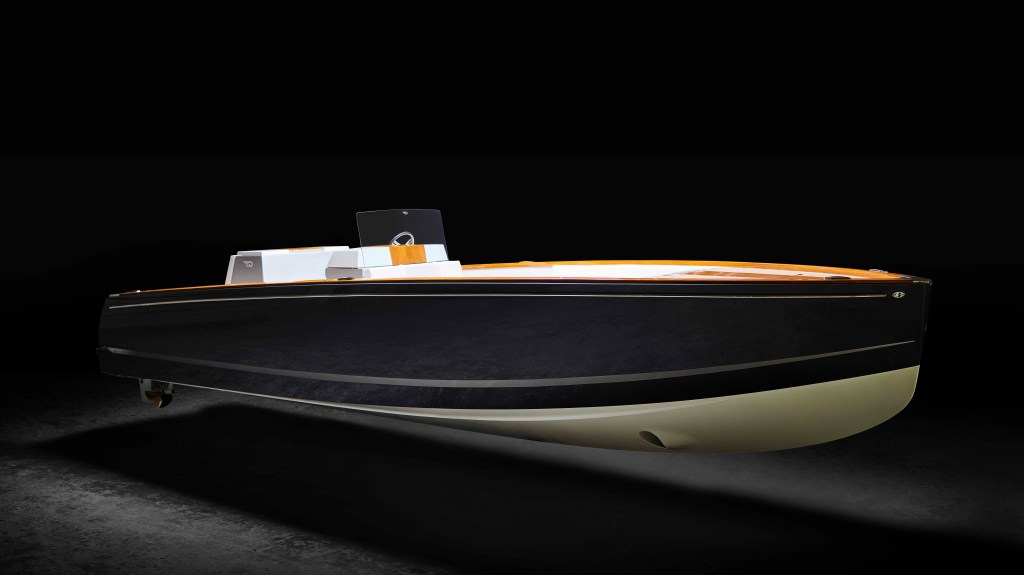 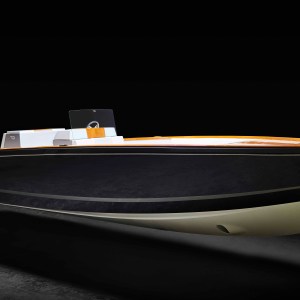 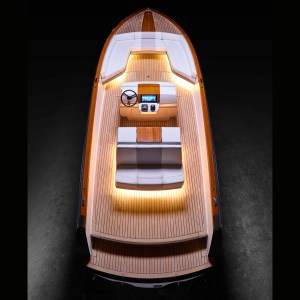 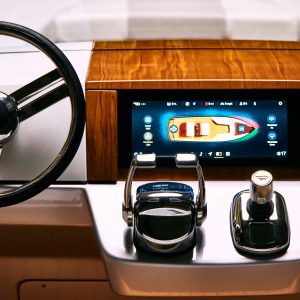 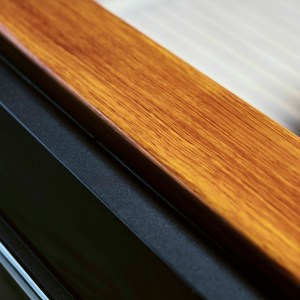 Hinckley Yachts broke design boundaries back in the early ’90s when it launched its first Picnic Boat, called Dasher. The handsome profile, large cockpit, and jet-drive power immediately attracted yachties looking for a more elegant and high-tech way to go day boating. Hinckley’s Picnic Boat became so popular that it soon had competitors in the U.S., Europe, and even Australia, who launched their own versions. “Picnic boat” became the generic term for the design.

The Maine builder is making yachting history again with another Dasher, this time the world’s first fully electric luxury day boat. Premiering today at the Newport boat show, the new 29-foot Dasher boasts multiple breakthroughs, including twin 80 hp electric inboard motors, BMW lithium batteries with enough juice to give Dasher a 40-mile range, and one of the coolest touchscreen consoles on any boat.

“Two years ago, we invited a bunch of engineers and designers, including America’s Cup gurus, software pros, and yacht designers, to discuss the future of yachting,” Scott Bryant, Hinckley’s head of product development, told RobbReport.com. “We came to the conclusion that the boat of the future needs to support the yachting experience of being with family and friends. That meant creating a boat that is quiet, simple, and has helm seat in the center so the captain can be part of the group.”

Hinckley partnered with Torqeedo, the leader in electric marine propulsion, for the engines. A year before, the German engine manufacturer had signed a deal with BMW for its proprietary i3 lithium ion batteries. These batteries turned out to be a game-changer in terms of extending charge times and therefore letting the Torqeedos run much longer. At 10 mph, Dasher has a range of 40 miles. Hinckley also wanted to make sure Dasher was no slow boat to China: It can reach a top end of 28 mph.

Quiet propulsion, zero emissions and no time spent at the fuel docks will be game-changers for yachties who are looking for an all-electric boat with exceptional build quality. Dasher can be recharged at any dock with dual 50-amp charging cords in just under four hours, about the same time as the most popular plug-in electric cars.

Yacht designer Michael Peters and his team also engineered a custom, feather-light hull, comprised of a carbon-epoxy composite hull and carbon stringers, to work in tandem with the 80 hp engines. Hinckley also created “artisanal teak,” a hand-painted epoxy composite that retains Hinckley’s signature varnished teak look but dramatically reduces the boat’s weight (and natural-teak maintenance time). Up close, the faux teak is indistinguishable from teak planks, but the painting is just as beautiful. The Maine builder also used 3-D printing to manufacture the most complex parts of the helm console to reduce weight. “It’s the lightest Hinckley ever and purpose-built for this electric propulsion,” says Bryant. “It’s also the quietest Hinckley ever, and that is saying a lot, considering the quiet operation of our Picnic Boats and Talaria jet boats.”

The touchscreen console on the helm also has a few technical highlights, including a frameless windshield that raises and lowers as the captain needs it.

The screen also has a range circle that shows how far the boat can run at current speeds and battery levels. “That changes, of course, depending on the loads, but it lets the owner know that they’ll get safely back home,” says Bryant.

Since Dasher is hull number one, there will no doubt be more options and modifications, including perhaps a lightweight carbon-fiber hardtop and different seating arrangements. Bryant says that with continued breakthroughs in battery technology that Dasher could well be just the start of another trend in yachting. “There have been many ongoing developments in battery density and storage,” says Bryant. “It seems like every quarter we’re seeing new technologies that would increase the range and running times of an electric boat like Dasher.”

Dasher will also be at the Fort Lauderdale International Boat Show November 1 through 5.