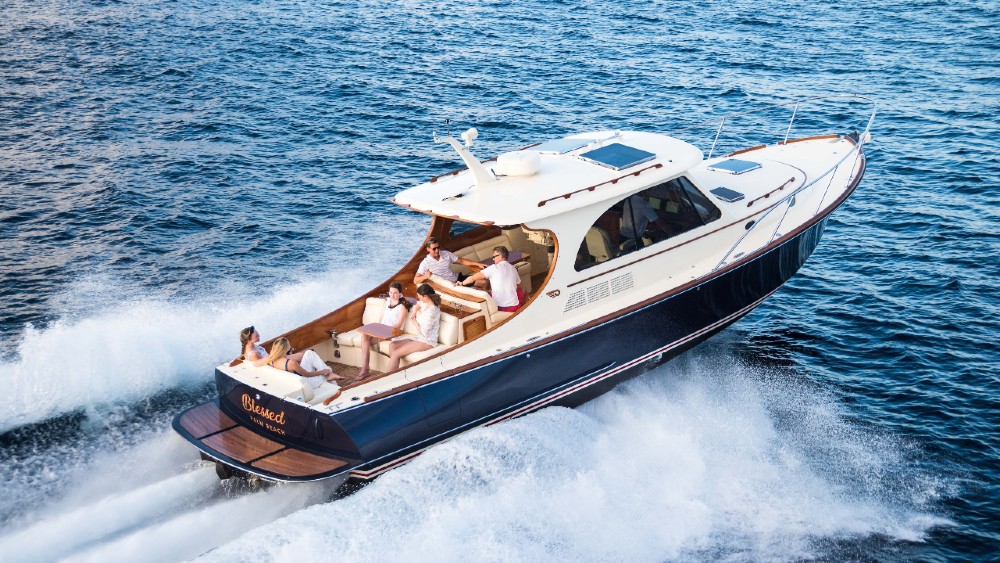 Electric boats are the perfect solution for zero-emission silent running, and doing away with wallet-depleting trips to the fuel dock. Less perfect is their generally short range, and the nerve-wracking range anxiety they can cause for owners.

That’s what Maine-based builder Hinckley Yachts found back in 2017 when they tested the waters with their all-electric 28-foot Dasher day boat concept. It was a noble experiment—and as it turned out five years ahead of its time—that flopped.

“Customers loved the thought of electric propulsion and whisper-quiet running. But they were less enthusiastic about a limited range,” Scott Bryant, Hinckley’s vice president of sales and marketing told Robb Report.

The hull shape of the Picnic Boat was designed for, well, picnics. The batteries will let owners do sunset cruises on electric power alone.  Courtesy Hinckley

Five years on, Hinckley reckons it has hit the right formula with its brand-new 40 S SilentJet, a hybrid version of its much-loved Picnic Boat. It combines electric power for hushed, low-speed cruising, with the 40mph performance of twin diesels.

It’s working on a strong heritage. The Picnic Boat has one of the most successful histories of any contemporary American boat. It launched in 1995 with a profile that was as Down East as any traditional Maine trawler, but with softer curves, lots of wood and much more elegance. What really set it apart was having the engines mated to jet drives that delivered strong maneuverability and quick acceleration. The hull’s shallow draft and propeller-less drive meant it could be maneuvered along Maine’s often-rocky coast without worrying about snapping a blade.

The design caught on with upper-crust boaters, especially former sailors, all over the country looking for a day boat with panache—forget the center console with outboards. Over the last two-and-a-half decades, as the Picnic Boat has gone through many iterations and upgrades, it’s still identified with Maine as much as LL Bean. The new SilentJet will have the same hull and topsides as Hinckley’s 40-footer, just with the lithium batteries.

The green battery packs forward are connected to electric motors behind the main diesels for electric-only mode.  Courtesy Hinckley

The hybrid system has been jointly developed over the past two years with Wisconsin-based propulsion specialists Twin Disc—one of their claims to fame was engineering the systems for the all-electric Maid of the Mist sightseeing boats plying the waters around Niagara Falls.

It uses a centrally mounted 80kWh lithium-ion battery pack to power twin 90kW electric motors mounted between the Hinckley’s twin Cummins diesels and the boat’s Hamilton jet drives. The tests show that under electric-only power, the SilentJet 40 will be able to cruise for at least an hour at 8 mph, and up to 90 minutes at 6.5 mph.

“You’ll be able to glide away from the dock and cruise around in total silence. Then you can drop the hook and run everything on battery power—air conditioning, an electric grill, all the systems—again in total silence, without the need for a noisy generator,” says Bryant.

The shape of the Picnic Boat has been a big hit for over 25 years.  Courtesy Hinckley

Have to get home in a hurry? Just push forward the throttles and the twin 550-horsepower Cummins QSB inline-six turbo diesels will fire up and push the boat to its 40mph top speed. At the same time the system’s electric motors will transform into high-output generators, re-charging the batteries in 30 to 45 minutes.

And this, according to Bryant, is all done without input from the owner. Hinckley and Twin Disc have jointly developed an advanced automatic switching system that seamlessly manages the diesel/electric operation.

The only drawback? Weight. All those batteries and twin electric motors will likely add between 1,600 and 1,800 pounds to the Picnic 40’s 25,000-pound displacement. The SilentJet will come standard with uprated Cummins diesels—550hp as opposed to standard 480hp versions—so performance under diesel power shouldn’t change.

The diesel power pushes the boat to a top end of 40mph.  Courtesy Hinckley Yachts

“There’s also no need for a diesel generator with the SilentJet, so there’s a weight savings there,” he adds.

Hinckley is currently testing out the system—and giving potential customers demo rides—in a modified, single-engine Picnic Boat 36. It made its surprise debut at the recent Hinckley owners’ rendezvous in Nantucket.

The plan is for the first SilentJet 40 to be delivered in the Spring of 2025. A full order book for the standard Picnic 40, and a reluctance for the company to risk compromising quality by increasing production, says Bryant, accounts for the long delay. As for pricing, he predicts somewhere in the region of a 20 per cent increase for the hybrid SilentJet over the standard $2.2 million-and-up boat. That puts it at around $2.64 million.