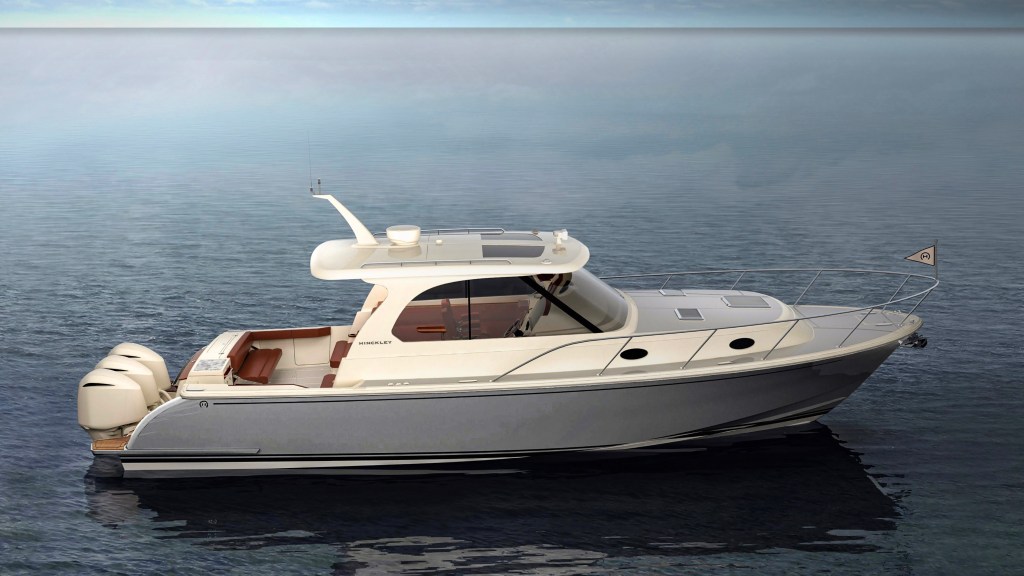 Until recently, the idea of hanging outboard engines off the transoms of Downeast-style yachts was downright sacrilegious. It just didn’t look right. The engines have always been inside these traditionally styled boats to create an elegant profile that is seamless from bow to stern. But that was then. The poster child of Downeast builders, Hinckley announced two new 42-foot outboard boats, the Sport Boat and Sport Boat with Center Cabin, that could change the game in that midrange category, much as the Maine builder did 25 years ago with the first Picnic Boat.

New England yards have been slower to adopt outboards than fish-boat builders that are clamoring for higher horsepower, as the market for ever-larger center-console boats continues to explode. Hinckley clearly understands the advantages of the outboard—faster, more fuel-efficient, and causing much less vibration than an inboard engine. “This boat will have a soft ride in big seas, with little to no bow rise when it comes on plane,” notes Scott Bryant, head of Hinckley product development. “Performance was a big part of the design, but seakeeping was just as important. We wanted to make sure the boat is fast, but also handles really well.”

Instead of just bolting outboards on back, Hinckley designed its Sport Boat models from the ground up, working with C. Raymond Hunt to create an offshore hull that is fast and elegant. The new yachts retain the classic Hinckley look, with the outboard engines integrated into the profile. The Sport Boats have a standard power package of twin 300 hp Mercury Verados or Yamaha four-stroke outboard engines, with the option of triple 375 hp Verados and twin 627 hp Seven Marine outboards. The standards deliver a top speed of 52 mph, while the optional engines push it to 63 mph, making these the fastest Hinckleys ever.

True to its standards, the build process is one of the most advanced in the industry. Hinckley recently switched to using an Epoxy resin with a carbon-fiber and Kevlar layup to make the boat stronger and lighter. Hinckley’s epoxy infusion is not only 40 percent stronger than most traditional layups, but the surface keeps its original luster (no cracks or crazing) much longer. It also made the boat virtually bulletproof on the ocean.

The Sport Boat with Center Cabin, to be launched in July, is Hinckley’s version of an upscale center-console boat, though with a much larger, more functional cabin. The features include a bathroom with shower, three-person settee that converts to a V-berth, galley, and even a cappuccino maker. That last item may well be the only semifrivolous feature on this well-designed yacht. “We have competitors whose boats go 80 mph and have 100 gee-whiz features that break in a year,” says Bryant. “We designed this boat with the right features for the boat, not just more stuff for the sake of it.” The standard features list is impressive: air conditioning, hull-side doors, refrigerator, power windows next to the helm, teak-and-holly flooring, and automatic shade for the stern. The options include, among others, a Seakeeper gyro to minimize roll and a fishing package if the owner wants to use the boat like a center console.

The second model has a more traditional Downeast hardtop enclosure, along with a larger cabin that extends up into the bow. The cabin has a V-berth forward and settee aft that makes up into a bed, along with the full galley and enclosed head. This model would make a great weekend cruiser.

Given the outboard mania in America’s boating circles and many traditional boaters’ love for Downeast styling, the Sport Boats should do well for Hinckley. “When the company started 90 years ago, it was often easier to travel by water than road,” says Bryant. “We see this boat offering that possibility again, with speeds that cut travel times sometimes in half. You can get from Greenwich to Manhattan in 35 minutes, and from Palm Beach to Old Bahama Bay in only an hour.” The Hinckley’s bluewater hull and comfortable ride could make commuter yachts a trend in the near future, rather than a thing of the past.