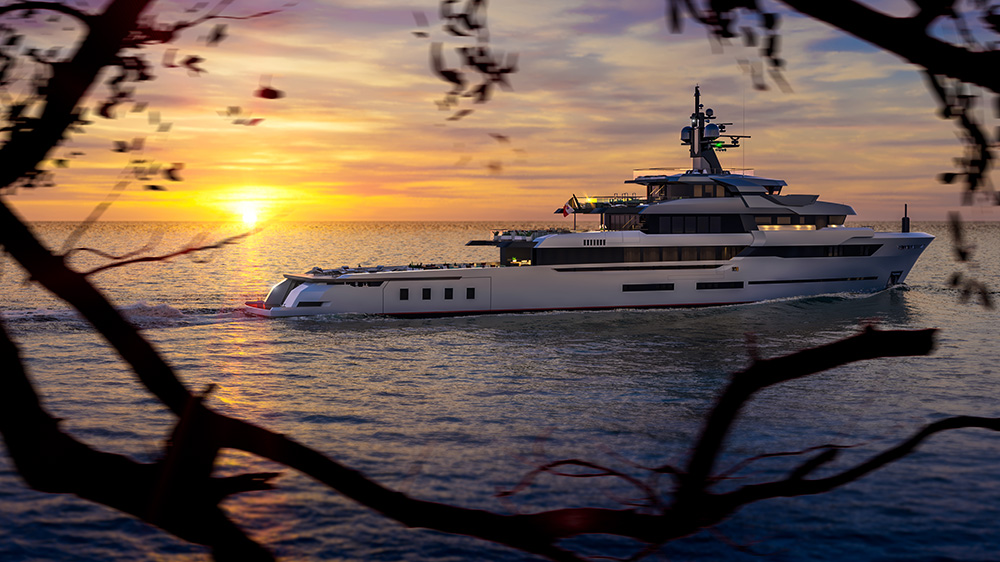 Hot Lab’s fresh take on the new 220-foot explorer yacht for Viareggio Superyachts (VSY) includes a tiered profile, a long, open stern, and a luxury interior. The Milan-based design studio borrowed the superstructure style from commercial and military vessels because it provides excellent visibility forward and frees up 150 feet of space in the stern.

Instead of the usual deck for a helipad and tender storage, Hot Lab decided to put in a long swimming pool and patio with a cool diamond motif on the main deck—which, in fact, doubles as a helipad. In addition, the designers also did away with the usual stairs aft from the main deck to the swim platform. Instead, the yacht features stairs from the garage/beach club inside that lead up to main deck. An exterior social area on the upper deck in front of the wheelhouse provides a panoramic view of the water, and it sports a small infinity-edge pool. Owners and guests can enjoy the best—and private—views in the inviting upper-deck crow’s nest.

The diamond motif on the main deck.  Photo: Courtesy of VSY

The yacht’s five staterooms can comfortably accommodate 10 guests along with a large owner’s suite and separate quarters for a crew of 15. The owner’s suite is located at the forward end of the upper deck for 180-degree views. It includes an office, a private studio, and his-and-her bathrooms.

Other highlights of this explorer include a skylounge with picture windows on an upper deck and two gyms—one in the beach club and another on the bridge deck. The interior, measuring 8,000 square feet, has an elevator connecting all the decks.

The tender garage houses three boats, two personal watercraft, and other water toys. The yacht is powered by twin 2,600 hp Caterpillar diesels, which will give the yacht a top-end speed of 17 knots. At 12 knots, it will have an estimated range of 5,000 nautical miles.