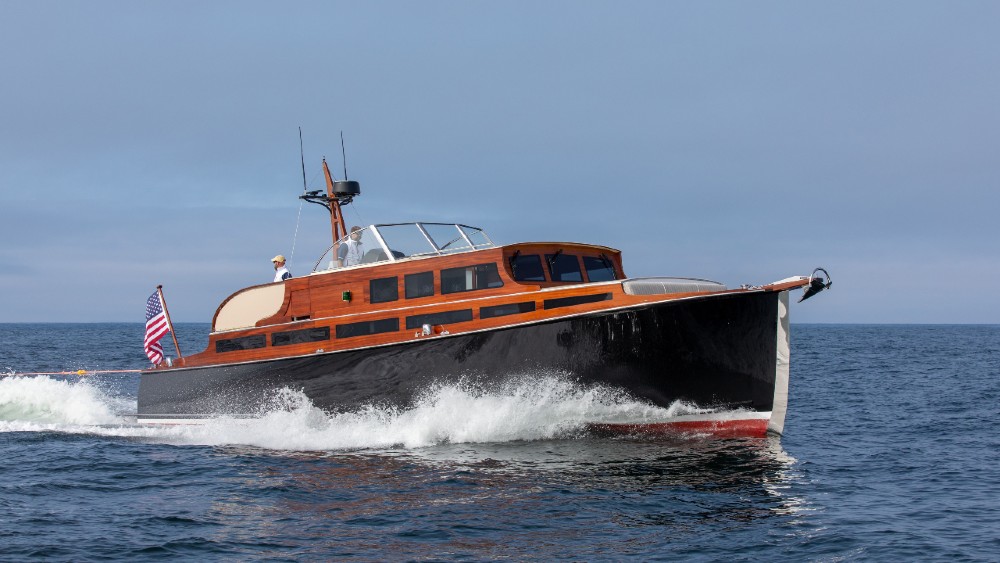 It’s not only classic ’55 Chevys and ’60s Chargers that can get the restomod treatment. Boats can, too.

Take the classic, 48-foot Huckins Fairform Flyer named Avocette III, an elegant, mirror-varnished fast cruiser built back in 1930. After literally rotting away for years—almost to the point of no return—this, the oldest Huckins in existence, has been brought back to life, lovingly restored to better-then-new condition.

But instead of a traditional restoration, Avocette III became a restomod for the water. Old gas motors were replaced with state-of-the-art Volvo IPS turbo-diesels with pod drives, gyro-stabilizers were added to calm any roll, and the latest in marine technology—from GPS chart-plotters to joystick controls—became part of the helm.

Modern furniture along with period pieces, such as the art-deco fireplace the owner found in an antique store in London, give the boat its authentic-but-stylized feel.  Courtesy of Billy Black

Yet this is only half the story. To find out the other half, we called up legendary American naval architect Bill Prince who was tasked with the keel-to-radar-mast redesign. According to Prince, the story of Avocette III began in 1931 when the Florida-based Huckins Yacht Corporation displayed its latest Fairform Flyer 48-footer at that year’s New York boat show.

A wealthy, 30-year-old New Yorker called Fred Voges fell in love with the sleek, mahogany motoryacht. But with the Great Depression in full swing, he wasn’t prepared to pay owner Frank Huckins’ $27,000 asking price. After some tough negotiating, he got it for just $17,000.

Voges fully embraced life aboard his new Huckins, using the yacht to commute from his Long Island home to Manhattan, and entertain aboard the likes of dancer Ginger Rogers, and showgirls from the Ziegfeld Follies.

The oldest known Huckins in existence, the boat is now wider and faster, while retaining its original elegant lines.  Courtesy Billy Black

After owning the boat for almost 50 years, Voges reportedly sold it in 1980. Without his care and pocketbook, it fell into disrepair. Then along came boat-lover Jerry Bass of New Jersey, who rescued and restored the sleek Huckins, keeping it until his death in the early 2000s. But by 2012, the yacht had once again deteriorated and was in desperate need of restoration. Which is when boat restomod specialist Bill Morong, owner of Yachting Solutions in Rockport, Maine, stepped in to acquire the sorry-looking yacht with the aim of finding a passionate and deep-pocketed enthusiast to fund a full restoration.

“The boat was in terrible shape,” Prince tells Robb Report. “Her hull was bent and twisted. She had really fallen on hard times. But in January 2016, I got a call from Bill Morong, saying he had a buyer in place who wanted to restore the yacht. Would I be interested in helping bring her back to life?”

Morong had convinced the new owner to do a restomod restoration, keeping those iconic lines, but adding new technology and custom features. It would be Prince’s job to come up with the new design and engineering. It would be Yachting Solution’s to do the time-consuming and complex restoration.

The interior has a retro look, but everything was modernized to make life aboard comfortable.  Courtesy Billy Black

Because classic ’30s yachts tend to be narrow-hulled and roly-poly at anchor, the owner also requested a hefty Seakeeper 5 gyro stabilizer to eliminate roll.  “All this added weight and shifted it to different places in the boat. It was one huge 3-D puzzle,” says Prince.

To compensate for the extra weight, two inches were added to the sides of the hull to increase buoyancy. Because the yacht would have more power, Prince refined the shape of the hull below the waterline for a calculated new top speed of over 42 mph. As for the hull itself, the original plank-on-frame construction was replaced by a “cold-molding” technique. This involved four layers of quarter-inch-thick sheet plywood epoxied together for strength and reduced weight. That was sheathed in an outer layer of fiberglass and painted Ferrari black.

Avocette III‘s running surface was modified so that it could reach a top speed of 42 mph with its modern Volvo engines.  Courtesy Billy Black

And, as a nod to blending old with new, that wooden mast carrying the radar dome isn’t actually wood. It’s welded aluminum that was hand-painted with a facsimile wood-grain effect.

“We’re really pleased with how the boat turned out,” says Prince. “Avocette III has been given another chance at life. Yes, the boat is different now, for sure. But better in so many ways.”

Adds Prince: “I think her original builder, Frank Pembroke Huckins, would have approved.”