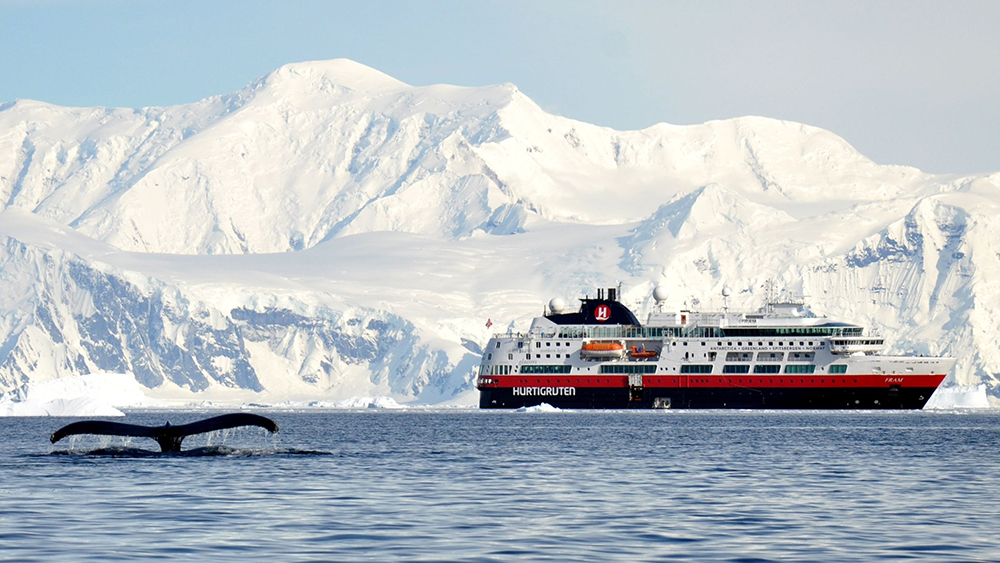 We still have a year and a bit till the total solar eclipse, but several expedition companies are already gearing up for the astonishing planetary display. And while there are a number of dedicated voyages to Antarctica that will get you front and center for the momentous event, only Hurtigruten will do it with the world’s first hybrid-powered expedition ship.

On Thursday, the Norwegian company announced a new line of 2021 solar eclipse voyages that will be carried out by the industry’s most advanced and environmentally friendly ships.

“We will sail both the world’s first hybrid electric-powered expedition ship, the MS Roald Amundsen, and her sister ship, the MS Fram, to prime positions outside the South Orkney Islands aiming to see this spectacular natural phenomenon,” said Hurtigruten CEO Daniel Skjeldam.

The night sky from the deck of the MS Roald Amundsen  Photo: By Karsten Bidstrup

The MS Roald Amundsen—the first in the world to use battery packs combined with low-sulfur diesel to power a cruise ship—embarked on its maiden voyage to Antarctica earlier this year. This time around, in addition to seeing the seventh continent in all its glory—think icebergs, penguins, seals and whales—travelers will have front-row seats to the spectacular solar eclipse, which will not occur for another 75 years.

Hurtigruten has also recruited a team of experts in scientific areas, such as marine biology, glaciology, oceanography and photography, to provide adventurers with insights on the eclipse while cruising. There’s even a science center on board where guests can play with microscopes and other scientific equipment to learn about the waters which the ship is traversing.

A suite aboard the MS Roald Amundsen  Photo: Courtesy of Hurtigruten / Espen Mills

“We aim for all Hurtigruten sailings to be life-changing and transformational,” said Skjeldam. “These experts will further deepen and expand this unequaled possibility to experience one of nature’s most striking events.”

Despite its size—the gargantuan vessel boasts 11 decks and 265 cabins—the MS Roald Amundsen is replete with classic Scandinavian design and has that all-important luxurious touch. The expansive suites have generous windows to take in the incredible vistas, as well as heated bathroom floors to keep you nice and cozy. There’s nothing like five-star luxury to make that extraordinary planetary feat even more memorable.

For more information about the Antarctic solar eclipse voyages, visit the Hurtigruten website or call Hurtigruten at 1-866-679-8305.