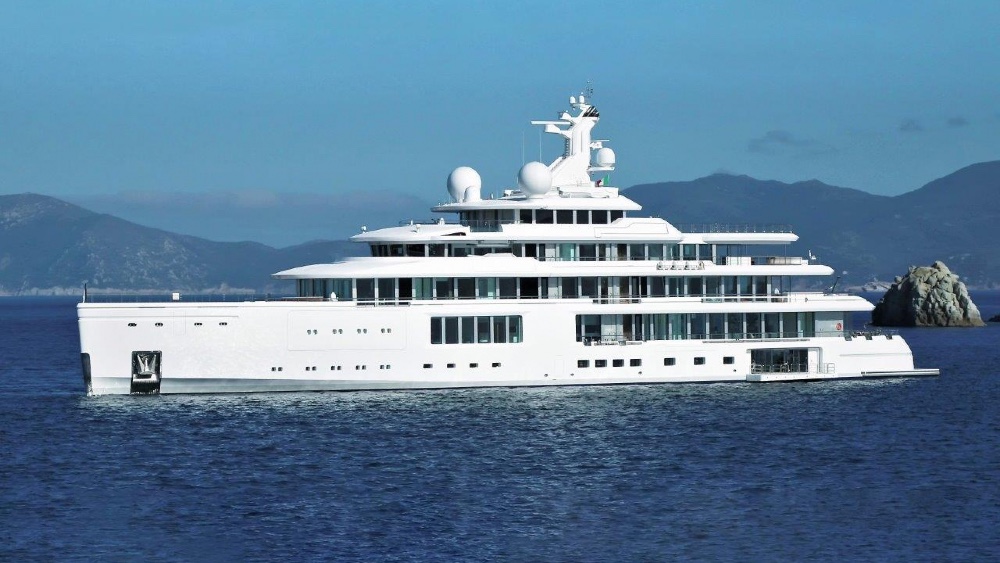 It seems incomprehensible to design a superyacht from the inside out, but when the end result is as strong as 353-foot Luminosity, perhaps it’s the way forward.

Delivered in 2020 by Italian yard Benetti, the vessel is a hybrid, but with 2,600-square-feet of main deck windows. Suffice to say, she breaks away from conventional yacht design. With both interior and exterior by Zaniz Interiors, supported by Andrew Langton and Giorgio M. Cassetta, the devil is definitely in the details. That approach is somewhat of a calling card for Zaniz, who goes by first name only and, before Luminosity, endured 20-plus years of watertight non-disclosure agreements.

“Nobody has allowed me to show anything about any project,” Zaniz told Robb Report. “It’s been like that for pretty much my whole life, except for Donald Trump who allowed me to show stuff, but I chose not to. When Luminosity came along, it was the first time I’ve been able to really say what I want to say about design.”

“Luminosity” has one of the most creative interiors of any recent superyacht launches.  Benetti Yachts

And there’s a lot to say. The biggest impact that the designer’s inside-out methodology had on Luminosity’s exterior was the need to have a 9.8-foot minimum ceiling height on the main deck, which seems palatial on a yacht. Even the owner’s deck has a height of 9.1-foot. The strict stipulation ties to the owner’s belief that luxury is defined by “the volume of space and the air that you breathe.”

For Luminosity, whose owner is a serial superyacht builder, the creative interior is founded upon four main drivers: natural light, connectivity to the sea, timeless classic and, in a personal cue, a timeline of “art periods from his lifetime,” according to Zaniz.

These sources of inspiration can be found throughout, from the sea creature-like chandelier in the dining room, made from 700 hand-blown crystal bulbs in an homage to Thomas Edison, to the engraved mullions on the bank of oversized glass windows on the main deck. On each mullion is written an excerpt from Moby Dick, which, as Zaniz notes, allows visitors to “walk around the entrance hall and main salon and read this timeless classic of the sea.”

This wall is a full projection screen, which the owners can change from tropical forest to sunny meadow, or any other scene. The stairs pass through the illusion.  Benetti

The extensive beach club on the lower deck has a plunge pool, swimming pool (with rising dance floor) and a steamroom with side doors that open up at sea level. That fills the owner’s request for space, volume and privacy. Fingerprint security ensures that large parties can be held on board with guests, but they will be unable to access the rest of the yacht unless invited.

Each color, texture and soft furnishing has been selected to reflect the sky and the ocean, both cloudy days and sunrise horizons. And, of course, there’s the owner’s brief. Alongside the wow factor, the yacht needed to work for his multigenerational family, including disabled access and flexible spaces that enable long periods to be spent together on board.

Perhaps the most impressive element of all is the glass stairwell with its cathedral-like stream of light and the glass box elevator with its illuminated floor, clear acrylic handrails and seamless glass ceiling. Both are backed by a forest wall made from an interactive digital display that is embedded with sensors that react to movement. So, as guests ascend the five decks, electronic butterflies fly away (or fireflies at night), and the trees sway.

The glass house and private deck in the master suite.  Benetti

“There are certain psychological things that you can do to feel cooler when in a hot climate. One is the physical movement around you, so I wanted branches and leaves to slowly move as though a breeze is coming through,” says Zaniz. “I wanted the sensation of floating through the forest to the sky while looking to the sea.”

For Zaniz, the psychology of an interior space is critical to the success of any design. But a sophisticated playfulness is where the sense of theatre, fun and magic can also be found. And that is represented in abundance on board Luminosity.

Check out Luminosity‘s other treasures.