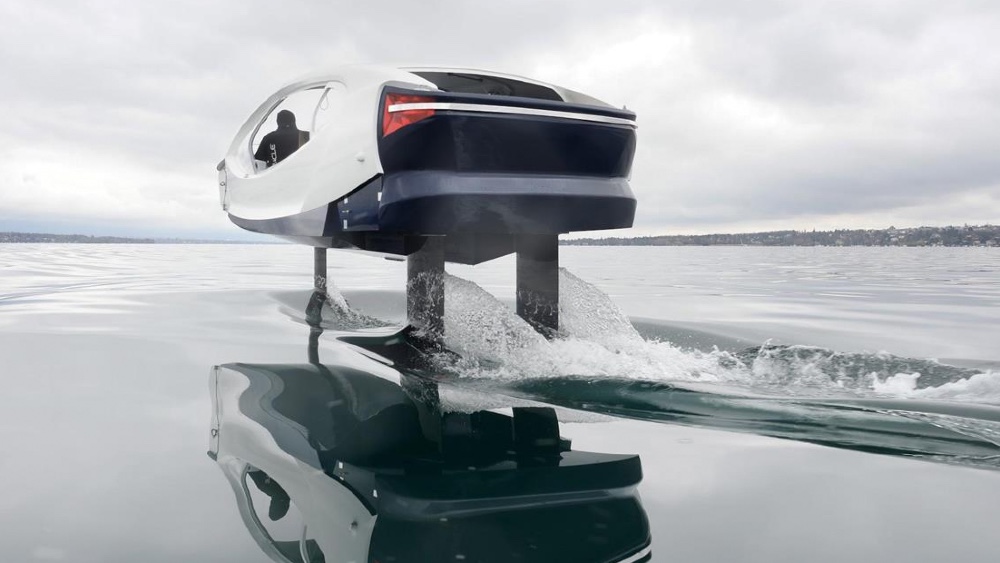 All Images Courtesy of SeaBubbles

Electric vertical takeoff and landing (eVTOL) aircraft are all the rage in the aviation field, but the boating field has been much slower to adapt to electric vehicles, especially with e-water taxis. A French company called SeaBubbles has been a leader in the field with an innovative and cool-looking electric water taxi that runs on hydrofoils. The design means zero waves, emissions and noise while it glides across the water, dropping its passengers from dock to dock.

Alain Thébault, who conceived the project, told Robb Report that he wants to open waterways around the world to electric taxis. As the Uber Lift has identified the air space above cities as the way to eliminate ground traffic, Thébault sees waterways as another way to move urban residents.

The SeaBubbles service will first start in Paris, where the company just made a live demo, followed by Lyon, France, and then Geneva and Zurich, Switzerland. The US is next.

Running on foils, the five-passenger water taxi has a 40-mile range, or about four hours of running time, before the lithium-ion batteries need to be recharged.  SeaBubbles

“I’m dreaming of a water line between East Palo Alto and downtown San Francisco,” Thébault said.  “I never want to be stuck again on Highway 101.” Los Angeles could also have a SeaBubbles system that connects Malibu to Santa Monica, and run all the way to Newport Beach. He is also considering services in New York City, Miami, Seattle and Washington.

The SeaBubbles will employ specialized docks. It has a launch speed of 8 mph on just its hull, and as it raises on the hydrofoils, the cruising speed jumps to 16 mph and reaches a top speed of 20 mph. The craft will be powered by two 18-kW electric motors, fed by a 41 kW/h Lithium-ion battery pack. It will carry five passengers and have a range of more than 40 miles. The unit weighs 2,755 pounds and can handle a 1,100-lb. payload. It takes 35 minutes to recharge.

The water taxi will have a Fly-by-Wire system and the steering is done by joystick. Thébault says the hydrofoils keep the hull from rolling, preventing seasickness or violent rocking of the boat in big waves.

The company plans to start its initial service in Paris, then move to other cities in France, and eventually come to the U.S. and Asia.

The special docks will use renewable energy from water and solar power, and at times wind, to help recharge the boat’s battery packs.

Looking ahead, Thébault sees an even larger water taxi. Its HiBus, a giant version of the SeaBubbles, will carry 48 passengers with a hydrogen system for greater autonomy. This ambitious project will use a “wave-piercer” design, which is an aquatic system specially designed for locations where the regulations will not allow hydrofoil operations.

You can check out the SeaBubble in action below: