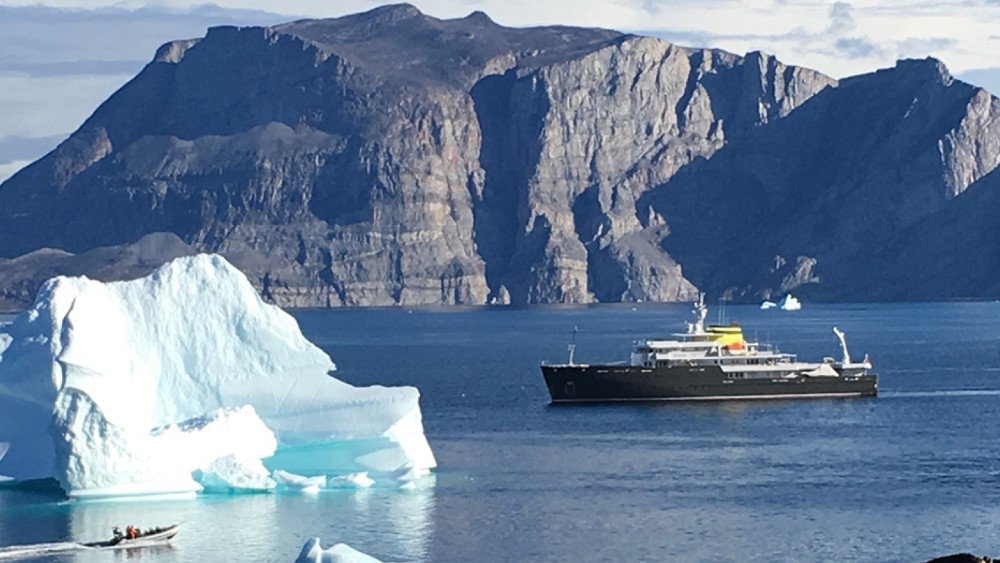 Few people have created a yacht with their favorite comic-book character in mind. In fact, the owner of the 251-ft. luxury ice-breaker Yersin carried it even farther by including a world-famous ocean explorer and renowned bacteriologist as the triumvirate that heavily influenced the design.

“I drew inspiration for Yersin from Jacques-Yves Cousteau, the great physician-bacteriologist Alexandre Yersin and the intrepid Tintin,” the owner told Robb Report. “These influences contributed to the ethos around the boat—A.S.E.—which stands for adventure, science and education.” Tintin, of course, was the Belgian comic-book character who traveled the world with his dog, Snowy, solving unsolvable crimes.

The owner—who, unlike his heroes, asked to remain anonymous—created something quite novel when he built Yersin, not only because it was an authentic explorer yacht, but also a “sustainable” project from France’s Piriou shipyard. Classified as a Bureau Veritas Clean Ship, its decks are made from non-wood recyclable resin and its exhaust catalysts filter 99.8 percent of fine particles. An advanced water treatment kills resistant bacteria, and the hull is coated in silicon non-biocide and antifouling paint, so that the boat won’t carry potentially infectious microbes on its voyages. On board, it’s equipped with scientific laboratories to facilitate academic research on new species.

The go-anywhere explorer was designed to leave no footprint.  Courtesy Fraser Yachts

So that takes care of the Cousteau and Yersin elements. In Tintin mode, the owner and his crew have traveled the world since the boat’s delivery in 2015, from tundra at the Arctic Circle to palm-fringed islands of Micronesia.

The maiden voyage was extreme and arduous, hundreds of miles of cruising in remote parts of Iceland and Greenland, then crossing Baffin Bay and cruising down Baffin Island, through Labrador, Newfoundland and New Brunswick, ending the journey in Nova Scotia. On this voyage of discovery, the yacht encountered polar bears—“five, including a couple of cubs”—on Baffin Island, ice floes, gale-force winds and night-long sightings of the northern lights, or aurora borealis.

Greenland was his favorite. The island country—slightly bigger than Austria, Belgium, Denmark, France, Germany, Ireland, Italy, Poland, Portugal, the Netherlands and the United Kingdom put together—had wide open spaces, with plenty of local fauna and wildlife. “The landscape is vast, the air is free of pollution, so visibility is really clear,” he said. “Mountains 6,500-ft. high rise out of the sea. We came so close that we felt like we could touch them, despite being miles away.”

Tough on the outside, luxurious on the inside. Yersin‘s interior goes mano a mano with any expedition superyacht.  Courtesy Fraser Yachts

That same sense of awe came with the glaciers. “It is exceptional to be able to sail for days in that kind of landscape,” he says.

Yersin was designed for that kind of off-grid travel. The boat is ice-classed and capable of withstanding temperatures of -50 degrees. On top of that it has a 12,000-nautical range and can be autonomous for 50 days. Its tenders can carry ATVs for shoreside exploration.

Which brings us back to Cousteau and Yersin. “Piriou understood what I wanted to develop; an open-sea explorer capable of discovering the world without leaving any environmental trace of its passage,” the owner says. “Many places around the world only tolerate yachts with zero ecological impact. This means that Yersin explored places where no other boat has yet ventured.”

Who needs a movie screen when you have a window beneath the ocean’s surface?  Courtesy Fraser Yachts

That science included studying whales in Iceland, the formation of ice and glaciers in the fjords of Greenland, and sea scallop colonies in Novia Scotia. “In Labrador, we were in an unknown and uncharted area. There are no boats there, so there are no set sailing routes,” says the owner. “Ships going there make their own route, so our journey is now on charts.”

Water depths are unknown in many places around the polar regions, so the crew used sonar to check for icebergs and rocks—a real necessity when cruising near Greenland’s Ilulissa region. It’s home to the 40-foot-long Jakobshavn Glacier, famed for producing the iceberg that sunk the Titanic.

After that very literal shakedown cruise, Yersin has traveled the globe for scientific research, from exploring the 607 islands of Micronesia to crossing the Atlantic to the Caribbean.

The conference room is designed for researchers.  Courtesy Fraser Yachts

During that time, Yersin’s owner has shared his passion with the scientific community, welcoming researchers on board. Where possible, the yacht partakes in the production of natural history documentaries.

But after six years, the owner has put his beloved explorer up for sale. Even Tintin had to go home.

“I hope the next owner will share the same passion as me for the environment,” says the owner. “I hope Yersin’s legend will continue.”

The pilothouse has one of the owner’s favorite explorers, Tintin, looking down from his boat.  Courtesy Fraser Yachts

Yersin is now listed for sale for €59 million, or about $69.2 million, with Fraser yachts.