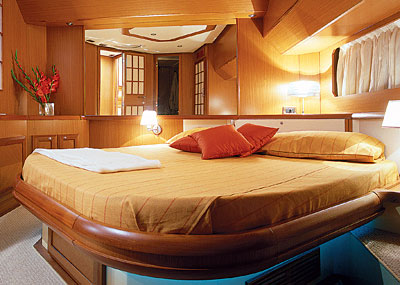 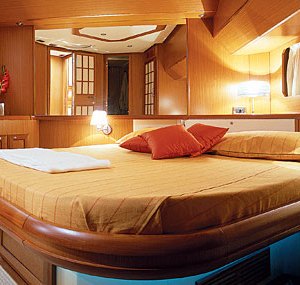 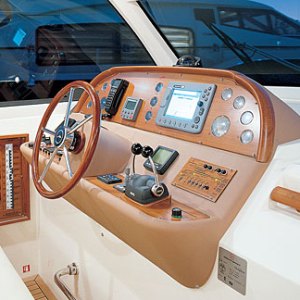 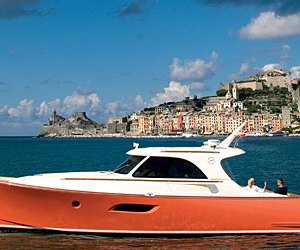 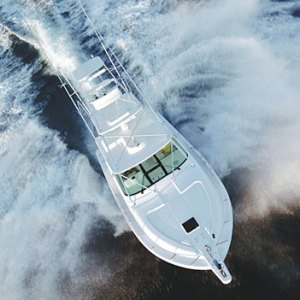 Something about this Pershing 90 is different. The original 90, a black and silver convergence of a speedboat and a luxury yacht that debuted in September 2005, dazzled with its speed and aggressive-looking design. Here was a boat that produced 4,900 hp and reached 51 mph, while its combination of straight lines and soft curves seemed to spring from a Formula One designer’s notebook. Until now, the vessel’s performance and appearance had been impressive, but its fairly crowded interior had been underwhelming. But this new silver and gray Pershing, a model revamped especially for North American boaters, rectifies that situation. Indeed, it contains its own theater.

At the head of this empire is 60-year-old Norberto Ferretti. He began his yacht brand acquisition spree in 1998, purchasing eight brands in quick succession, and now his consortium employs some 2,800 people in Europe and the United States. In October, shortly after the Pershing 90 and other Ferretti yachts appeared at the Fort Lauderdale International Boat Show, the British private equity firm Candover purchased 60 percent of Ferretti Group for about $2.2 billion. Norberto retains a significant equity stake, however, and the company says that he intends to stay on as chairman.

Norberto, a personable character with longish hair and a trimmed beard, started out in the auto business, going to work for his family’s car dealership in Bologna in the 1960s, when he was still in his teens. He spent three years as a mechanic, but after moving into sales he wanted a career change. In 1968 he convinced his father, Otello, to purchase a nearby boating shop, and in 1971 he and his brother Alessandro introduced their first motor sailer at the Genoa International Boat Show. The Altura 33, the world’s first fiberglass motor sailer, followed. Over the next two decades, under a variety of names—Ferretti Nautica, then Ferretti Craft, then Ferretti—the company built luxury motor yachts with a range of innovative features, including an interior passageway from salon to flybridge and swinging salon windows opening onto the stern deck. The company moved to its current headquarters, in Forlì, Italy, in 1987. When it began acquiring companies about 10 years later as the Ferretti Group, it gave the boatbuilding operation the new name Ferretti Yachts.

Although he became disenchanted with the auto business, Norberto retained his passion for cars, and over the years he has amassed an eclectic collection of vintage models, some of which he races in the Mille Miglia, the Gran Premio Nuvolari, and other vintage rallies. The rarer members of his collection include a 1936 Mercedes-Benz 500K roadster one of only nine surviving examples from a production run of just 354—a prewar Mercedes-Benz 170, a Mercedes SL gullwing, and a number of Porsche, Maserati, and Ferrari models from the 1960s. For its sentimental value, one of his favorite cars is a canary yellow Ferrari 250 GT SWB that once belonged to his brother. (Alessandro, who handled the group’s business side, passed away in 1995.)

The former auto mechanic became a hands-on chairman who typically tests the company’s latest R&D projects aboard his 101-foot Custom Line Navetta before giving them his blessing for production. Enhancing the yachting experience follows a more scientific path at the Ferretti Group’s recently formed Advanced Yacht Technology Center in Forlì. There, more than 100 Ferretti engineers work on projects such as integrating advanced entertainment systems into boat interiors or building oversize windows in belowdecks staterooms. “We spend a lot of time testing,” Norberto notes during a conversation at the Fort Lauderdale show. “Some companies make boats so they just look good. We make them to be used.” He places a special focus on giving boaters access to the water. “In 1985, we added a 3-foot swim platform to the transom of a 24-foot yacht. People said we were crazy then, but now everyone is doing it. Why own a boat if you can’t enjoy the water?”

Vice president of engineering Andrea Fabretti oversees the Ferretti Group’s technical efforts, managing the company’s in-house design team as well as about 50 commissioned designers and naval architects. “Our approach is to develop an innovative product and then spread it across our brands,” says Fabretti, who also has made the trip to Fort Lauderdale. Perhaps the most revolutionary of these products is the ARG antirolling device that Ferretti engineers, working with Mitsubishi, invented in 2004. The technology makes being at anchor a much less trying experience for someone prone to mal de mer. “Of course,” Norberto says, “now other boatmakers are rushing to build their own antirolling systems.”

In the twilight of an October day in Fort Lauderdale, a Mochi Craft Dolphin 44 glows a soft orange as it reflects the sunset. With its coral-colored exterior and tinted wraparound windows, the 44 makes quite a nautical fashion statement. The boat, which Mochi Craft introduced in Europe in 2005, only recently reached U.S. shores. Like the first Dolphin, a 51-footer that debuted in 2003, and the 74-foot version that arrived a year afterward, the 44, displaying the sinuous curves of its animal namesake, is a stylish interpretation of a working man’s craft.

The Mochi Craft line was the brainchild of Norberto, who long had dreamed of creating an Italian lobster boat. When he purchased Pesaro-based Mochi Craft from Luciano Mochi in 2001, it was a foundering builder of white flybridge boats. Norberto dropped the flybridge line, then introduced the Dolphin in 2003. Given its radical yoking of two entirely different boat styles, the Dolphin easily could have been a colossal failure, but instead it has seduced boaters throughout the world. A 64-foot version that was introduced in October already is sold out through 2007, and the Ferretti Group expects to increase its output of Mochi boats by one-third next year.

Apreamare also has based its wooden motorboats on a fishing vessel, the gozzo sorrentino, which is distinguished by a hull that is rounded at both ends. Current managing director Cataldo Aprea, whose family has been building boats since 1849, added a fiberglass planing hull to the gozzo design in 1988. The hull rides on top of the water, boosting the vessel’s speed but retaining its stability in rough seas.

The Apreamare 65 Maestro, introduced in late 2005, departs from the traditional gozzo shape but still evokes the Apreamare heritage. Designer Giovanni Zuccon says that he worked to fashion “not a luxury apartment on the water but a boat for a sailor who likes the simple life. I want owners to be able to use this boat rather than maintain it as a showpiece.” He kept much of the cockpit open rather than cluttering it with furniture, and he equipped the yacht with such high-tech features as long roll-down side windows and the ARG antirolling system.

Zuccon also modernized the Bertram line, a task that he says was particularly challenging. Sport fishermen revere the American brand, which Ferretti resurrected from bankruptcy in 1998, and Zuccon understood that tampering too dramatically with the design could be disastrous. He therefore employed a light touch, retaining the boat’s trademark deep-V hull while incorporating creature comforts, such as twin beds instead of bunks in the cabins, and putting subtle curves into what had been a straight-edged exterior.

The Ferretti Yachts 630, the brand’s latest model to arrive in the United States, is another craft designed to appeal to Americans. Norberto wanted the 630 to retain the brand’s fairly traditional exterior appearance, but he gave Zuccon some latitude with the interior. “The 630 is my favorite in the Ferretti Yachts line,” Zuccon says. “We created a new concept of space on it, with a 360-degree view of the water through the windows and an open galley between the cockpit and salon.” He refers to the large open salon as an “American family room” and points to the curved, specially designed windows that add light to the soft-colored decor.

Zuccon also designed the Custom Line series, Ferretti’s fiberglass yacht line that includes 94- and 112-footers with planing hulls as well as 101-foot Navettas. The latest launch is a 97-foot yacht that replaces the 94. “We designed more space into the yacht,” says Zuccon, noting that it now has five staterooms instead of four. The vessel also has large oval windows in the cabins that provide a water’s-edge view of the sea. In addition, Zuccon made the flybridge more user-friendly by adding a sunroof to the hard top, and he placed a sunning and socializing area next to the helm station. About a week before the Fort Lauderdale boat show, the Mochi Craft Dolphin 44 took a run in Miami’s Biscayne Bay. After being lowered 70 feet to the water from an Italian-flagged container ship by a massive crane and sling, the Dolphin headed north toward the Atlantic. Captain Pete Bronkie drove the boat hard at about 35 mph, but the run was pleasantly uneventful compared to what could have been a roller-coaster ride on a lesser boat.

The Dolphin 44 is one of the better examples of Norberto Ferretti’s notion of how to build boats: You constantly improve the performance and the technology, and you bring to each design a striking and even playful sense of style. The 44’s coral color and lobster-boat profile make it impossible to ignore, but the boat’s appearance is not jarring, largely because of its elegant lines and stylish touches that include an old-fashioned barometer positioned next to a flat-screen plasma TV over the helm. And like all Ferretti boats, the 44 is full of new concepts: Take, for example, the hidden garage for a rigid-bottom inflatable, something highly unusual in a vessel of this size, and the unorthodox cabin layout, with its oversize staterooms and space for a laundry room.

As for the redesigned Pershing 90, its interiors are high and spacious throughout. The cockpit, with two sofas and a large table, is one of the vessel’s largest and most comfortable areas. The expansive master and VIP cabins seem even larger because of the electric beds that fold back to provide more floor space. The reconfigured tender garage opens without disturbing sunbathers on the deck above. And the theater can seat as many as eight people. But none of these changes have affected the exterior, which continues to exhibit a sleek, lean, racecar profile.

When asked about his main goal in design, Norberto says, “We aim to create solutions for the yachting lifestyle—before anyone else realizes there are problems!” It is a philosophy that carries across the entire line.