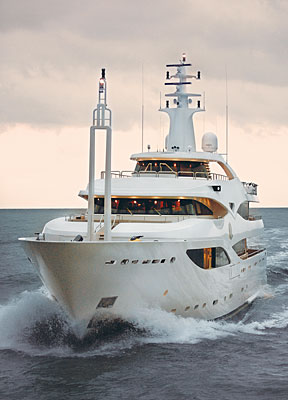 In the 1880s, in Sarnico, Italy, Ernesto Riva became the first boatbuilder to fit piston engines to boats. As the years passed, the Riva family company continued to introduce technical and design advances, first as a raceboat maker, then as a builder of pleasure boats that were embraced by jet-setters of the 1960s. The brand languished after the departure of president Carlo Riva in 1971, but following its acquisition by the Ferretti Group in 2000, it has reestablished itself as a premier marque. The brand has succeeded by applying Italian styling to that 1930s American invention, the cabin cruiser. This is especially evident in the new 75-foot Venere (Italian for “Venus”).

Styled, as are all Rivas, by Mauro Micheli of Officina Italiana Design, this 38 mph beauty borrows its sweeps and fins from the 115-foot Riva Athena, but the huge trapezoidal, seamless-glass window and sports car–style seating in the flying bridge are all its own. The Venere’s huge interior holds four en suite staterooms, two crew cabins, a tender garage, and the engine room. Micheli’s innovative space planning continues to the main deck, where interior stairs lead to the flying bridge and an enclosed galley discreetly screens the inside helm station from the salon and separate dining area.

As the Ferretti Group has, with its various brands, launched dozens of boats that are shorter than 100 feet, it also has restructured and reenergized its megayacht marque, CRN. That boatbuilder’s early efforts—with the exception of F-100 (1983), Azzurra (1988), and Lady Anne (1994)—were less than stellar. But with its recent launches of the 177-foot Ability and 197-foot GiVi, CRN has become something of a 43-year overnight sensation.

When Ferretti acquired CRN in 1999, it put the underutilized facility in Ancona, Italy, to use building boats for its Custom Line brand while placing its entire superyacht business under a microscope. “The discussion was, should we go along building a few big boats, abandon big boats altogether, or invest and grow?” says CRN president Lamberto Tacoli.  Pumping his fists for emphasis, he delivers the verdict: “We grow!” So, with about $128 million in investment capital and a workforce that has grown to more than 400 (from about 60 two years ago), the company has more than doubled its production. The Ferretti Group has employed its big-yacht expertise to build 115-footers for Riva, 112-footers and the 101-foot Navetta for Custom Line, and a new 141-foot CRN. But CRN’s showcases are Ability and GiVi, both styled by Zuccon International. The 730-ton Ability dazzles with its master-suite terrace overlooking the sea, which is usable even when the yacht is under way, and a Turkish bath and exercise room overlooking a deck that is just steps from the sea. This latter design theme—a sea-level beach club, in effect—is repeated in GiVi and will appear with minor variations in the next three CRN builds.