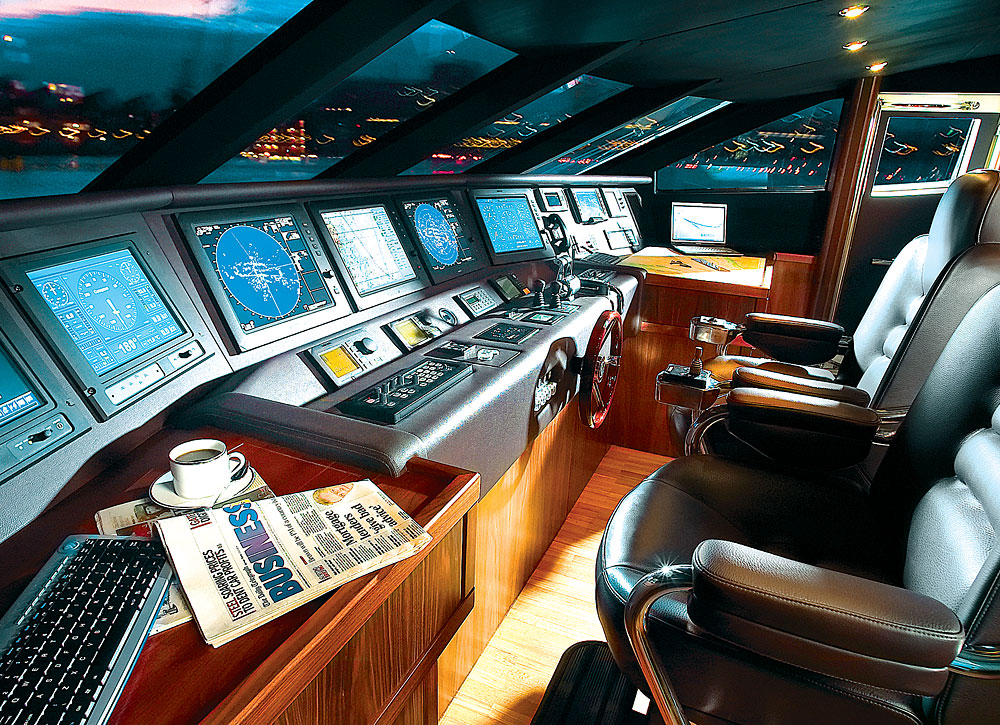 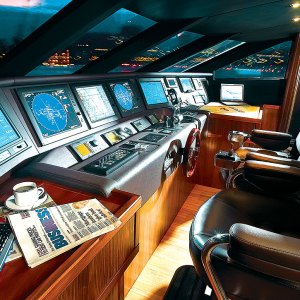 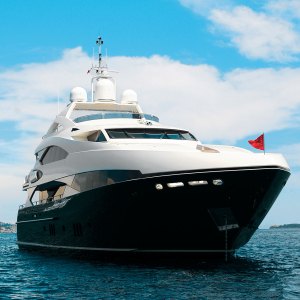 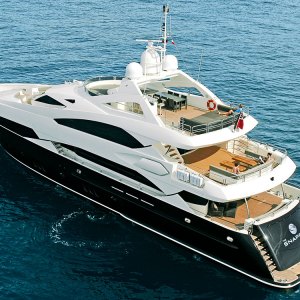 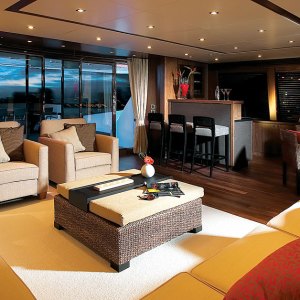 Eddie Jordan knows a thing or two about fast, technically advanced, and elegantly designed vehicles. He began racing cars professionally in 1974 and won the Irish Formula Atlantic championship in 1978. A year later he founded Eddie Jordan Racing, which took top honors in the British Formula Three circuit in 1987. And Jordan Grand Prix, which Jordan launched in 1991, built racers that won several Formula One trophies, including those for both first and second place at the 1998 Belgian Grand Prix.

Jordan’s fondness for speedy and spectacular vehicles extends to the nautical variety. His new superyacht, Snapper, was a sensation at September’s Monaco Yacht Show. The $20 million craft, the first in Sunseeker’s new 37-Meter Tri-Deck line of semicustom yachts, is the largest and most lavish vessel ever made by the British boatbuilder.

The name Snapper recalls the word whippersnapper, a term that applied to Jordan fairly well, he says, as he grew up in the seaside town of Dunleary, Ireland. “I was a bit of a scrapper,” he remembers. “I loved action. I raced sailboats from a young age. And I told myself that, as soon as I earned some money, I’d get myself a really fine boat.”

By the mid-1980s, with his racing team winning on a regular basis, he had enough cash to do so. “A boy who drove a car for me—his father was Don Shead,” Jordan recalls. “Don was designing hulls for a fellow named Robert Braithwaite, who was building boats in England. He introduced me to Robert.”

Shortly after that introduction, Jordan ordered from Braithwaite the first of seven Sunseekers that he has owned over the years; Jordan has named four of them Snapper.

About a month after the Monaco show, on a rainy afternoon during the Fort Lauderdale International Boat Show, Robert Braithwaite, Sunseeker’s founder and chairman, sits at a table in the salon of another 37-Meter Tri-Deck. This one, M4, is hull number two and is owned by a Mexican businessman.

A handsome, silver-haired gentleman of 63, Braithwaite conveys considerable warmth. Nearly everyone in the boating industry will tell you he is a nice guy who works extremely hard. “I left school at 14 and started learning the business,” he says. “My parents ran a marine service shop in Poole,” a town located along the English Channel just west of Southampton. “So I started out servicing engines,” he continues, “but I always wanted to make boats. I built my first one in 1968, a 17-footer. Meanwhile I saw ads for superyachts in magazines and thought, ‘I can do that.’ ”

Forty years later, Sunseeker has become one of Europe’s most prolific yacht builders. With a workforce that exceeds 1,200, the company produces about 300 boats per year in three shipyards, all of them on Poole Harbour. Throughout its growth, Braithwaite and his family have retained ownership of the firm; his brother, John, oversees the yachts’ engineering and exterior styling.

The company originated as Poole Powerboats, a maker of small, open-cockpit speedboats. In 1972, Braithwaite recalls, he was exhibiting a range of models at the London Boat Show when F/1 driver Henry Taylor passed by the stand, looked at a boat, and said, “If you could put in a full-width sun bed, I might be interested.” Braithwaite complied, and thus began a new line of boats that bridged the gap between sports craft and family cruisers. The line started with the sleek, two-berth Sports 23 and the Daycab 23, a deep-V, four-berth day cruiser that could plane at 41 mph. At the time, Braithwaite was expanding his sales into the Mediterranean region, and so he changed the company’s name to Sunseeker, which he deemed more universally marketable than Poole Powerboats. The Daycab 23 was the first vessel to carry the Sunseeker name.

A few years later came another pivotal moment in the company’s evolution. “I met Don Shead in the late 1970s,” Braithwaite recalls. “He was famous in powerboat racing, and he agreed to create hulls for us.” Shead was an expert in below-the-waterline physics, and he also had designed superyachts, but he never had been involved with production cruisers. However, he saw possibilities in working with Braithwaite. The collaboration produced the Sunseeker Offshore 28, a radical, lightweight, twin-engine craft that achieved 46 mph and featured an extraordinarily comfortable interior.

In the early 1980s, Sunseeker refined its identity as a maker of yachts that featured both power and luxury. One of the better examples of this combination was the Sunseeker XPS 34, designed by Shead. Another was the Cobra 39, which reached 58 mph. Meanwhile, the company also constructed pure pleasure machines, such as the Portofino 31, a wide, comfortable, two-cabin vessel, and the Malibu 47, the company’s first big offshore cruiser. But as Sunseeker customers increasingly demanded larger yachts, performance became an issue. Braithwaite understood that it would be impossible to use the conventional technology of the time to build a smooth-running, 60-foot vessel capable of 45 mph or so.

Then his engineers had an idea. They had seen how well water jets performed on larger craft, but no one yet had considered installing them on a leisure boat. In 1990, at the Southampton Boat Show, Sunseeker displayed the Renegade 60, which reached 55 mph thanks to jet drives that expelled 32,000 gallons of water per minute. According to company lore, even competitors at the show applauded the boat—although “the public was slow to warm to it,” Braithwaite says. “It was just too innovative.” Soon afterward, Sunseeker launched the Superhawk 50, which was the first production craft equipped with Arneson surface drives, features that had been developed for raceboats. Here was a 52-foot luxury yacht that offered three-cabin accommodation and reached 58 mph.

“But one of the biggest breakthroughs,” Braithwaite says, “was the Manhattan 58. That was the first boat Ken Freivokh did for us.” Freivokh, a young naval architect and stylist, was known at the time for his imaginative use of space on megayachts. In 1993, when the Manhattan 58 flybridge yacht was introduced, most production-boat interiors displayed chrome and peach decor and boxy designs. By contrast, Freivokh’s interior for the 58 featured curving settees, rounded woodwork, plump upholstery, and high-gloss cherry joinery. “That boat didn’t sell too well either,” Braithwaite says. “People thought it was outrageous. But by the time Ken did our next boat, the Manhattan 62, they were getting used to it, and sales went through the roof.”

As the 1990s progressed, Sunseeker designed yachts in four categories: performance, high performance, offshore cruiser, and flybridge. The 37-Meter Tri-Deck is the latest addition to the company’s flybridge group.

Braithwaite rises and begins a stroll through the 37-Meter Tri-Deck. Contrary to its name, this 121-foot-long, 26-foot-wide, 31-foot-tall vessel actually has four levels: lower deck, main deck, upper deck, and sky deck. “What I wanted to do,” Braithwaite explains, “was produce an enormous feeling of warmth, like you would find in a country home.”

He has done that. On the main deck, past a semi-covered aft area and vast enclosed salon, is a dining room with a table that can seat as many as 12 people. Beyond the dining room is a full-beam master suite with a king-size berth and a bathroom with a spa tub and stand-up shower. This suite in Snapper had seemed spacious enough, but the one in M4 is even larger, because it does not include a large walk-in wardrobe, as Jordan’s does. “Sunseeker makes production boats, yes,” Braithwaite says. “But we’ll build the interior to the customer’s specifications. Our designer, Stuart Jones, handles that.” (Freivokh now serves as a consultant for Sunseeker; Jones took over in-house design duties in 2001.)

The upper deck contains another salon, the galley, the wheelhouse, and an open area for dining or sunning, while the sky deck holds a bar, a table that can seat eight, and a large hot tub. The lower deck contains two large staterooms and two twin cabins that altogether can accommodate as many as 10 people. Additional cabins, including a captain’s berth behind the helm, allow for a crew of eight.

“But it’s not just a matter of room,” Braithwaite says. “We also wanted this boat to outperform others in its class.” He notes that the Tri-Deck cruises at 21 mph and can reach 28 mph, which is an exceptional speed for a yacht this size. And its 1,700-mile range, though not sufficient for a transatlantic cruise, allows you to stay at sea for a good long time. Braithwaite adds that the vessel meets all European charter criteria, which are more stringent than those in the United States.

Sunseeker plans to launch its third 37-Meter Tri-Deck in January. As of October, the company had sold eight Tri-Decks and had a production backlog extending to 2011.

“I like to think I’ve helped Robert a bit,” Eddie Jordan says. “When you’re racing in F/1, you have to design a fast car that weighs no more than 500 kilograms [1,100 pounds], and boatbuilding is the same in many respects. It seems to me that, over the years, Robert has adapted some ideas from racecar design, like the use of carbon-fiber composite materials.”

The F/1 analogy grows more appropriate with each year. In 2000, Sunseeker launched the XS 2000, a 38-foot sportboat with a top speed of 75 mph. The craft, which is based on a design by raceboat creator Fabio Buzzi, has placed in several offshore endurance championships, including the annual run from Cowes to Torquay in England. Another race-bred Sunseeker is the Superhawk 43, a 44-foot vessel that achieves 58 mph. Even some of the company’s largest vessels resemble raceboats. The best example is the latest in its Predator series of performance motor yachts, the Predator 108, a 108-foot craft that can reach 37 mph. Sunseeker expects to deliver a 125-foot version called the Predator 128 in 2009.

Meanwhile, Braithwaite reports, the company will unveil a smaller version of the Tri-Deck, the 34-Meter Yacht, at January’s London Boat Show. The 110-foot vessel, which will consist of two decks plus a flybridge, will cruise as fast as 30 mph for about 1,450 miles. “We seem to have found a niche with this one,” Braithwaite says. “People are snapping it up. We plan to build two to three 37-Meters per year and about four 34-Meters per year.” Like the Tri-Deck, the 34-Meter Yacht has an order backlog through 2011.

Braithwaite says that, considering the demand for Sunseekers, he hopes to add about 150 people to the staff. As he recruits, he draws heavily from the population of Poole. Approximately 90 people, many of them Poole residents, are learning boatbuilding in his four-year apprentice program. “I’ve been told we could cut costs by moving the operation overseas,” he says. “But we wouldn’t get quality workmanship if we did. I’m committed to staying in Poole.”

Some apprentices graduate into Sunseeker’s Technology Centre, which opened in 2002. In this facility, which centralizes all the company’s technical operations, interior designers work alongside engineers and production teams, using advanced computational fluid dynamics, computer-aided design, and manufacturing software. The facility also is the test bed where the company develops new technologies and construction techniques.

Braithwaite observes that Sunseeker’s success stems largely from constant innovation—and he stresses that it cannot stop now. “One day,” he remembers, “an employee asked me, ‘Can we celebrate some day, because we’ve made it?’ I replied that the day we think we’ve made it, we’re dead.”