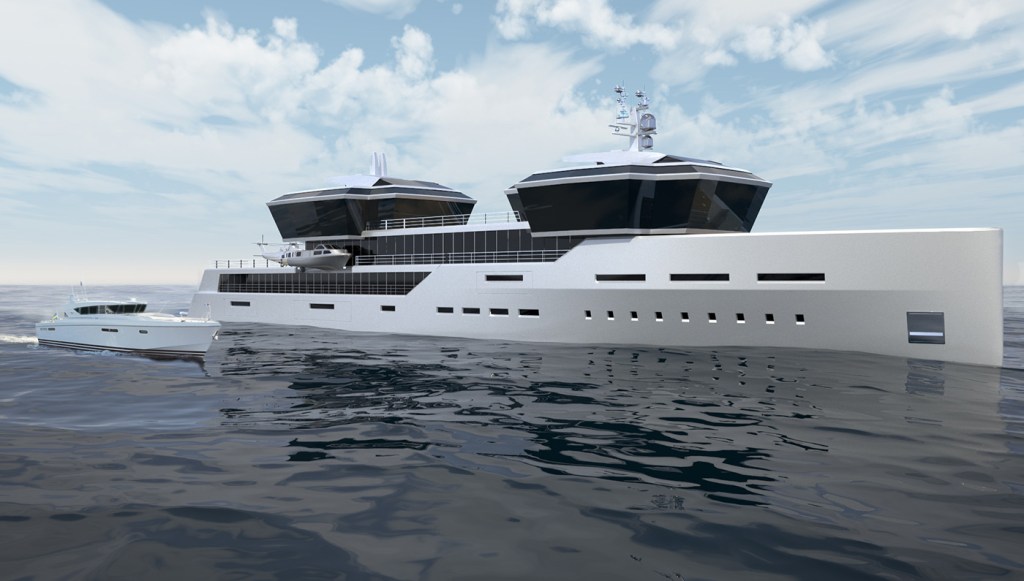 While it might not sound like the most glamorous approach to the rarified realm of building gigayachts, incorporating a proven design from the offshore shipping world could change the way naval architects approach expedition yachts going forward. A client who wanted to explore various corners of the planet actually prompted the creation of the concept. “The unique aspects of this design, other than the styling, are operational,” says Veronika Schmid, a lead designer with Impossible. “In fact, the operational aspects informed the yacht’s design from the beginning.”

The one-of-a-kind profile features two large pod-like structures, with lengthy banks of retractable glass in between. “You can find one-pod examples on many commercial vessels and even a few explorer yachts,” Schmid explains. “But never a twin-pod arrangement.” The aft pod houses the owner’s suite; several decks below; and a skybox on top, which can be used as a large saloon or stateroom. The pod’s towering height provides an exceptional viewpoint when cruising into fjords or watching events taking place on land, such as the Formula 1 races in Monaco.

The forward pod houses the wheelhouse and navigation center, with two wing stations that allow for better visibility and maneuverability in tight situations. The large area can also serve as an office, a bay for a supercar, or a storage area for a wine collection or other items that require air-conditioning.

Between the pods are two blocks of windows surrounding the center cargo deck. The tenders and helicopter have their own climate-controlled garages; however, similar to a freighter, this deck can be configured to carry shipping containers instead, or big toys like motorcycles, a seaplane, a sailboat, or even snowmobiles for polar expeditions. When empty, the deck turns into a protected courtyard for social events, while the lower decks house the six guest suites (for 12 guests), the galley, and quarters for 27 crew. (impossible-productions-ink.com)