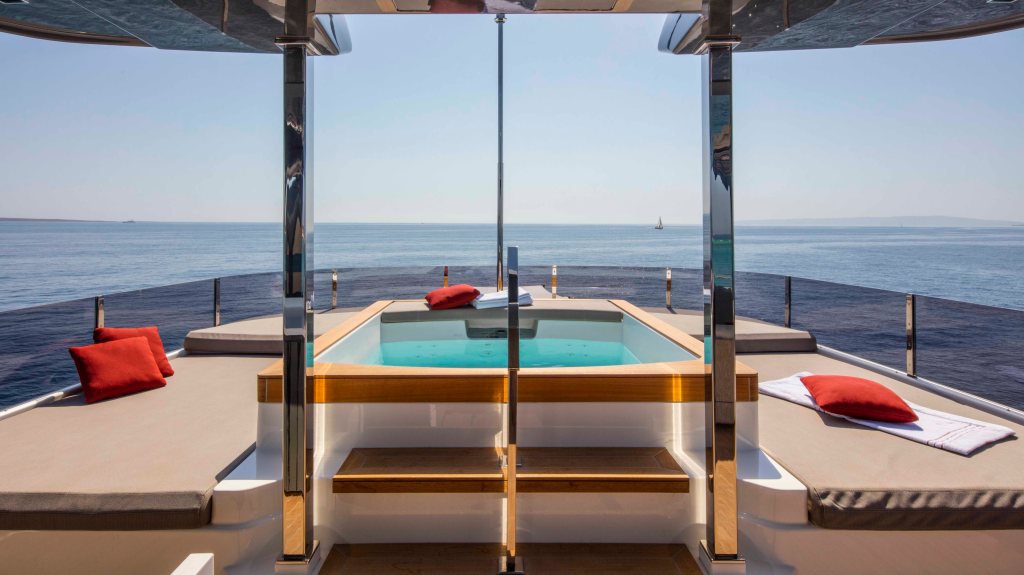 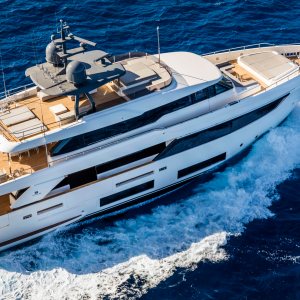 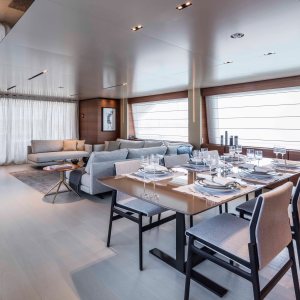 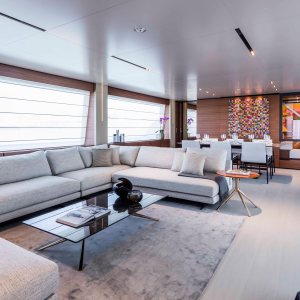 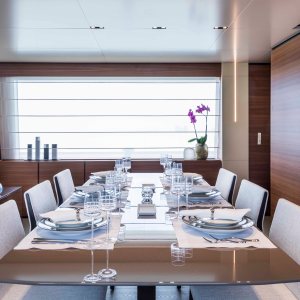 The interior of the Custom Line Navetta 33 was designed by the company’s in-house design team, along with direction from Antonella Ferrari, granddaughter of Enzo Ferrari of the Italian car dynasty. The Navetta 33 was a special launch this fall for the Italian yacht maker and its Ferretti Group parent, basically because it symbolized a new era for its long-revered navetta series. Instead of a traditional navetta—think the Italian version of a down-east trawler but more stylish—Custom Line wanted to inject cosmopolitan and residential elements into the interior, while also being mindful that many people like to spend weeks aboard.

“At the very heart of the project was the desire to combine the yacht’s big interior volumes with livability and sleek, contemporary lines,” Alberto Galassi, CEO of the Ferretti Group, told me after I took a tour of the yacht at the Monaco Yacht Show. “That approach is more typical of yachts with quite different features and performance levels.” In other words, think custom superyacht rather than a series build like the 108-foot Navetta 33.

The contemporary design, however, blurs the line between the two. Galassi said one of the interior design goals was to “remove as many structural obstacles as possible” between the interior and exterior. That involved using large windows with no interior partitions, fewer bulkheads, and clearer lines of sight from one end of the interior to the other. “The ceiling and black-walnut bulkheads follow an orderly pattern of geometric lines that works well with the modern decor,” says Galassi. With Antonella Ferrari’s guiding interior design, Custom Line used custom furniture by Poltrona Frau, Paola Lenti, Zimmer + Rohde, Poliform, Casamance, Elka Design, Dedon, and Mariaflora to help establish the high-end residential feel. The very straight edges and clean look of the bulkheads and parquet floors look more waterfront home than traditional yacht. The designers also made sure to place contemporary paintings in the main lounge and master stateroom, with their own dedicated lighting systems, in positions where they can be viewed from all angles. “We really wanted to create a floating art gallery with this yacht,” says Galassi.

The full-beam master suite is also a differentiator on the new Navetta 33. It makes use of the 25.2-foot beam, two feet wider than the previous model, with extras like a private study with an opening electric window and walk-in closet with black-lacquered walls. The suite has the black-walnut bulkheads along with a pale, clay-colored parquet floor. The Jerusalem marble in the bathroom is subtle but also classy, in sync with the rest of the interior.

The other space that separates the new and old Navetta series is the lounge on the upper deck. “Our goal was to remove all the obstacles between the people onboard and the sea to create a sense of continuity between the interior and exterior,” says Galassi. “We did that with two large side windows that slide open, a rear glass door that completely disappears from view when it’s open, and a teak floor that runs from the deck into the saloon.”

The Ferretti engineers also worked hard to soundproof the interior while minimizing vibration, two critical components that you would never think about on land, but dramatically enhance quality of life onboard. “These active and passive noise-reduction systems are typically found on yachts larger than 130 feet,” says Galassi. “The Comfort Class certification for the Navetta 33 shows we’ve been successful on this front, too.”

The Navetta 33 and its sistership, the Navetta 37, have been remarkable successes for a brand that Ferretti considered dropping from its stable five years ago after it seemed to have lost relevance. The new Navettas have been so successful, in fact, that Custom Line is now the leading Ferretti brand in a company that is experiencing a design renaissance. They show what a builder can do when it combines the right designers with technical prowess.