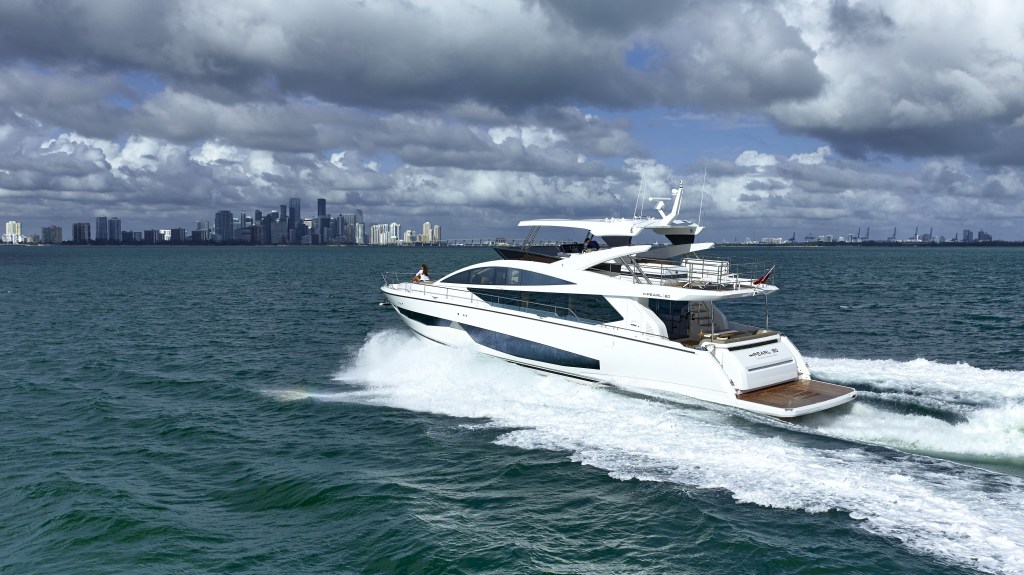 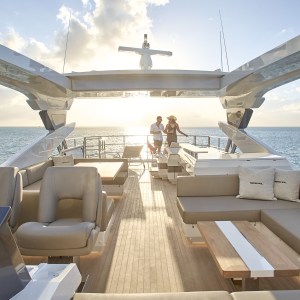 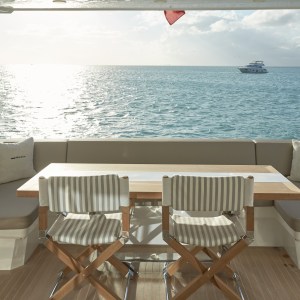 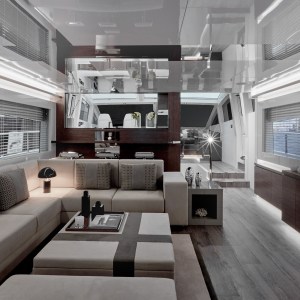 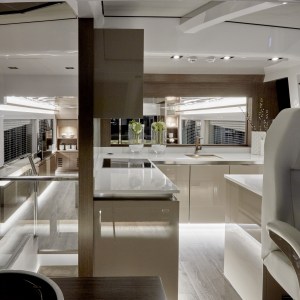 Of the many 70- to 100-foot yachts at the recent Miami Yacht Show, one stood out for creative interior design. The Pearl 80 has a handsome but conventional-looking exterior, with one of the largest flybridges in its class. It’s also probably the fastest 80-footer on the water, powered by a pair of 1,800 hp MAN V12s that give it a 35-knot top end. I had a chance to drive the boat in Miami and it ran like a much smaller sportboat, with tight turns and exceptional handling. It also had standout features like a hot tub on the flybridge, Jet Ski garage, and large social area on the foredeck.

Its most distinguishing trait, however, was the interior. Created by London designer Kelly Hoppen, the 80 feels more like a waterfront pied-à-terre than a traditional yacht interior. Pearl designed the open-plan salon with plenty of large windows, minus the fixed furniture and dining area that typically define yacht salons. Entering from the stern, you feel like it’s a comfy, contemporary designer apartment. The loose lounges and chairs are low-slung and there is no big dining table hogging a third of the space. Instead, the dining area is up a set of stairs beside the helm area, which also has a large, open galley that looks down over the salon. This clever design makes the salon feel like the living room in a high-end residence (the type of environment Hoppen is used to designing), and much larger than an 80-foot yacht.

“Just because you’re on board a yacht doesn’t mean you shouldn’t feel totally at home,” says Hoppen. “My aim was to create a beautiful, relaxing interior with luxurious touches to achieve that holiday feel.” Hoppen created three interior motifs—Studio, Luxury, and Taupe—for Pearl owners to choose from. All employ clean lines, neutral tones, and Hoppen’s trademark colors (cool gray and taupe beige) to give an immediate soothing effect. The Miami yacht’s Studio interior used both light and dark Alpi wood veneers and Antico flooring, a synthetic material that feels and looks like natural wood, but wears much longer.

The lower deck has four staterooms, including a full-beam master suite and large VIP in the bow area. Hoppen added unusual features like windows on the inner walls of the two cabins amidships, so they get natural light from the portholes and from the hallway, and designer touches like coral pieces behind glass in the master stateroom’s bathroom. The interior feels unusually bright without being garish or overwhelming. “Many yacht interiors use orange-tinted woods, so they tend to feel dark,” says Hoppen. “My designs tend to provide extra layers of lightness and texture, along with selective use of materials like stainless steel and leather. I think we’ve really stretched the boundaries of yacht design for a boat this size.”

My favorite area, by far, is the upper helm. The windshield sweeps up over the forward section like a glass ceiling in a conservatory and the large open galley feels like a country kitchen. It connects to the salon through a large panel, but if the owners want a private party, the panel closes with the push of a button. Pearl also designed the doors so that the crew can come and go without crossing paths with the guests. The galley includes generous cabinet space and appliances from Bosch, Miele, and Vitrifrigo to make it a working kitchen rather than a designer showpiece. The six-person dining table is on the other side of the helm area, so privacy rules if the diners don’t want direct connection with the kitchen. But if the chef happens to be the owner, the forward section can be turned into one large social area.

“We’ve always been a bit adventurous, and on this new 80 we decided to do some things the mainstream builders wouldn’t do,” says Bill Dixon, the naval architect who has designed the Pearl line for 20 years. That’s great news for yacht owners who not only appreciate good interior design, but are looking for new ways to use their boats.