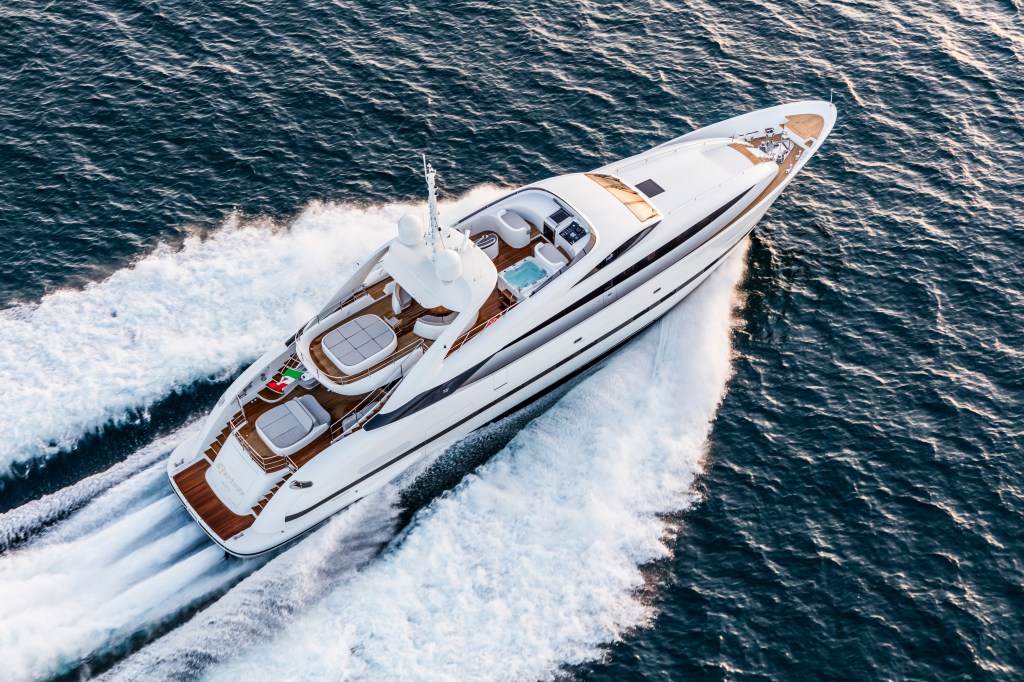 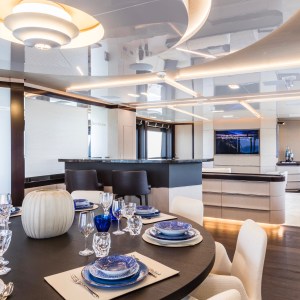 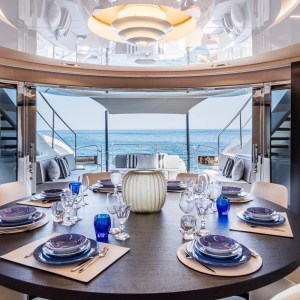 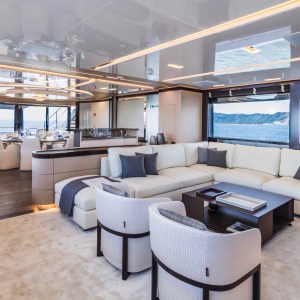 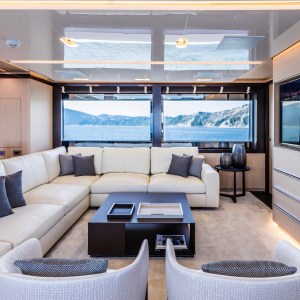 Clorinda, the first yacht from the new owners of ISA, made its European and U.S. debuts just weeks apart at the Monaco and Fort Lauderdale boat shows. The 120 Sport is a hybrid design, using legacy features that ISA had become known for on previous 120s, but with an inspired new interior by Francesco Guida.

The Milan-based designer said he wanted to “exploit the available space in the best possible way.” That can certainly be seen in the split-level master suite in the forward part of the main deck. The windows along the sides flood the bedroom section with natural light. Guida also used the full-beam space to include a desk on one side, a vanity on the other, and lounges on both sides of the bed. It also has an overhead sunroof with an electric shutter for controlling incoming light.

That area is beautiful, but the truly inspired section is the forward bathroom area.

Steps down on both sides surround a wall with two Emperador marble sinks and a large mirror. The sinks are, of course, concealed from the bedroom but the semi-open layout with the open stairs gives the forward section a much less constricted feeling than most bathrooms. But privacy is central to the design. The toilet is in its own private enclosure, while the shower is also a large enclosed stall with Emperador marble floors. It’s not a design that everyone would choose, but it’s a clever solution to the constricted space that many bow areas present designers.

Guida also used a designer’s eye for Clorinda’s main social area by separating the dining space from the saloon with a tall bar and cabinets. The two areas seem private, but the line of sight from the cockpit to the saloon television remains unbroken, so the interior feels big. The light Alpilignum Lissoni white oak finish creates an overall sense of brightness. Furniture inserts are “Mastrotto testa di Moro” leather, while the leather sofa in the saloon is by Poltrona Frau. The same Emperador dark marble in the heads and shower was used on the bar-top and other surfaces in the saloon. The bar has a dumbwaiter built into the wall behind it for easy food delivery from the galley on the deck below, while a frosted glass door in the saloon lets Clorinda’s staff come and go from the galley without disturbing the owners and guests.

The owner wanted a connected boat, so the yard contracted Videoworks to set up the onboard systems. An expert in yacht installations, the Italian electronics firm linked the boat’s Kaleidescape Movie Store, music library, lighting, and many other functions to an iPad in each room. Guests can do just about anything with the iPad: choose movies, open curtains, adjust air conditioning, order a cocktail via the staff “call” button, and even turn on the electronic do-not-disturb sign for each stateroom. It’s a smart boat that benefits from a smart use of space.