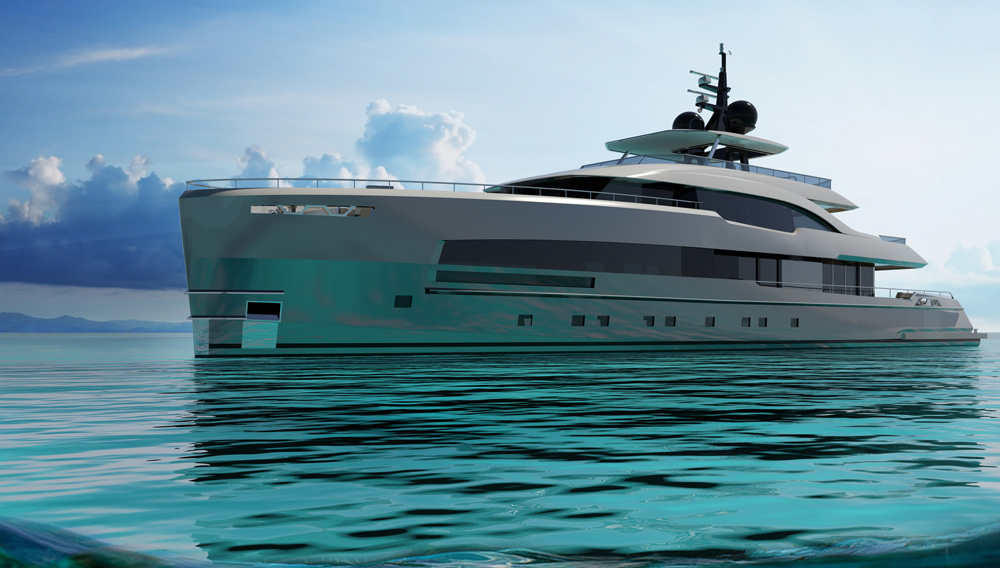 The Brazilian mythological figure Yara has been compared to the Greek Sirens for using her exceptional beauty and voice to lure sailors. But this Brazilian beauty had a different agenda than her Greek counterparts: Rather than enticing men to crash their boats against the rocks and drown, Yara invited her suitors to join her in an enchanted life beneath the sea.

The ISA Yara 48 may only reach slightly below the ocean’s surface, with a draft of less than 7 feet, but life aboard promises to be just as enchanting as life under the sea. The 157-foot concept from the highly respected Italian builder ISA Yachts follows the announcement of the all-aluminum Yara series last fall. ISA revealed details of a 144-foot version of Yara at that time, then released information about the 157-foot version in mid-April.

The Yara 48 (named for its length in meters) shares many design features with the 44, including a fast-displacement hull from Van Oossanen Naval Architects that delivers improved fuel efficiency at slower speeds for transatlantic crossings. At 12 knots, the boat has a range of about 4,800 miles. But when there is a need for speed, the yacht can jump up to 30 knots. Beyond the exceptional top speed and transatlantic range, the Yara 48 has another best-in-class feature: the 7-foot draft, which lets her roam freely in shallow cruising grounds like the Florida Keys or the Bahamas.

ISA tasked Omega Architects with creating an open main deck that provides 50 percent more usable space than a traditional enclosed design. The result is a one-of-a-kind layout that connects the saloon and aft deck lounge. The saloon, surrounded by opening floor-to-ceiling windows, can either remain enclosed or become part of a large outdoor space. Omega employed as many openings and as much natural light as possible, with about two-thirds of Yara’s windows being full height. Even the bulwarks along the side passages are as low as possible, providing unimpeded views of the water for guests sitting at the dining table.

The sundeck was also designed to offer 360-degree views, both by using glass bulwarks instead of traditional railings and situating the hot tub beneath a specially designed mast that rests on pylons. The full-beam owner’s suite, with its full-height windows, is also the ultimate room with a view. Even closer to the water, the three-room beach club at the transom is modeled on a Russian banya, with a sauna, bar, and day head. (isayachts.com)