There’s a reason that many of the world’s most sought-after watches are made in Switzerland, that Paris is the center of haute couture and that Japan is top-of-mind for lacquer-ware: The craftsmanship that rests at the heart of each of these disciplines enjoys a long history in its respective region.

The same is true in Italy, where shipyards rely on the work of nearby furniture makers, tanneries and other artisans to ensure their cabins stand out. It’s a tradition that has long differentiated Italian yachts from their global competitors. “The reason why the Chinese and the Japanese [ship]yards—and they have great yards— have never managed to break into the [yacht] market is because of the industrial ecosystem that you find mostly in the north of Italy,” says Barbara Muckermann, chief marketing officer of luxury cruise line Silversea, which is based in Monaco. “It’s absolutely incredible, the kind of workmanship there. Nobody can really replicate it yet.”

But while we’ve all heard of the Benettis and the Rivas of the world, many of the Italian artisans who make bespoke furniture and objects for these yachts are relative unknowns. Here, a look at four such producers. They may toil behind the scenes, but their work is nothing if not scene-stealing.

The interiors firm Yachtline 1618 has two production sites on the outskirts of Pisa, both of which you are welcome to visit via helicopter. “Our factories are equipped with helipads where our clients can land,” says owner and CEO Fiorenzo Bandecchi. And there’s good reason to make the trip: Yachtline creates a 1:1 replica of each boat’s interior at its facilities before shipping, so both yacht owner and shipyard know exactly what the final product will look like before everything is formally installed. “They revolutionized the production method by reserving more than 16,000 square meters [173,000 square feet] of their facilities for mock-ups,” says Vincenzo Poerio, CEO of Tankoa Yachts, who has collaborated with Yachtline on about 50 projects in the course of his career. “In this way, the customer can check every single detail of the interior of his yacht.” 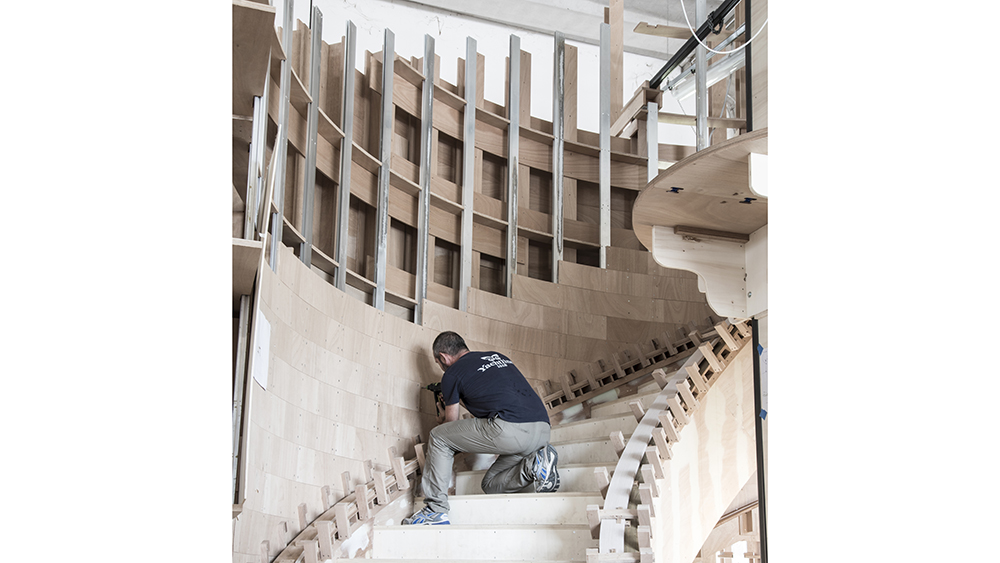 A Yachtline 1618 craftsman works on a commissioned staircase.  Giuliano Sargentini

Yachtline is used to unusual requests: For one project with shipbuilder Perini Navi, the owner wanted a unique look, so he required that the interiors feature titanium, a metal commonly used for reinforcement in military vessels. Bandecchi and his team incorporated the strong material into finishes and furniture, from the ceilings and cabin doors to one of the dining tables. The final product, the nearly 230-foot Badis, is the largest sailing yacht ever made in Italy. Its unique oak, leather and titanium design earned it the Best Interior award at the Monaco Yacht Show. A significant accolade, but one that hasn’t gone to management’s head: For Bandecchi, Yachtline’s work remains as straightforward a process as ever. “The client comes with a design, and it’s our duty to make that into a reality,” he says simply.

There’s careful record keeping, and then there’s Rubelli’s textile archive. The company, which has been in the fabric business for over a century, maintains a collection of more than 7,000 historic samples, some dating to the late 15th century. Housed in Venice, this trove often serves as inspiration for new creations. “We always start from something that machines can’t craft,” says Nicolò Favaretto Rubelli, the co-CEO. “Maybe an antique fabric, maybe an artwork. It needs to have this artisanal, handcrafted effect.” From there, technology takes over. Fabrics are made at Rubelli’s mill in Cucciago with electronic jacquard looms, which help speed up the process. But if you’d prefer things done the old-fashioned way, that can be arranged: The company possesses four restored handlooms from the late 18th century. 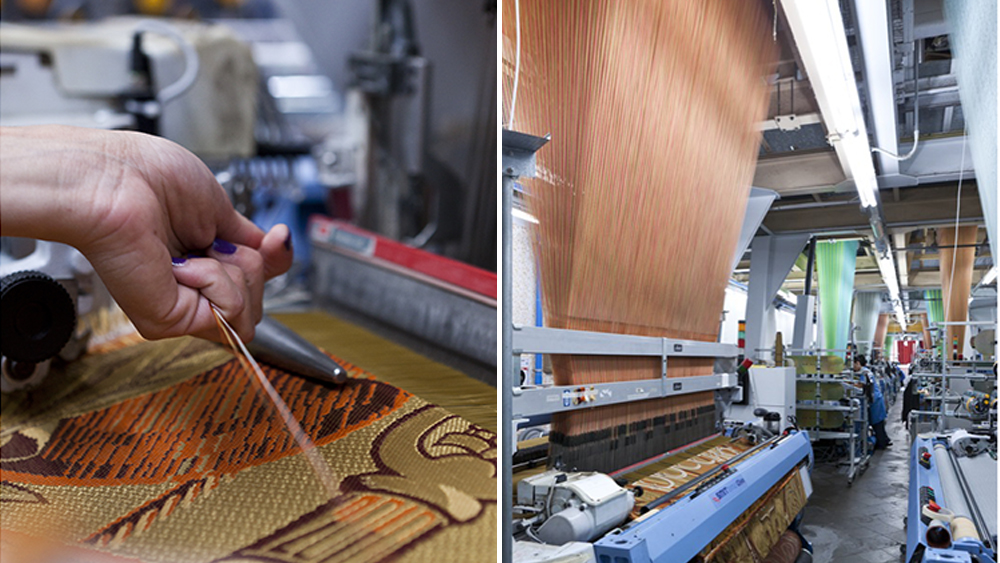 Looms at the Rubelli mill near Lake Como.  Courtesy of Rubelli

Rubelli has worked with a long list of shipbuilders over the years, including Rossinavi, CRN and Overmarine, a résumé that has led to quite the following. “It is no coincidence that this brand is known abroad, because it is distributed in the most exclusive showrooms in European countries and beyond,” says Sergio Buttiglieri, style director at Sanlorenzo Yachts. “The great care it takes in processing its yarns makes Rubelli truly unique.”

The firm is versatile in terms of what it can design, though in the yacht sector it’s best known for high-performance fabrics. Both beautiful and practical, these textiles, which are popular in blue to match the surrounding waters, can sometimes be used indoors and out. Rubelli also has its own furniture line, a catalog that includes chairs, tables, sofas and lighting. Or you can go completely bespoke, just as you would for your living room at home—which, as it happens, Rubelli can also design for you. “A yacht is considered a villa floating on the sea,” says Marco Attisani, director of Studio Rubelli, the company’s interior-design division. “There is no substantial difference between the two.”

You could say Giovanni Giuntoli has a genetic predisposition to working with rawhides. “My father says my first three words were ‘Mom,’ ‘Dad’ and ‘leather,’ ” he says. It was, after all, the family business. “I lived all of my life in a tannery. When I was a child, I would do my homework in my father’s office, and when I was a teenager, I started doing summer work for our company.” In the end, though, he chose to strike out on his own. The family tannery’s main clients were fashion brands, which demanded high volumes and quick turnover, a system that Giuntoli felt was not suited to the quality and durability that distinguish true luxury. He didn’t want to take the easy route. “I said, ‘Okay, what is the most difficult market right now?’” he recalls. “And it was yachting. It’s like the F1 for cars—everything has to be perfect.” 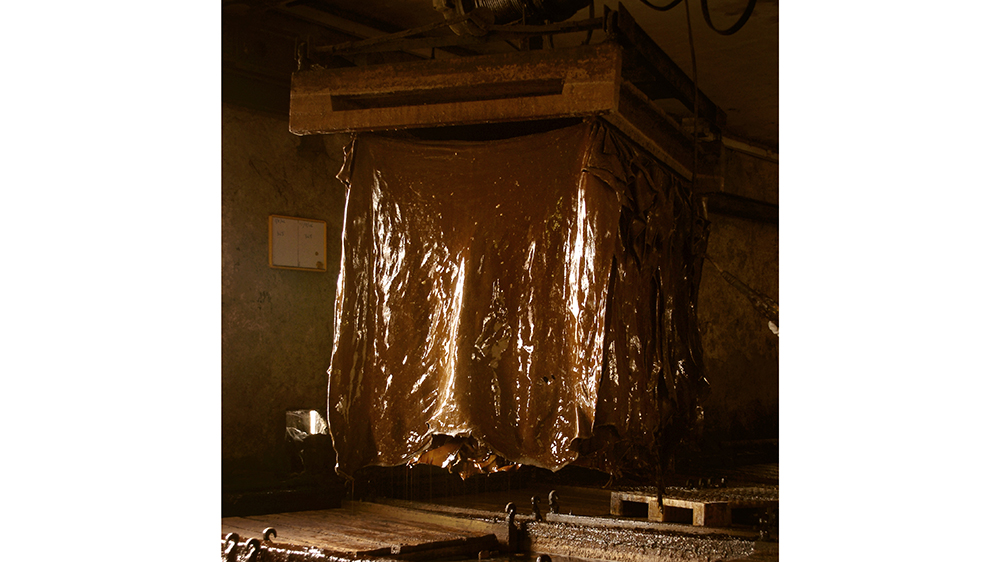 RoyaLeather animal skins are immersed in a bath of vegetable extracts.  Courtesy of RoyaLeather

In 2009, he set up RoyaLeather in Santa Croce sull’Arno, a Tuscan city considered one of the leather capitals of the world. Since then, the company has worked on wall coverings, flooring and furniture for a wide range of yacht clients.

One standout commission was for the interior walls of Cbi Navi’s Stella di Mare. RoyaLeather developed a custom-colored brown leather that was extremely durable—essential because the owner, a parent of a seven-year-old, wanted a yacht that would be conducive to family life. “What sets them apart is the beauty of their materials, their professionalism and the responsibility with which they approach a project,” says Umberto Fossati, the interior designer who worked with RoyaLeather on Stella di Mare. “I’ve submitted special requests for some of my other projects to them, and to date my expectations have never been disappointed.” 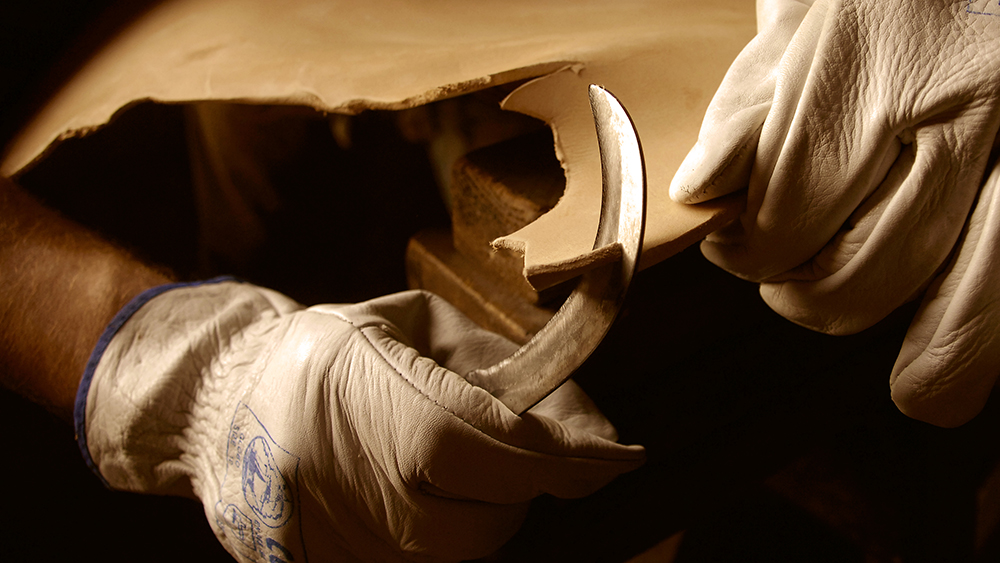 A tanned piece is trimmed by hand.  Courtesy of RoyaLeather

Giuntoli takes commissions in other industries as well, including aviation, automotive and, to a lesser degree than the old family business, fashion. No matter the sector, sustainable sourcing is top-of-mind. The company’s hides are by-products of the food industry, so no animals are slaughtered for the sake of leather alone. “We consider ourselves part of the chain,” he says, “recovering a precious material and giving it new life.” 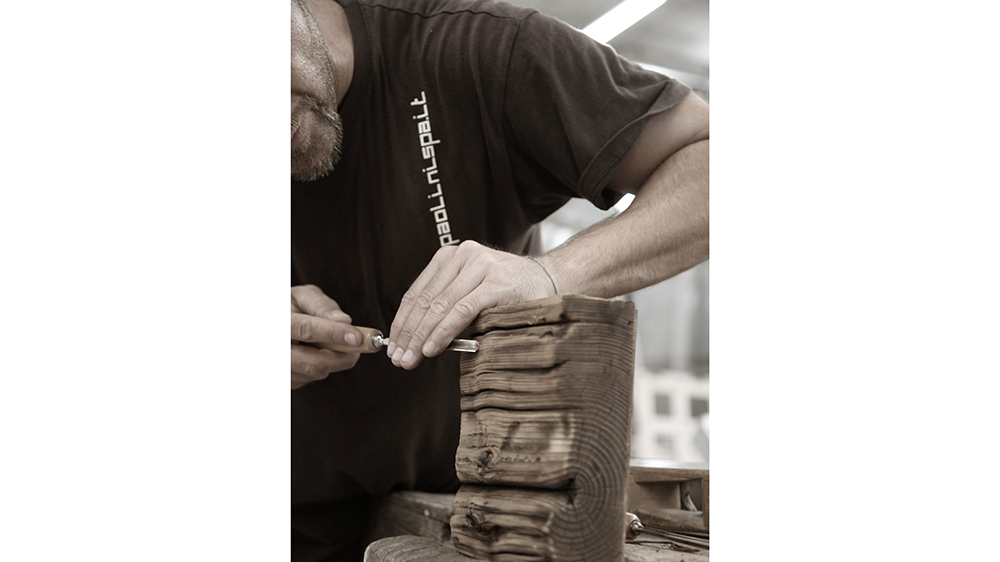 You can ask Paolini for pretty much anything, even if the materials don’t yet exist. Part artisan cohort, part science lab, the company specializes in combining its high-end woodworking with metalwork to create one-of-a-kind finishes and furniture. Its research division, which oversees this experimentation, is called gabbia di matti, or “madhouse,” a playful moniker that alludes to the consistently off-the-wall, boundary-breaking components created there. “We produce new materials every day, new finishes every day,” says founder Giorgio Paolini. “Some need three, four years to develop. Others, in the morning we have an idea, and in the evening, we have the result.” The studio has invented over 2,000 materials to date. Examples include a hand-carved yellow pine cast in silver and specially oxidized so that the deepest cuts are black in color—used on a 150-foot vessel from Wider yachts—as well as unique finishes in brass (for the main salon) and zinc (the central stairwell and elevator) for CRN’s Voice. “Paolini did several yachts for me, all of them unique, modern and innovative,” says Giuseppina Arena, a designer and architect who collaborated with the firm on commissions from Pershing Yachts. “They’re very flexible and can create special products that perfectly match the styles of the interiors.” 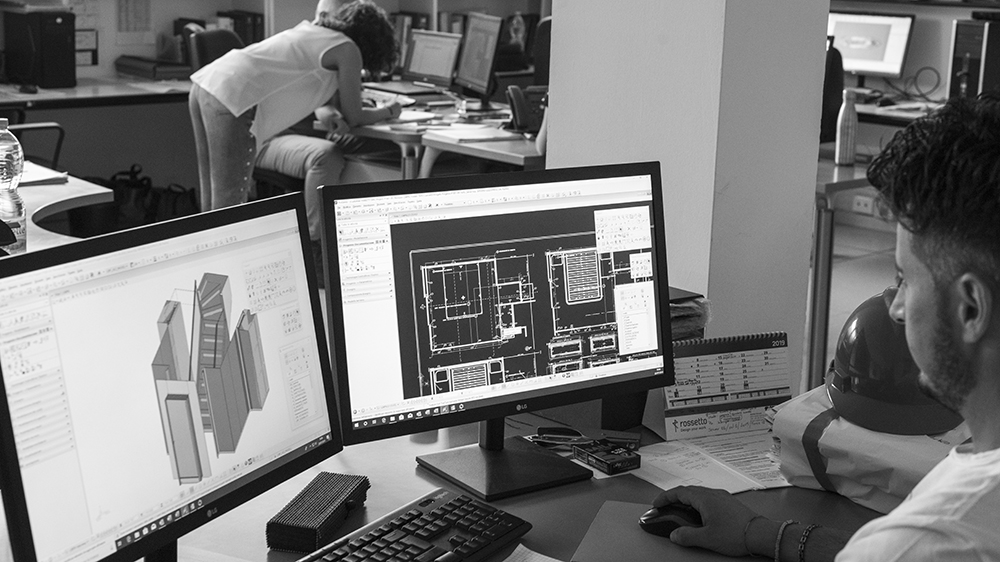 Paolini’s work is part of a long tradition. Its two production sites are located outside of the small town of Narni in the Umbria region, an area with a metalworking history dating back thousands of years to the ancient Etruscan goldsmiths. Founded in 1980, Paolini and its work look quite modern in comparison to that of its forebears. One of its more contemporary, forward- thinking projects is esi, an anti-microbial material that Paolini developed and that was certified by the University of Modena and Reggio Emilia. Esi, which can be applied to thin sheets of aluminum and placed under furniture and carpets, emits silver ions into the air, serving to constantly disinfect the environment, according to Paolini and the university’s virology laboratory. It has been proven to be 99 percent effective against viruses with structures similar to that of Covid-19. So far, the company has worked esi into a Ferretti yacht, and it recently developed a way to integrate it into furniture and objects more seamlessly. “We have old artisan techniques and new technologies,” Paolini says. “It’s necessary to develop both. It pulls them both forward.”