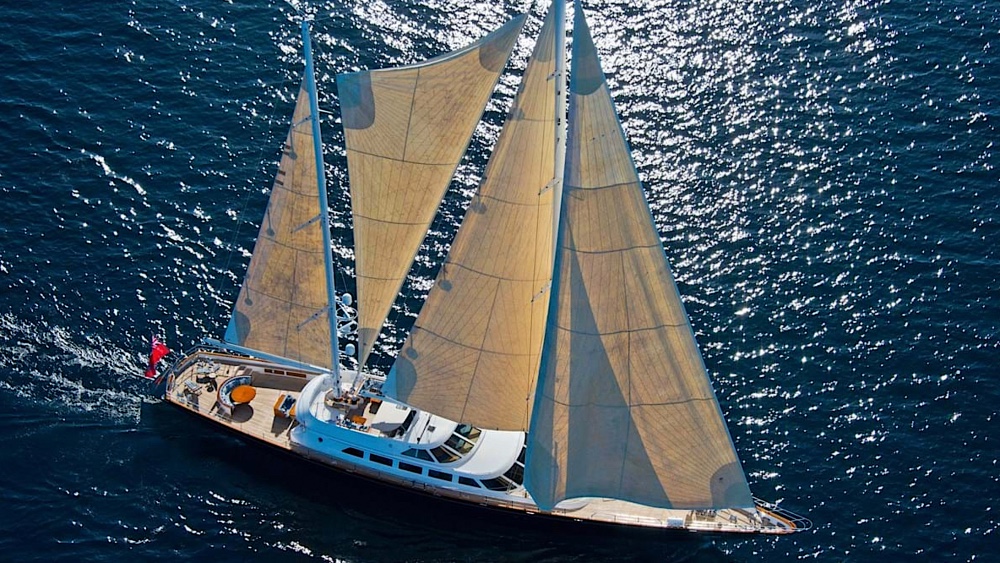 The 83-year-old, nicknamed Il Cavaliere, or The Knight, bought the Italian-built Perini Navi ketch in 1999 from media mogul Rupert Murdoch, who first commissioned this navy-hulled beauty in 1985.

Murdoch reportedly married his third wife, Wendy Deng, onboard the yacht in a ceremony in New York Harbor in 1999.

Berlusconi, who according to Forbes magazine was the world’s 190th richest person in 2018 with a net worth of $8 billion, reportedly paid Murdoch roughly $7.2 million for the yacht in 1999.

The Perini Navi is a classic design that has crossed the Atlantic many times during Berlusconi’s 21 years of ownership.  Burgess

Since then, many millions of dollars have been lavished on refitting Morning Glory. The updates include installing new 850-hp MAN diesels and new generators in 2010, as well as a comprehensive rebuild in 2016-17, which saw the original white hull repainted dark blue, the flybridge extended, and the entire rigging refitted.

Viareggio-based Perini Navi is world-renowned for creating yachts that combine beauty, elegance and performance. According to yacht broker Burgess, which holds the coveted listing, Morning Glory has a top speed under power of over 14.5 knots and a transoceanic range of 4,900 nautical miles at 10 knots.

During Berlusconi’s ownership, the yacht has been a regular visitor to the Caribbean, especially Antigua, where the controversial politician and businessman has a vacation home. Summers have usually been spent cruising the French and Italian Rivieras.

With luxury accommodations for up to eight guests in four suites—as one witty commentator said, “be they blonde, brunette or redhead”—Morning Glory comes with unique features, such as a working marble fireplace, formal dining area and spiral staircase.

The full-beam owner’s suite on the lower deck aft comes with a master study, along with separate his and hers bathrooms. The owner and guests are pampered by a crew of eight.

According to the Burgess listing, the yacht is driven by 10,645-square feet of sail area, giving her exciting double-digit sailing performance. With a huge drop-down centerboard, Morning Glory has a maximum draft of 25 feet for stability and speed.

As for octogenarian Berlusconi, he hit the headlines last month for his split from his former partner of 12 years, 34-year old Francesca Pascale. According to the Guardian, he is reportedly now dating 30-year-old Marta Fascina, an MP from his political party.