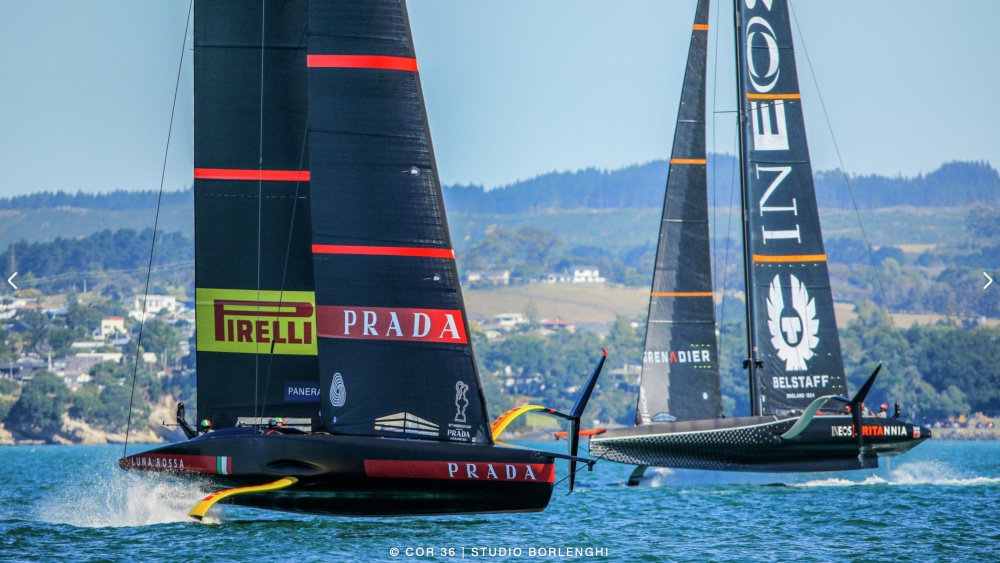 Luna Rossa Prada Pirelli beat the Ineos Team UK yesterday in the eighth and final race of the Prada Cup in New Zealand’s Hauraki Gulf. Just as they did 20 years ago, the Italians will now go on to challenge the Defender, Emirates Team New Zealand, for the America’s Cup.

Luna Rossa’s victory on Sunday gave them a total of seven wins and one loss against the British team. Analysts said the Italians’ boat was faster in the medium to light conditions in both races yesterday.

The AC75 monohulls that both teams used—which have been substantially tweaked under the America’s Cup rules—are considered the fastest, most extreme vessels since the America’s Cup started in 1851. Some analysts consider the design and technology so far beyond sailing that it should be called another sport. The US team, American Magic, saw its boat hit a record 52.2 knots (60.07 mph) during its run in the semifinals, though the team was eliminated earlier this month by Luna Rossa. The world speed record by a sailing trimaran was set at 54.10 knots (62.25 mph), so the Americans were very close.

Team Luna Rossa’s boat was designed for sailing faster in light to medium air conditions, so it prevailed against the UK competitors.  Courtesy America's Cup

Because of their radical designs, the AC boats are capable of doing 40 knots (46.03 mph) in just 17 knots of wind. That kind of performance was unheard of just three years ago. For the sailors on board the boat, that’s like sticking your head out of the window while driving at 50 mph. It’s also equivalent to a Force 10 storm gale.

This is the second time that Luna Rossa will be the challengers in the 170-year-old America’s Cup. The UK team extends a 170-year-old losing streak for Great Britain. British sailing sloops first competed in the first America’s Cup against the 101-foot schooner America in 1851, which won the race handily and collected £100. Queen Victoria, watching the race, asked who was second, and the reply came: “Your Majesty, there is no second.”

Despite subsequent attempts by Britain since then, no team from the UK has ever won it. This year’s four-year campaign by Ineos, however, came closest.

“My initial thoughts are congratulations to Luna Rossa,” said Ineos Skipper Ben Ainslie after the event. “They sailed brilliantly, and they had the best package over the range of conditions and they deserved to win. We fought tooth and nail and we went down fighting, even in that last race so I couldn’t be prouder of the team.”

Twelve days from now, Cup Defender Emirates Team New Zealand will face Luna Rossa Prada Pirelli on the Hauraki Gulf to decide who will win the oldest trophy in international sport. The event will start March 6 and run through March 15. The first team to win seven matches in the 13-match series will win the America’s Cup.