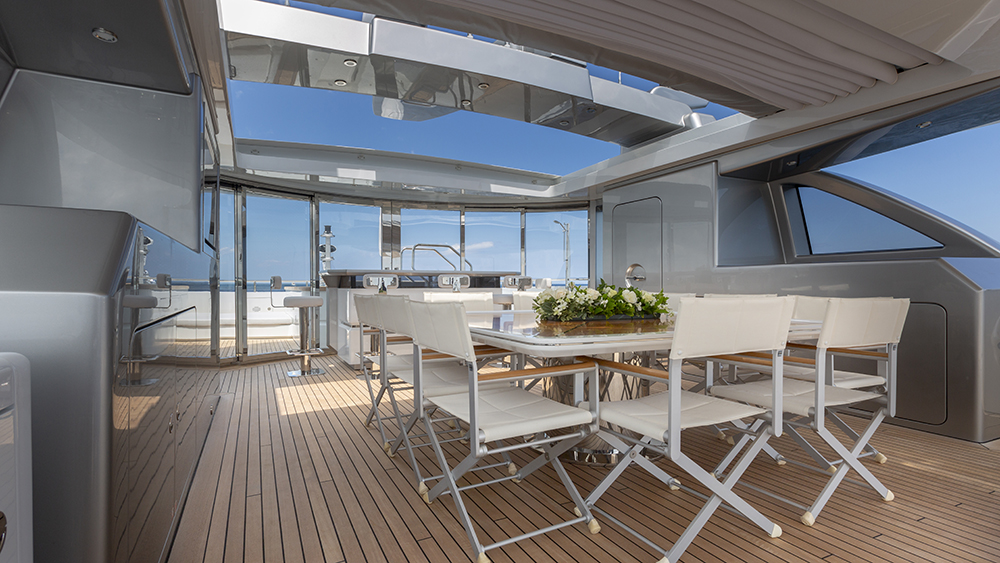 It’s rare to step into the inner sanctum of an owner’s custom superyacht after only seeing the pictures, but the experience becomes more exceptional when you’re shown around by its designer and captain. Robb Report recently had the chance to tour Elaldrea+, the 161-foot bespoke Benetti yacht launched last year from the Benetti yard in Livorno, Italy, which is now based in South Florida. Designed for a multi-generational family, Elaldrea+ is the second Benetti of the same name, but a significant departure from the first Elaldrea.

Launched in 2002, the owner’s first Benetti Elaldrea yacht was a 115-footer with a more conventional profile and a smaller interior volume than the plus version. Both Elaldreas got their names by combining a few letters from the names of the owner’s wife and two daughters, demonstrating the family’s tight bonds. Elaldrea+, however, has dedicated areas for the family’s third generation.

“The owner said there needed to be dedicated areas for all three generations,” says Horacio Bozzo, the designer responsible for the yacht’s handsome exterior. “He told me to make an area for the kids. We all love our kids and will spend plenty of time together, he said, but we also need some privacy.”

Bozzo configured the sixth stateroom, behind the helm area and captain’s quarters, with bright colors, low-slung furniture and a television with a PlayStation for the youngest generation, while also designing a shallow swimming pool in front of the wheelhouse so the young kids would be safe and always in view.

By contrast, the spacious beach club became the designated area of the second generation, who could either hang out in the air-conditioned space (with a two-person sauna) or open up the massive aft doors to enjoy the 250-square-foot terrace on the water.

The third area, for the grandparents, includes a shaded space on the 1,200-square-foot flybridge deck, with a bar and an eight-person table for alfresco dining (a dumbwaiter connects three levels so portable feasts are common on the yacht), with a customized Jacuzzi on the bow deck.

“The yacht is used a lot,” says Captain Mark Galloway, who has been captain on both Elaldreas. “The family is here most weekends, and we do many local cruises. The exterior spaces like the bridge deck and sundeck offer more shade, so they’re being used much more than the open exterior spaces on the last yacht.”

One of designer Bozzo’s goals was to maximize the exterior spaces without compromising on the interior volume of Elaldrea+. “The yacht came in at just under 499 gross tonnes, per class standards, so we had to be creative with the exterior because no owner wants to compromise,” he says. “We were able to use the space intelligently on this design.”

Elaldrea+ is the second Benetti built on its 700 hull platform, but it is a very different style from the 148-foot Domani, the first 700-series hull. “We changed Elaldrea’s stern completely while increasing the size of the aft platform,” notes Bozzo.

The decor by Benetti Interior Design combined custom styling by Italian designers Poltrona Frau, Giorgetti and Arketipo with Casa Armani fabrics and, in the main dining area, floors of Afyon marble with Sahara noir marble trim. The main saloon is defined by floor-to-ceiling windows while the galley area has two wine cellars that allow service straight to the formal dining area.

The master suite forward is palatial—measuring 1,200 square feet—with two dressing rooms, two separate en-suite bathrooms that share a spacious centerline shower and a balcony that folds out over the water. The open balcony increases the sense of space exponentially.

Galloway is proud of his Team Italia–designed helm, featuring a seamless look with the embedded electronics screens. It also has an exceptional view of the water. The outer areas on both sides have two wing stations for easy docking of the yacht, offering a clear line of sight.

“On the older yacht, we didn’t have these wing stations, so we docked with walkie talkies and a crew member on the dock while I was at the wheel,” says Galloway. Now, instead of not being able to see the dock, Galloway can ease the yacht into a slip space with a joystick controlling the thrusters. The superyacht world, he says, has gone super-high-tech in the last decade.

Bozzo also had an active role beyond the big-picture exterior spaces. He designed the furniture on the aft bridge deck and made sure to include glass windbreaks on the upper social area so that crowds of 30 or 40 could gather in windy conditions and still enjoy being outdoors. He also configured the details with a practical eye, using glass side railings rather than metal so everyone can see the water below. He also designed small ledges on the exterior windows so the crew could wash them without putting themselves in danger. “Design and function need to go together,” says Bozzo. “It involved a little more work for us, but the result is that the crew is happy. Small details like this really make the difference.”

The crew areas are separated into three areas: the captain’s quarters behind the helm, a bedroom for two engineers abaft the engine room and a main crew area below with three double cabins and private bathrooms. Again, the quarters are larger than a typical superyacht to make life on board happier.

Elaldrea+ has a range of 4,000 miles at 10 knots, with a top end of about 16 knots. “At 14 knots, she consumes only about 45 gallons per hour, which is very economical,” notes Galloway. “Her draft is also only eight feet so we can get over to the Bahamas easily on the weekends. We plan to keep her in the Caribbean for the winter.”