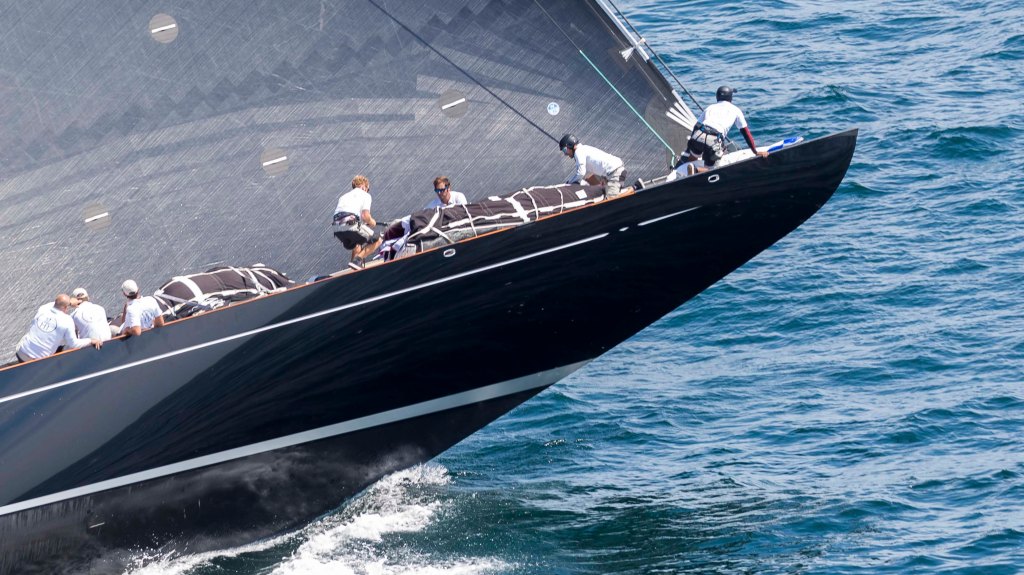 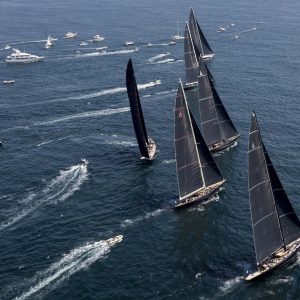 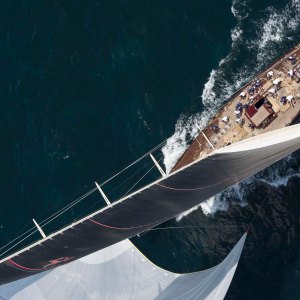 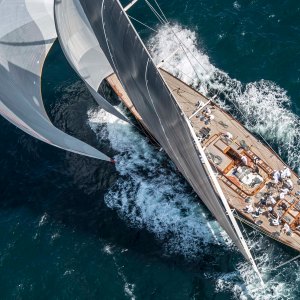 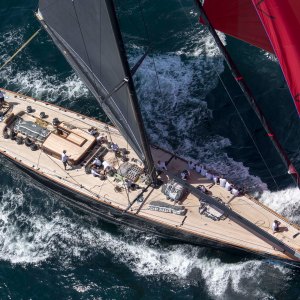 With their majestic sails billowed, six powerful J-Class sailing yachts glide past the manicured lawns of the New York Yacht Club summer clubhouse in Newport, RI. Jockeying for position, the long, elegant yachts are soon in full-blown racing mode, crews of 25 scrambling aboard 140-foot-long decks as they trim the monster mainsails or giant spinnakers in synch with the helmsman turning the wheel, often racing just feet from their competitors.

Names like Ranger, Lionheart, Velsheda, and Topaz harken back to the golden age of sailing, when financial magnates like Harold Vanderbilt and industrialists like Sir Thomas Sopwith skippered their own resplendent J-Class yachts through the 1930s in what was arguably the heyday of America’s Cup racing. When World War II started, the golden age of sailing died.

History repeated itself last week as Lionheart, a direct descendant of Ranger, the 1937 America’s Cup winner, won the first-ever J Class World Championship with the same kind of nautical beauty and sailing finesse that Ranger displayed some 80 years earlier.

The latest generation of J-Class yachts are either relatively close replicas, or in one or two cases, the steel hulls of the original J-Class designs. The class is unique to the sailing world partly because it’s an exclusive club, with only nine active J-Class yachts and only six racers, but also because the yachts are built to J-Class guidelines from the 1930s. The sailing superyachts have the same beautiful lines and sail plans as their great-grandfathers, but these days they have modern sails and electronics, different ballast ratios, and space-age build materials.

The Newport location proved exciting because it was one of the first times where all six J-Class designs were racing each other. Crowds came to watch by the thousands, and by the end of the seven-race regatta, hundreds of spectator boats floated on the edges of the racecourse to get a bird’s-eye view. With crowds on the shore cheering the boats on, Newport felt like Newport of the 1930s again.

There is a well-deserved mystique about these boats, which are also used by their owners for cruising the world, that comes alive when they’re racing. “They’re wonderful and majestic boats,” notes Brad Read, executive director of the local nonprofit Sail Newport, who crewed on Hanuman. The U.S.-flagged yacht was skippered by Read’s brother, Ken. “They have acres of sails and deliver an indescribably powerful feeling when they’re under way. You learn a lot about sailing superyachts quickly as you get plugged into the team.”

The races began last Tuesday, with the boats sailing a 20-mile navigator’s course around Narragansett Bay, past Newport harbor. Having so many graceful-looking yachts sailing together at a stately 10 knots is a picture-postcard image for anyone on shore, but the crews were working hard for the first win. “The racing is close and very competitive,” says Justin Clougher, who works the mainsails on Velsheda.  “Everyone is working their tails off to give the yacht her best performance. The wins are often measured in inches.”

Hanuman prevailed in the first race, beating the most recently built J-Class yacht, Svea. “That was one of the very coolest sailboat races I have ever been in my entire life,” gushed Read afterward. “It had everything: home town; gybing and tacking around all the little nooks and crannies; a great crowd of boats out there watching.”

As the week went on, with Hanuman placing fifth and sixth in later races, the tide turned in favor of Lionheart. Some of the races were nail-bitingly close. Ranger beat Lionheart in the sixth day’s race by only a second, after waiting five and a half hours for wind on Narragansett Bay. In the same race, Svea claimed third place over Veleda also by a second.

Read came to appreciate the finesse needed to race one of these huge boats, and the discipline of the crews, largely comprised of professional racing sailors. “I was impressed with the overall choreography of the teams,” he says. “Everyone makes it look easy, but it’s not. The tactics are the same as smaller racing boats, but the skipper has to make decisions minutes earlier than a smaller boat that impact everyone. On a 50-foot raceboat, you might have one or two people trimming sails. In the same positions on this boat, there are often four or five crew.”

Clougher says that while Velsheda has the latest electronics and communication devices, the yacht’s sail winches are both hydraulic and manual. The manual winches require bursts of physical intensity, along with coordinated teamwork, to trim or change sails. The newer yachts have hydraulic winches to power sail changes. Velsheda, built for Woolworth’s owner W.L. Stephenson, was launched in 1933. It raced the greatest names in classic yachting—Britannia, Endeavour, and Shamrock—winning more than 40 races in its 1935 season.

Sixty years later, the yacht was discovered as a bare steel hull in a boatyard. A thorough two-year rebuild brought it back to immaculate shape and new technology, where it was allowed under the J-Class rules, made Velsheda a racer again. In 2006, it was fitted with the tallest one-piece carbon mast in the world, and sported a beautiful new interior. “It’s like a temple down below,” says Clougher. “There is a full mahogany interior along with things like a marble bathtub.”

Ranger, by contrast, is a replica built to the original lines of the boat owned by Harold Vanderbilt, the 1937 America’s Cup Winner. The reincarnation of Ranger was launched in 2003, and two successive refits made the yacht lighter and faster. Its carbon boom and rigging is 50 percent lighter than the previous rigging. Like the original Ranger, this one has beautiful teak decks and a stunning interior, with staterooms for 10 guests and eight crew.*

World Champion Lionheart is also based on a yacht design commissioned by Vanderbilt, similar to his original Ranger. Launched in 2010, Lionheart began racing two years later. The yacht has won many races over the last five years, including this year’s America’s Cup J Class Regatta in Bermuda. Like the other yachts at Newport, Lionheart is a stately cruising yacht that races, well, with the heart of a lion. The shiny, black-hulled J-Class displayed unwavering consistency across the race week in Newport, besting Hanuman, which won three races, by three points.

Lionheart’s owner had quipped five years ago: “I want to race and I don’t want to make a fool of myself.”  He certainly didn’t look foolish as he accepted the first World Champion prize at the ceremony at the New York Yacht Club’s Harbor Court.

For Newport, the World Championship also gave the world’s sailing capital a chance to shine again. “This was a chance for sailing to come back front and center in the world and for these majestic yachts to put on a show,” said Ken Read after the event. “I can’t wait to do it again.”