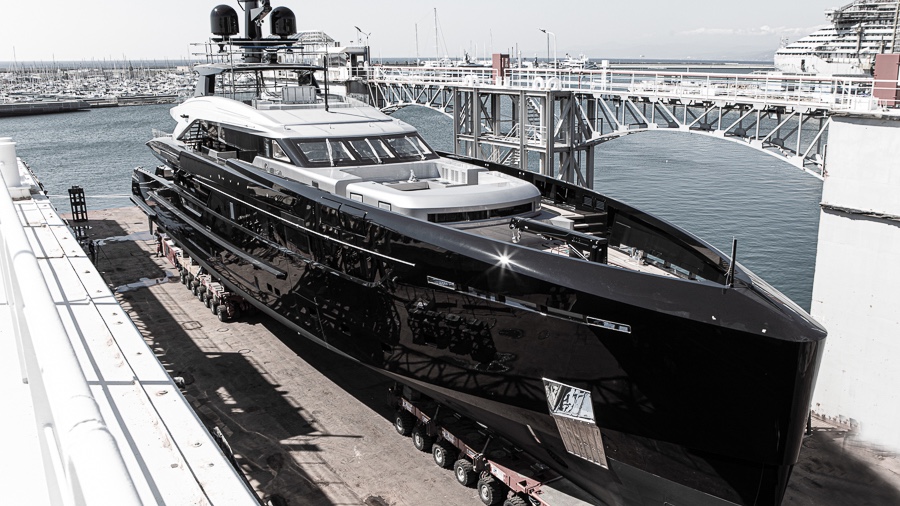 Darth Vader would be proud of the gleaming new black 164-foot Olokun, launched Saturday from the Tankoa shipyard in Genoa. The yacht is the third in the Italian builder’s 50-meter displacement series, with a top speed of 17.5 knots and cruising speed of 14 knots. The exterior by Francesco Paszkowski includes a stylish outdoors focus, with plenty of terraces and decks, and the exclusive interior by Casadio Miami/London, a US-based studio, fits the modernist theme.

While the yard says that this third yacht in the series has been “fine-tuned” following its two siblings, its true differentiator—and that of about any other yacht on the water—is the shiny, jet-black hull and silver superstructure mandated by the owner.

“The black paint is unique and very elegant,” Vincenzo Poerio, Tankoa CEO, told Robb Report. “It gives the yacht a very modern feeling. The owner was so happy that he is having his chase boat painted the same color.”

The color’s heat absorption will be mitigated by a special paint, adds Poerio, that will reduce the temperature on the metal hull by 50 degrees Fahrenheit. “We’ve also added a clear coat on the black to minimize scratches and maximize the luster,” he says.

Following its launch on Saturday, the yacht will have its interior completed and then undergo sea trials. It is expected to be delivered to its owner in late November.  Tankoa

Olokun’s layout is similar to its two predecessors, including fold-down terraces in the owner’s suite of the forward main deck, a side-loading tender garage at the stern and a large beach club at the transom of the hull. But Tankoa added several important modifications, including moving the dining room from main deck to an upper deck, so there will be one large social area in the main-deck salon.

The owner also wanted the master stateroom to have a private study that can be converted to its own ensuite stateroom if the occasion calls for it. “We started the project on spec and the owner came into the project quite late during construction, but we wanted to tailor the yacht to his personal needs,” says Poerio. “The second cabin connecting to his own suite on the main deck is a good example. It meant cutting a hole in the bulkhead and re-routing all the wiring so his private office could be converted into a cabin.” Poerio says the modern interior includes gray and black finishes—including oak painted with both colors—that matches the hull.

Those kinds of modifications are not easy tasks, particularly when a superyacht is so far along in the build process. But Tankoa bills itself as a “boutique” yard that can accommodate owner requests, as opposed to larger-volume builders that cannot make last-minute changes without injecting chaos into the production cycle.

The menacing black bow could double as Darth Vader’s helmet.

“We wanted to deliver a finished product that surpasses expectations and the end result on Olokun is spectacular,” says Poerio.

Following the initial launch, Olokun’s systems will be tested and the interior completed before final sea trials. The yacht is scheduled to be delivered to its owner by the end of November.