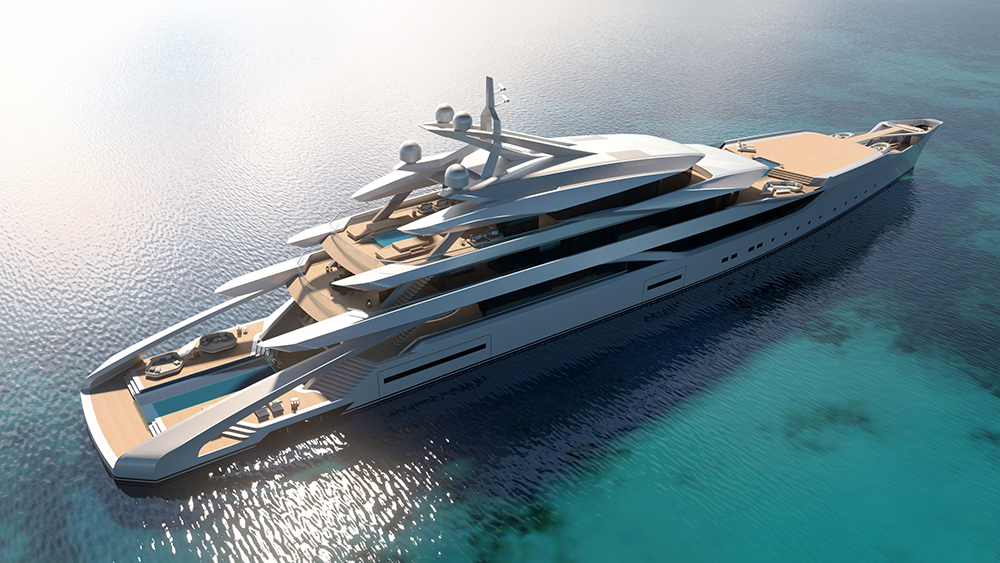 It’s rare for a superyacht the size of a football field to be “ethereal,” but Bannenberg & Rowell may have just penned the exception to the rule. The London studio has unveiled a new 367-footer that promises an airy lightness unusual for a vessel of such proportions.

The concept, known as Kappa, has swathes of glass “interwoven” with the structural elements to create “fluid-like” shapes along with a feeling of openness and transparency. The studio says this gives the vessel an “ethereal appearance” that belies her heft and size.

“Although a number of our recent designs have been imagined as yachts for the post-hedonistic age, this probably wouldn’t quite edge into that category,” the studio’s leader, Dickie Bannenberg, told Robb Report via email. “Kappa is unashamedly bold, with expansive exterior spaces, soaring architecture and an almost exo-skeletal foredeck.”

The studio has also incorporated features that meld with the surrounding sea to give those on board a sense of connection to the water. The pièce de résistance is the “amphi-lounge.” Located below deck, it is billed as an “underwater viewing gallery” where seafarers can immerse themselves in the marine world. The beach deck, meanwhile, sports a glass stern side that enables the infinity pool to seamlessly blend with the ocean.

Another standout design feature is the bird’s nest at the superyacht’s bow. Instead of one solid deck, it’s been split into many different elevations. The “island” at the tip of the bow features a table for alfresco dining and is connected to the main deck by a bridge that also doubles as a crane for the two tenders below. Elsewhere, the vessel sports a beach club and gym on the lower deck, two additional pools, a helipad, storage for two jet skis and a scuba dive store.

Regarding propulsion, Bannenberg says the superyacht could be conventionally diesel-powered, but it’s more likely to be fitted with a hybrid installation. Kappa also sports a razor-sharp bow to help her cut through the seas efficiently.

Bannenberg & Rowell is renowned for its unflinching designs that consistently push the envelope. In 2016, the studio partnered with Feadship to deliver the 230-foot, multi-deck masterpiece, Joy, which featured an outdoor basketball court, gym and disco. While that vessel was, well, a joy to behold, Kappa’s ethereal edge may just separate her from the rest.