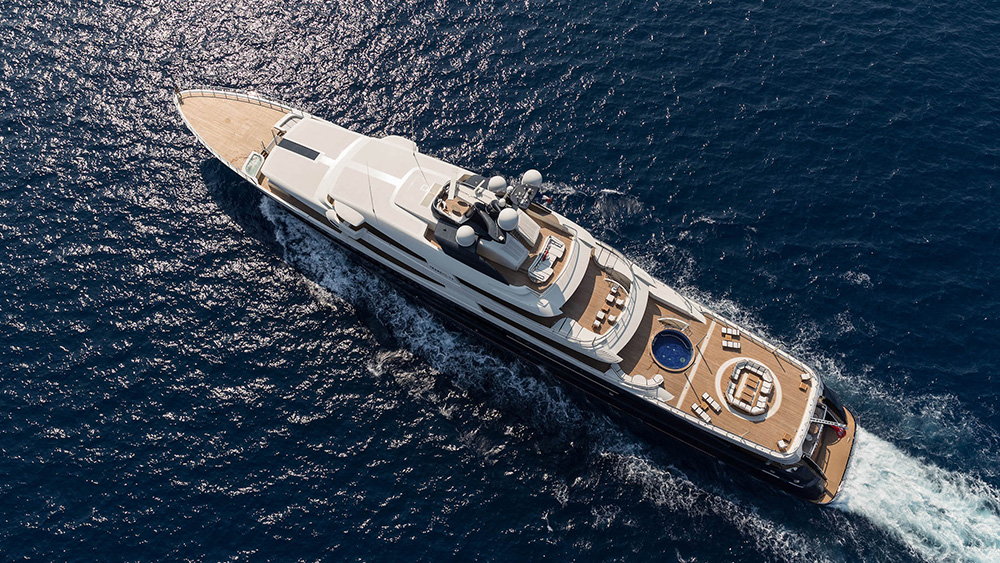 Kylie Jenner, the young American cosmetics billionaire and Keeping Up With The Kardashians reality star, is celebrating her 22nd birthday this week with a Mediterranean cruise onboard the 300-foot superyacht Tranquility. Here’s all you need to know about this floating palace.

Designed and built by the Dutch yard Oceanco and launched in 2014, she measures 300 feet bow to stern—as long as a football field—has a beam of 46 feet and weighs almost 3,000 tons.

The yacht is cruising through the Mediterranean.  Courtesy of Camper & Nicholsons

Powered by twin 4,800-horsepower MTU V-20 diesels, Tranquility has a top speed of almost 20 knots and will comfortably cruise at 15. With fuel tanks that can hold around 72,000 gallons, she has a globe-girding range of more than 5,000 nautical miles. And with an ice-classed hull, she can venture anywhere.

The back deck is lit for a party.  Courtesy of Camper & Nicholsons

There’s Room for All the Kardashians

According to Camper & Nicholsons, who arranged the charter, Tranquility can accommodate up to 22  guests in her 10 cabins. And there’s a crew of up to 31 to take care of every need. Cristal at 3am? Not a problem. Jenner’s master suite is reportedly beyond amazing, with 180-degree views, a huge bathroom with free-standing marble tub, and a private study.

It Has a Slightly Shady Past

The sleek, blue-hulled superyacht hit the headlines last summer when she was seized by Indonesian authorities off the coast of Bali. At the time she was called Equanimity and allegedly owned by fugitive banker Low Taek Jho who is accused of embezzling huge sums from the Malaysian government.

It Was Sold Cheap to a Malaysian Theme Park Company

To recoup some of the estimated $4.5 billion syphoned from Malaysia’s 1MBD state fund, the yacht, which cost a reported $250 million to build, was sold in April to casino and theme park owners Genting Group, for a fire-sale $126 million.

The pool.  Courtesy of Camper & Nicholsons

It Costs a Jaw-Dropping $1.23 Million Per Week to Charter

The superyacht joined Camper & Nicholsons’s charter fleet only in June and is currently being offered from Euro1.1 million a week – that’s around $1.23 million. But that doesn’t include expenses and crew gratuities, which could add another 25 percent to the bill. More if the Kardashians party hard. That shouldn’t be a problem for Jenner whose company, Kylie Cosmetics, is, according to Forbes, worth an estimated $900 million, and rising.

Below Decks, She’s All Luxury

With an extravagant interior designed by London’s Winch Design, the yacht has an oriental flavor with lashings of wenge, bamboo and bleached oak wood finishes, gold leaf and Travatino Veluto marble. If anyone wants to sing “Happy Birthday,” the yacht has a unique Lucite-bodied grand piano.

The pampering can happen indoors or out.  Courtesy of Camper & Nicholsons

She Offers a Whole Lot of Pampering

Among the multitude of Tranquility’s features is a spectacular indoor/outdoor wellness center. It boasts a a beauty salon, Turkish bath, sauna, gym, massage room, “experiential” showers, and plunge pool.

The yacht has two helipads for guests to fly in for the bash.  Courtesy of Camper & Nicholsons

She Has Speedy Wi-Fi

It’s not usually that important on an escape-from-it-all superyacht. But when you have 143 million Instagram followers anxiously awaiting your every post, and a family clan that’s equally social-media-savvy, it’s key.