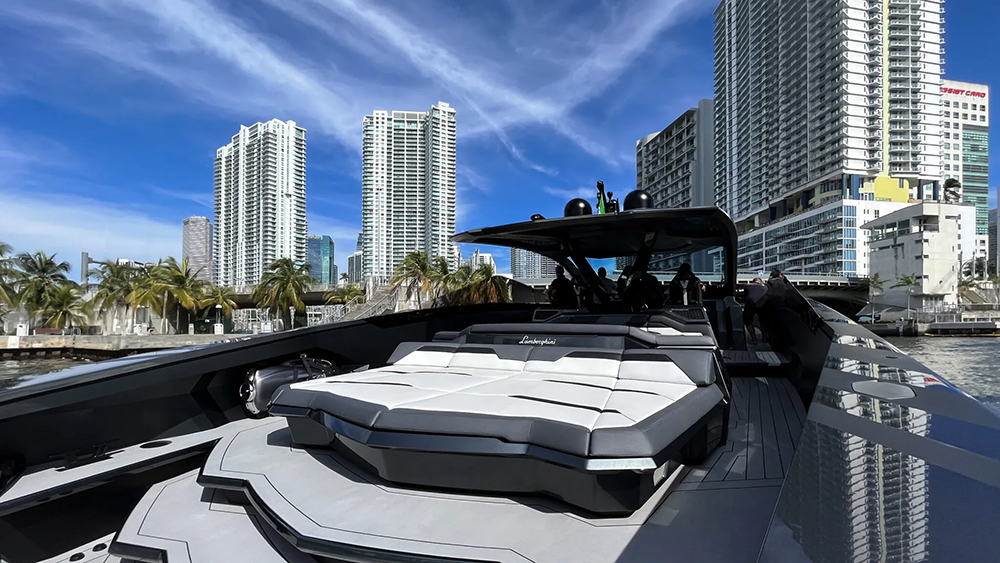 Tecnomar’s highly coveted Lamborghini 63 has finally made it stateside.

The Italian Sea Group just delivered the first ferociously styled, high-speed motoryacht in North America to Prestige Marine in Miami. The 63 references the yacht’s length in feet, the Raging Bull’s 1963 foundation and the fact that just 63 of these $3.5 million speedsters will be made.

“We are honored to have been the first to deliver this incredible 4,000 horsepower yacht with an unmistakable Lamborghini design that has already conquered South Florida,” CEO of Prestige Imports Lamborghini Miami Brett David said in a statement.

The 63-footer, which was named Best Weekend Cruiser in Robb Report’s Best of the Best earlier this year, carries Lamborghini’s unmistakable DNA and was heavily influenced by the marque’s latest supercars. The sleek styling takes cues from the limited-edition Sián FKP 37 hybrid hypercar, while the twin leather helm seats are like those of a Huracán Evo. Even the instrument panel and steering wheel mirror the Aventador’s. Other similarities include sharp, hexagonal lines, Y-shaped headlights and a supercar-like hard top. The automotive-style helm station also offers a “Corsa” or “Race” mode setting just like a Lambo dash.

Of course, the carbon-fiber speed machine offers a good amount of grunt, too. Powered by a pair of MAN V-12 diesel engines that produce 2,000 hp each, the vessel can reach a top speed of 63 knots and a cruising speed of up to 45 knots. That makes it one of the fastest 63-footers in its class. Burning roughly 100 gallons of fuel per hour, it has a range of about 360 nautical miles.

Hull number 12, reportedly delivered to MMA star Conor McGregor, was finished in the same verde gea green as the Sián FKP 37. The vessel delivered to Prestige Marine, however, sports a silver hue and was priced closer to the $4 million mark.

The debut of the Lamborghini 63 in South Florida represents an important achievement in the Italian Sea Group’s commercial expansion plan in the US. The Italian yard also recently opened its first flagship store in Long Island’s East Hampton.

“We are very proud of the success that the Tecnomar for Lamborghini 63 yacht is enjoying in the United States, a market that offers interesting growth opportunities in line with the Group’s international strategy,” the Italian Sea Group’s founder and CEO Giovanni Costantino said.

The next deliveries of the Lamborghini 63 are due to take place in the first half of 2024, according to Costantino. Stay tuned.