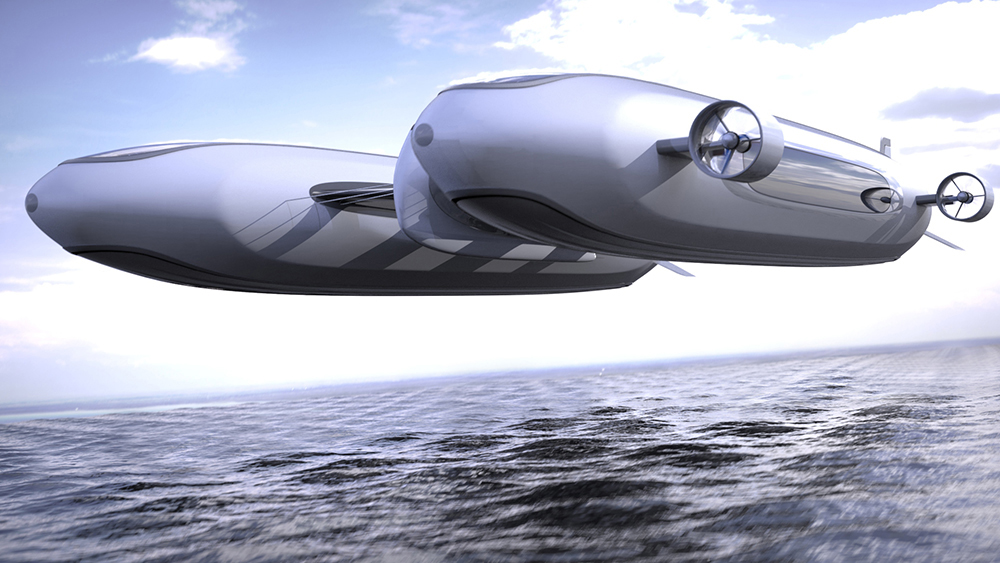 Is it a boat? Is it a plane? Well, folks, Lazzarini’s futuristic new concept is a bit of both.

The disruptive design studio, which routinely delivers extreme marine creations, has just unveiled a flying superyacht called Air Yacht that looks as though it’s come straight from a sci-fi flick. The vessel’s tech is at the bleeding edge, too, with helium being the main source of fuel.

Made from carbon fiber, the Air Yacht has one main 262-foot hull sandwiched between a pair of 492-foot airships. These two “floating balloons,” as Lazzarini describes them, will be divided into hives to store helium gas. Think of it as a superyacht with two blimps that can lift it to the skies.

The Air Yacht can either fly or sail.  Lazzarini Design

The Italian outfit hasn’t gone into too much detail regarding how this propulsion actually works but says the compressed helium allows the Air Yacht to “fly” for up to 48 hours at a top speed of 60 knots. The cruiser is also equipped with eight counter-rotating electric engines powered by ultra-light batteries and solar panels. This setup enables the yacht to sail on the water at 5 knots with no noise or pollution.

“With the Air Yacht, there is a way to sail the sky without emissions damaging the future,” the studio said in a statement.

Lazzarini assures the vessel packs all the features of a typical luxury yacht as well. The central hull comprises a large dining area and living room, along with the master cabin which offers a large ensuite and sprawling panoramic views. To top it off, this hull features a helipad and swimming pool on the roof.

The futuristic superyacht still is equipped with a swimming pool, of course.  Lazzarini Design

The two accompanying airships, meanwhile, can be accessed via four separate bridges and each offer five ensuite staterooms with expansive windows to take in the vistas when in flight.

As for who will pilot the Air Yacht, Lazzarini says the vessel is not intended for “touristic purposes.”

The interior of the Air Yacht is fittingly modern.  Lazzarini Design

“It’s for a private owner who wants both a superyacht and evolution in aviation,” the studio adds.

Like all of Lazzarini’s creations, from the swan-shaped megayacht to the 276-foot superyacht with a giant hole in the superstructure, the Air Yacht will remain a concept until somebody chooses to make it a reality.