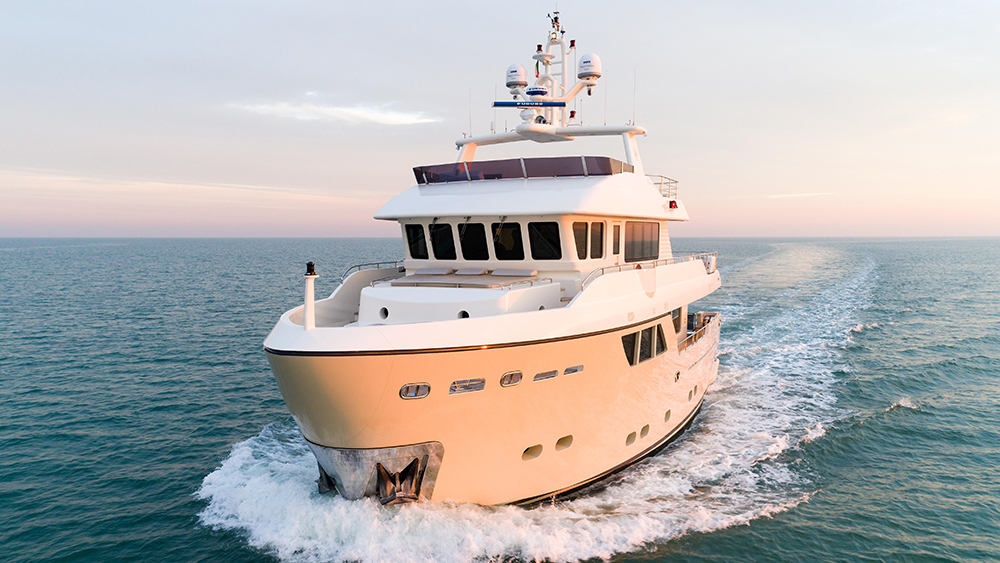 Opera superstar Andrea Bocelli wants to go places. Which is why he’s just become the new owner of the rugged Darwin 86 expedition yacht Stella del Nord. With full tanks, this 195-ton trawler-style motor yacht can cover over 6,700 miles at its sedate 8.5-knot cruising speed. That’s Rome to Miami with fuel to spare.

Bocelli traded his much-loved 72-foot Gamma 22 Libertas he bought new in 2014, for the used Italian Cantiere delle Marche–built Darwin. Delivered in 2015, it was last listed by Italian yacht broker Corte Srl for €6.1 million, or roughly $6.8 million.

According to CdM cofounder Vasco Buonpensiere: “Mr. Bocelli was looking for an explorer that would allow him and his family to sail far and wide, and comfortably, even in the most severe weather conditions.”

Seems he chose well. After taking delivery of the Darwin, the 60-year-old Bocelli and crew motored away from the CdM yard in Lavagna in Northern Italy, set course for Naples and headed straight into a howling, late-spring Tramontana storm.

Sig. Buonpensiere says boat and crew arrived safely and in plenty of time for the Tuscan tenor to make his scheduled concert at Naples’s Teatro San Carlo opera house.

Stella del Nord is the fourth Darwin Class 86 designed by Italian naval architects Hydro Tec. It was commissioned for an American owner who reportedly added more than $1 million in options making it the highest-spec Darwin 86 built.

Like all Darwin 86s, it’s constructed of steel with an aluminum superstructure. Power comes from a pair of low-revving 12-liter Caterpillar C12 diesels packing 385 hp apiece giving a total of 770 hp. Top speed is a stately 11 knots.

The yacht sleeps up to eight guests in four staterooms, with room for a crew of five in two cabins. The interior decor is currently light and airy with elm panelling and iroko flooring.

For relaxing there are two lounges, one on the main deck, and one on the upper. The upper-deck skylounge doubles as a library with three sofas for kicking back.

There’s no word on whether Bocelli has transferred his Yamaha electric piano from Libertas to Stella del Nord, though with so much interior space he might be tempted to upgrade to a baby grand.

Stella del Nord is the eighth boat Bocelli has owned in the past 19 years, which is remarkable considering the singer has been blind since the age of 12.

With Bocelli about to embark on a punishing world tour—his first US concert is in Sacramento, Calif., on June 15—it will be interesting to see if he moves Stella del Nord to Miami where he owns a waterfront home with its own dock.

Certainly crossing the Atlantic will pose no problem for the rugged, world-girding explorer.