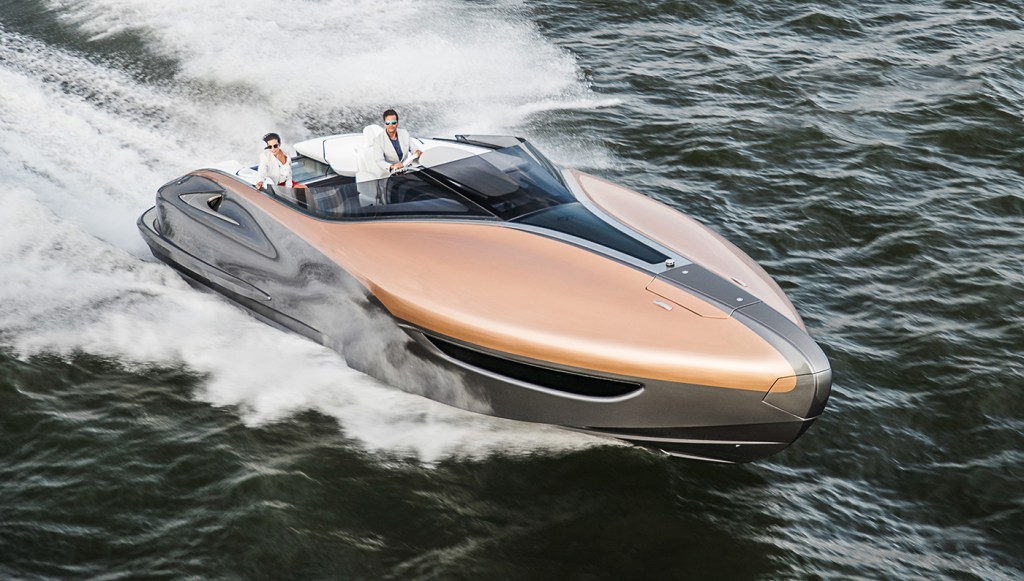 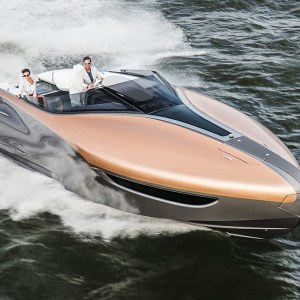 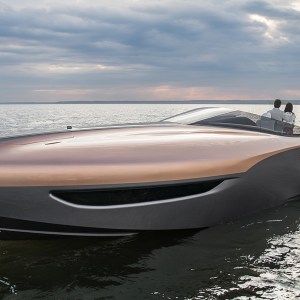 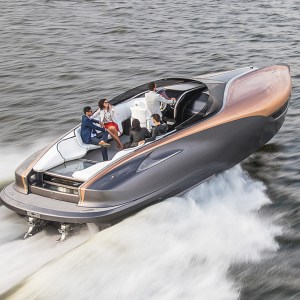 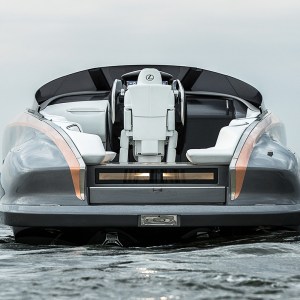 How do you get the head of the world’s largest car manufacturer to smile? Give him a beautiful new boat. Toyota Motor Corporation president Akio Toyoda was beaming when he arrived at a Miami Beach waterfront mansion last week piloting the new Lexus Sport Yacht, a 42-foot one-off concept styled by Lexus designers, engineered by the Toyota Marine Department, and built by Marquis Yachts of Pulaski, Wis.

Toyoda, who is also the chief branding officer for Lexus International, Toyota’s luxury-car division, authorized the yacht’s development two years ago as a way of promoting the “Lexus lifestyle.”

The concept’s twin V-8 gasoline engines produce a total of 950 hp and enable a top speed of 49 mph. The engine is based on the one that powers Lexus’ new LC 500 coupe. A “turbo-boost” option at the helm adds 1,000 rpm over the rev limiter for a heart-pounding burst of speed. The Sport Yacht concept’s hull is made entirely of carbon-fiber reinforced plastic, saving about 2,200 pounds. A 7-inch-diagonal touchscreen in the center of the steering wheel gives the captain control of the boat’s navigation and entertainment systems.

“No boat this size has ever had anything resembling the complexity of this yacht,” Josh Delforge, Marquis’ vice president of design, said in Miami. “It’s touchscreen everything, so all systems can also be controlled by an iPad. You’d find this same type of system on a custom superyacht.”

Yoshira Yoshihiro Sawa, the head of design at Lexus, pointed to the yacht concept’s design elements that were inspired by the brand’s LFA supercar . He noted the large, aggressive-looking forefoot, and the way the exterior lines run seamlessly from stern to bow, without any sharp edges. “The lines of the boat are never interrupted,” said Sawa. “They just flow from one end to the other.”

There are no walkways from the stern to the bow, because they would ruin the flowing profile. Instead, there is a panel at the forward end of the saloon and a set of steps that lead to a hatch on the foredeck. The hatch allows a deckhand to aid in anchoring and mooring the yacht. The seats lining the sides of the cockpit accommodate up to eight  passengers and are shaped like a series of wave tops. Their form is functional. “The shape allows the guests to face each other,” says Sawa. “But when the boat is running, everyone can turn and face forward.”

The cabinetry, paneling, and upholstery were made in Italy and shipped to Wisconsin, where the interior was assebmled. The lounge-feeling interior features hand-painted glass panels on the walls that resemble dark gray marble, a curvy-striped etched-glass floor, and a long, off-white-leather couch that can seat eight—all under a skylight bearing the Lexus logo. (lexus.com; marquisyachts.com)