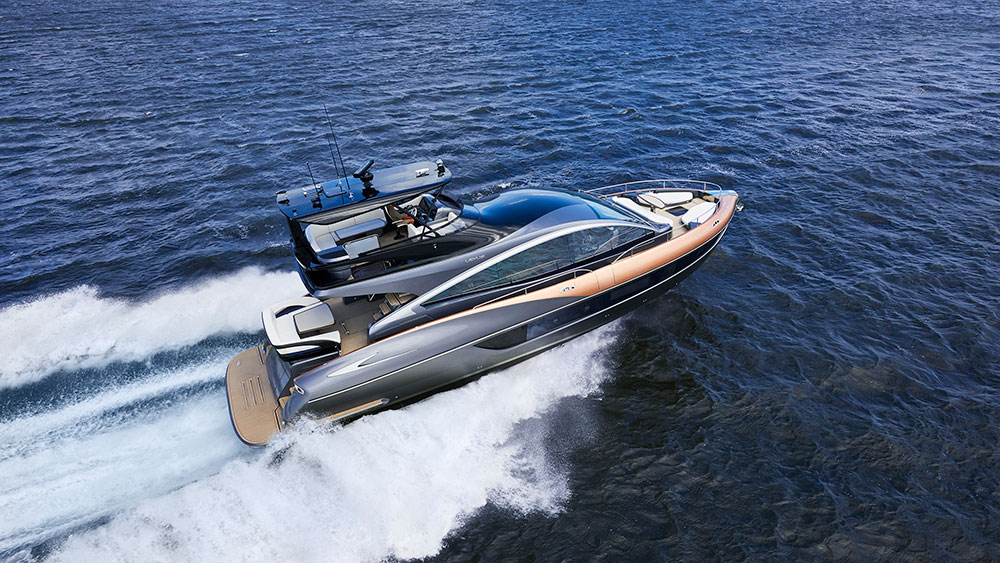 The forecast is enough to send a Weather Channel anchor into a frenzy. Winds steady at 22 mph, gusting to a feisty 28. Frothy seas running at 6 to 8 feet high. Forty percent chance of a downpour. No, not a great day for boating.

“I’m game if you are,” deadpans Randy Peterson, propulsion engineer for Marquis Yachts. He’s also captain of the new Lexus LY 650, a 2,700 hp flybridge cruiser that we’re here in Boca Raton, Fla., to helm as part of its first big-weather sea trial. Yesterday, the sleek 65-footer made its global debut, and today Robb Report is getting an exclusive first crack at driving this boat through the choppy Atlantic.

Peterson fires up the dual 12.8-liter, turbocharged Volvo D13 engines, each delivering 1,350 hp to compact Volvo IPS drives with twin, forward-facing props. On flat water, and with light loading, this 73,000-pound speedster can zoom to 33.5 knots and go from a standstill to planing in only 12.5 seconds. But we’re not headed to flat water.

We ease out of the Boca Raton inlet and brace for the ocean rollers lunging toward us. Time to power up. I push forward on the throttles and hang on as the LY 650’s flared bow lifts gently and cuts through the heavy swell. Although the big engines spin at 2,450 rpm on wide-open throttle, there’s only the faintest hum from the seriously insulated engine room. And the carbon-reinforced hull does a stellar job of tracking straight and riding smooth through the washing-machine seas. The hull design—unique to the LY—is the work of Wisconsin’s Marquis Yachts together with marine architects Donald L. Blount and Associates, of Chesapeake, Va. Marquis’s Josh Delforge, with considerable input from the Lexus design team in Japan, gave the LY 650 curvy, head-turning lines that evolved from the stunning 42-foot Lexus Sport Yacht Concept, which debuted in Miami in 2017: same distinctive bow, same voluptuous hindquarters and same rich copper-and-steely gray exterior palette.

Inside, the white interior is the work of Italian design powerhouse Nuvolari Lenard. Step down into the light-filled central atrium and doors lead to three cabins. The full-beam owner’s stateroom presents vast hull windows, atmospheric lighting and mirror-finished eucalyptus woodwork that could have come straight out of the latest LS flagship sedan.

But why a Lexus yacht? According to Toyota Motor Corporation president and passionate boater, Akio Toyoda, it’s a means of furthering the automaker’s quest to become a true luxury lifestyle brand and to showcase the marque’s craftsmanship to the marine market. From where I’m standing at the helm, the LY is a serious performance contender.

After an hour or so running at an easy 28 knots, I steer hard to starboard to enter Fort Lauderdale’s deep-water ship channel. Despite the frothy seas, the craft carves easily into the turn and shrugs off the whitecaps, feeling stable and inspiring confidence.

“Quite a ride,” says Peterson as we tie up at Lauderdale’s Pier Sixty-Six Marina. “I was really happy with the way it took the waves. That was pretty rough out there.” But it was also exhilarating.

Marquis Yachts has already sold three Lexus LY 650s (priced starting at $3.6 million), including our well-equipped $4.7 million example, and a fourth is being built. Next year there’ll be a non-flybridge version, and a 48-footer may also be on the horizon. It might not be long before you overhear someone saying, “My next boat’s a Lexus.”