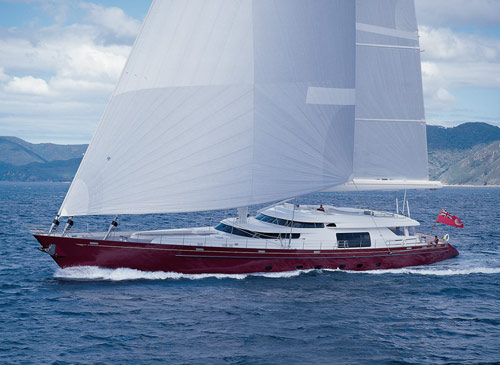 You could comfortably live year-round in a sailboat designed by John Munford, enjoying the wide-open galley, the gadget-filled saloon, the mahogany paneling, and the cherry furniture. Still, even the most finely appointed and well-equipped sailboat has characteristics that you wouldn’t want in your home—the paucity of natural light, the absence of freestanding furniture, the tendency to heel and sway in strong winds.

Some features can’t be adapted to your wishes, so instead, you must adapt to your surroundings. “It’s as if you bought a 14th-century house in England. If you’re 6 foot 5, you would duck going through the doorway—you wouldn’t cut it out,” says Munford, principal of John Munford Design, an English firm that specializes in sailboat interior design. “You’re fitting into the history of it. Yachting has the same sort of effect. You know it has to perform in a particular way.”

While a 150-foot powerboat and a 150-foot sailboat are identical in length, the size of the latter’s interior, because of its curved hull and equipment that must be crammed belowdecks, is usually half that of its power counterpart. “There are far more curves to deal with, whereas powerboat spaces can be more rectangular,” says Glade Johnson, president of Glade Johnson Design, a Washington-based firm. “With a sailboat, it’s like working in a bathtub.”

From Homer the poet of ancient Greece to Homer the 19th-century painter, sailing has been romanticized, etching in our consciences a certain look—swooping lines, mahogany interiors, spartan staterooms—that each vessel must conform to. The designer’s challenge is to craft not only a comfortable, modern interior with all of today’s technology, but one that also embraces sailing’s historical elegance. “If you’re looking at a traditional sailboat, that’s the perception of what is beautiful,” says Bill Dixon, managing director of Dixon Yacht Design, another English firm. “You might not say a modern sailboat is beautiful, but you would say it’s functional.”

Some owners, builders, and design firms, despite the logistical challenges and preconceptions of what a sailboat should look like, are willing to try innovative looks, sometimes blending traditional concepts with modern ideas. Robert Miller, the owner of Mari Cha III, a 145-foot sailboat built by Sensation New Zealand, wanted to sail fast—very fast. Miller, who hired Munford as the interior designer, hoped to set the west-to-east transatlantic record by a monohull sailboat, so he needed Mari Cha III to be as light as possible. The sailboat’s total weight was set at 115 tons, and the interior was capped at 6.5 tons (the average interior of a similar-size boat is 20 tons).

Munford designed the main saloon and guest cabins so that the compartments could be removed for racing. He used as little steel as possible, and created interior paneling using lightweight woods with mahogany veneer. In 1998, Mari Cha IIIsucceeded in breaking the record by completing the 2,925-mile transatlantic journey in eight days, 23 hours, 59 minutes, and 41 seconds. “Even the reading had to be light,” jokes Munford. “It was certainly a challenge, but for her to get the record for the transatlantic was a highlight. She did what she was meant to do. Looking at the boat, you would not know it was lightweight.”

While some owners have their sailboats built for spray-soaked racing, others opt for designs that are more suited for leisurely cruising. London-based Andrew Winch Designs is working on a 130-foot sloop that serves as both a home and a performance-oriented craft. The owners plan to sail around the world for two years on the sailboat, along with their five children, two teachers, and six crewmembers—and they want to sail fast. The boat has a sleek, low structure to give it speed, and the interior, which is made of maple, includes a library in which the children can study and a saloon for social activities. “The lower saloon area is more of an introspective space,” says designer Andrew Winch. “They can look at each other and talk, but they can also watch TV, read, and play card games.”

The owners of Freya, an 80-foot Alloy Yachts vessel, ordered a piano for their sailboat, and Dixon designed an interior that would accommodate the instrument and amplify the sound. Dixon also worked on Hanseat IV, an 80-foot Austral Yachts sailboat that features a traditional solid, fielded-panel interior with detailed woodwork, and something else that contributes to the vessel’s old-world feel: a gas fireplace. “What a nightmare,” says Dixon. “It must be the most expensive small fire ever built. It’s easy in a house, but it’s bloody difficult to get in a sailboat.”

Despite Dixon’s complaints, he and other interior designers prefer intrepid owners who are willing to take chances. Most sailboats have small windows that are almost always above your sight line when you sit down in a lounge or cabin. But the owner of Georgia, a 159-foot Alloy Yachts sailboat, broke from the norm and told Johnson that he wanted to look down on the water from the boat’s windows. Johnson accommodated the request and maintained the vessel’s low profile by designing larger windows.

Georgia’s owner also wanted the sail equipment to be hidden below the deck, an unusual feature on sailboats. Johnson had to devise special compartments, so he designed containers similar to 50-gallon drums in which to store the equipment unobtrusively belowdecks. “If you get an owner who’s willing to do something that’s challenging from the technical side, things that have been thought to be totally traditional can change,” Johnson says. “You come up with something that provides a heightened sense of enjoyment for the owner.”

The typical sailboat owner has grown up on sailboats and knows exactly how they work, says Bruce King, president of Bruce King Yacht Design in Newcastle, Maine. “They see the boat as entirely separate and not connected to their home,” he says. “They want it to be a completely different environment. It’s a boat, not an extension to a house. That’s the main difference between a powerboat and a sailboat.”

“They’re enthusiasts,” adds Dixon. “In general, they’re more detailed people. It’s very much a hands-on process for them. They really get involved, more so than motorboat owners. By nature, the client is more demanding and wants to get more intensely involved.”

His clients’ knowledge and familiarity with sailboats do not preclude Munford from playing visual tricks on them. Because interior real estate is precious, Munford creates the illusion that there is more space than there actually is. For a 125-foot sailboat, for example, Munford designs furniture that is 7/8 scale. The slightly shrunken chairs, tables, and couches fulfill their functions while making a cabin, saloon, dining area, or stateroom seem larger than it is.

Munford also always designs his interiors with cambered ceilings, because level ceilings can give a space a greater feeling of enclosure. Skylights also add natural light and expand the sense of openness in a cabin. Yet cozy confines, while restrictive at times, can give a sailboat a more intimate atmosphere. “The thing about sailing boats is that they have a feeling to them,” says Munford. “You have to work on it. In it. With it. Rather than it simply surrounding you like a hotel, the whole working thing functions around you.”

Although designing a sailboat can provide much pleasure, the process can also initiate an addiction that might be hard to shake. Johnson says most of his clients get more pleasure from helping to design their boats than from sailing them. “Once the boats are finished, they enjoy them, but they miss the process,” says Johnson. “Not too long after, they’re back and thinking, ‘What can we do next time?’ ”