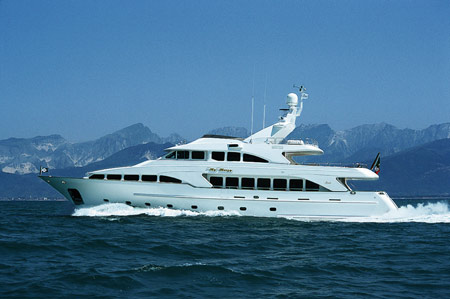 The 6-year-old boy, dressed in a new suit and tie, gripped the Dom Pérignon and swung it with all his might toward the bow of the yacht. When he released the Champagne, the bottle soared 30 feet and smashed into the gleaming fiberglass hull of My Marzy. Onlookers cheered and clapped as J.T. Boll christened his grandparents’ 115-foot yacht in Viareggio, Italy, where the boat had been built.

It was a day that was two years in the making. Cocktails flowed, and guests nibbled on hors d’oeuvres, as a three-piece band played in the background. John and Marlene Boll, the owners of the new Benetti superyacht, beamed as they led their guests on a tour of their floating palace. The guests marveled as they visited the living room with the built-in wet bar and creamy silk sofas, the master suite decorated with rich fabrics and gleaming cherry wood, and the master bath with the brass-laden marble shower. They praised the yacht as luxurious, opulent, and extravagant—the exact adjectives the Bolls had in mind when they first set out to build their boat.

The trideck superyacht is a fully customized vessel crammed with personal touches, such as handcrafted furniture and commissioned artwork, that the Bolls wanted onboard. But John and Marlene, who are real estate developers from Grosse Pointe Shores, Mich., see themselves as average boaters: people who are seeking a yacht larger than the one they own. “As different as they are, boaters are a pretty predictable bunch,” says John. “Every few years or so, like clockwork, they want to upgrade their existing vessel for one that is bigger, better, and faster—even if it’s just a few feet or so. Marlene and I are certainly no exception.”

The Bolls are different, however, in that they were involved in every step of the design and building process of their Benetti, a project that began when their too-big Azimut suddenly became too small. In the 40 years that the Bolls—longtime Great Lakes sailors—have been living and loving the cruising lifestyle, they have owned approximately 20 new boats.

Every one of the boats has been built exactly the way the Bolls specified, including their first 21-foot runabout that John finished himself, their 41-foot Chris-Craft powerboat, their 53-foot Ted Hood Little Harbor sailboat, and their 70-foot Azimut motoryacht. “With 40 years on the water, we know what works best for us,” says Marlene. “I want a galley with a porcelain sink and a garbage disposal, and John wants enough space to cruise comfortably, whether alone, with guests, or with our three children and eight grandchildren.”

On their Azimut, Marlene liked the galley and John had plenty of space—too much, in fact. After a few seasons of cruising, the Bolls found that the yacht was too large to operate on their own. They hired a captain, freeing them from many of their responsibilities so they could invite friends along for their extended cruises, and they also hired a chef and a deckhand. But the solution that had seemed so obvious had created another problem. “Suddenly our 70-foot boat that was once too big had become too small,” says John with a laugh. “So we were faced with a decision: We could scale back down to a size that we could handle by ourselves—as many boaters do—or we could go bigger.”

They decided on bigger.

The Bolls’ primary desire was to own a 100-foot yacht that they could help design. They also wanted a boat made of fiberglass, because in John’s opinion, such a vessel would require less maintenance, provide better insulation, and run quieter than aluminum and steel boats.

The Bolls’ research, along with their 40 years of boating experience, led them to three candidates to build the boat: Palmer Johnson in Wisconsin, Amels in Holland, and Italy’s Benetti. The Bolls visited each of the yards, but only Benetti designed fiberglass yachts over 100 feet.

In 1998, when the Bolls were making their decision, Benetti had created a mold for the Benetti Classic, a first-of-its-kind 115-foot fiberglass trideck motoryacht. The Benetti Classic was unique not only because of its fiberglass construction, but also because shipbuilders do not typically construct trideck yachts of that size. If you are building a trideck, you usually need to build a craft that is 125 feet or longer to balance the height of three decks. Benetti solved this problem by designing the Classic with a fully displaced, nonplaning hull that pushes through the water, rather than riding on top of it. Benetti also added extra weight in the keel to offset the height.

Another factor in the Bolls’ decision to go with Benetti was that their boat would be hull number six, not the first hull out of a new mold. “We had the advantage of seeing the first five boats being built, and we were able to reap the benefits that can only come with experience,” says John. “When we chose Benetti, we were given a lot of freedom with the design of the boat. Aside from major bulkheads, we could move whatever we wanted. It was so much easier being able to walk through a finished yacht instead of trying to visualize it simply by looking at plans. We saw all the changes the other owners made—those we liked and those we did not. Then when it was time to begin construction on our yacht, we incorporated some of those ideas with many more of our own.”

Before the Bolls launched the design and building process, they hired a lawyer who specializes in admiralty law to oversee the Benetti contract. The Bolls and their attorney spent almost a year negotiating the contract, holding meetings in the United States and in Italy. In the contract, John stipulated different limits for stateroom noise levels, be it from engines, air-conditioning, or generators, at sleeping height (3 feet) and standing height (6 feet). Both sides also agreed to the yacht’s delivery date and a payment schedule. “You need to have a detailed contract in the event that there’s a problem,” says John. “It’s necessary to develop a contract in such a way that if by the off chance you go to court, you’ve put yourself in the best possible situation. Through it all, Benetti was very fair. As long as we could explain why we wanted to do something, they were amenable.”

After the Bolls and Benetti agreed on the contract, construction on My Marzy (Marlene’s nickname) began in the spring of 1999. Benetti completed the superstructure and fiberglass lamination of the hull in Fano, on the east coast of Italy. Then the yacht was towed around Italy to Viareggio, on the country’s west coast, where she was outfitted based on the specifications of the Bolls and their design team.

The Bolls visited Viareggio several times during construction of My Marzy, but wanted their own representatives on site to oversee the process. Nicholas Thompson, the Bolls’ captain, stayed in Viareggio during construction, and the Bolls also hired Wim Koersvelt, a project manager from Holland. Koersvelt traveled to Viareggio every few weeks and spent three days during each visit inspecting the yacht. Koersvelt would then meet with Thompson and go over everything that needed to be modified or fixed. “Throughout the project, Marlene and I stayed in constant touch with Nicholas and Wim,” says John. “They were our point men.” (Click image to enlarge)

Meanwhile, the Bolls were busy as well. They hired D.J. Kennedy, who had designed their homes in the States, to work with Francois Zuretti, Benetti’s designer. Together, John, Marlene, Kennedy, and Zuretti modified Benetti’s original interior design, specifying every possible detail, including door handles and faucets. They added polished cherry wood beams to the ceilings in the salon, living area, and dining room. They designed a marble shower in the center of the master bathroom, dividing the space into his and her sections. They specified the type of fish tanks they wanted. They commissioned artwork to match the decor, including a bronze sculpture of a Spanish ballerina. “It is a small thing, but very special to us because Marlene was a Rockette at Radio City Music Hall in New York City,” says John.

Other changes were more major. Originally, Benetti had designed the yacht so it could be chartered. In addition to the master suite on the main deck, there were four staterooms belowdecks, so the yacht could accommodate the Bolls and eight guests. The Bolls, however, did not want to charter My Marzy or cruise with eight other people, so they converted two of the staterooms into one larger, more comfortable VIP suite. “How many people you can sleep actually dictates the design of the rest of the yacht,” John says. “If you can sleep 10, you had better be sure you can seat 10 at the dining table, entertain 10 in the salon, and cruise with 10 on the bridge. That is too many for us, so we dialed it back to eight.”

The Bolls also made sure to include their crew in the design process. Thompson was solely responsible for designing the bridge, and chef Elizabeth Alley oversaw the design and construction of the galley. Neil Brebner, the yacht’s engineer, and Alexandria Theron, My Marzy’s first mate, coordinated the mechanical installations. Because they were involved from the start, the crew members learned how every single system on the boat worked. “Benetti really thought the boat out well,” John says. “They put so much time and care into it that although the changes we made seem quite extensive, they really are not. We got to do the fun part: picking out color schemes, woodwork, furniture, drapes, blinds, carpeting, and artwork. It was Benetti who had to do the real work: putting it all together.”

Such hands-on owner involvement might have rankled some builders, but Benetti accommodated every one of the Bolls’ requests. The Bolls shipped everything for My Marzy’s interior from the States: furniture, lamps, carpets, and cushions—even soap and toothpaste. “We had to do a lot of scrambling to obtain the customs clearance for all the things the Bolls wanted shipped,” says Alfonso Postorino, Benetti’s former sales and marketing manager. “But following the American team’s instructions, we built a wonderful 115-foot custom motoryacht quite different from the other Benetti Classics.”

In July 2000, after 14 months of construction, Benetti completed My Marzy. The boat was finished only two weeks later than the original date set in the contract. “The reason for this success was the teamwork of all the parties involved,” says Postorino. “Not just our shipyard, but also the owners, their project manager, their captain, and the rest of their crew. Mr. Boll’s yacht has been one of the most exciting projects we have worked on in the last few years.”

After the christening, the Bolls spent four months cruising the Mediterranean. They visited Sardinia, Sicily, and each Riviera—the Italian, Spanish, and French—before sending My Marzy to Antigua on a yacht transfer. Once there, John and Marlene spent the winter of 2000 cruising the Caribbean, then sailed her on the St. Lawrence River to the Great Lakes for the summer. This past fall, they cruised along the East Coast to the yacht’s home base at Ocean Reef in Key Largo, and they had planned to cruise in the Bahamas this winter. “We have logged more than 16,000 miles already,” says John. “And we have only just begun.”