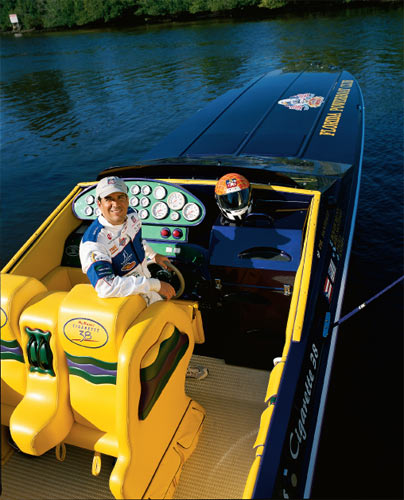 March One weekend last may, Gerry Santiago was in first place in the Fort Myers Beach Offshore Grand Prix boat race in Florida, when something went wrong. On the last lap of the 6.7-mile course, Zero Cavity, Santiago’s 24-foot Reindl raceboat, suddenly slammed into a wave at 80 mph and vaulted out of the water. As the boat streaked through the air, Santiago was not thinking of the danger he was in. “I knew I should have been scared, but I found myself thinking this was pretty cool,” says Santiago. “In the back of my mind, I knew I should have been concerned with my safety or the boat, but all I kept thinking was how exciting this was and how mad my wife would be. She has never been happy about me racing, and I was pretty sure that now she’d like it even less.”

Zero Cavity landed upside down, but Santiago and Enrico Ochoa, his throttleman, freed themselves from their harnesses and exited the cockpit uninjured. The hull was damaged, the electronics ruined, and Santiago had a race in Texas in two weeks. “The crew had to work like maniacs to get the boat ready for Texas, and it took almost the whole two weeks for me to calm down my wife,” Santiago says.

Santiago’s experience exemplifies the thrill-and-peril cocktail that intoxicates powerboat racers. What makes his story unique, however, is that on Monday mornings, he trades his blue-and-white racing uniform for a white lab coat and becomes Dr. Gerardo Santiago, D.D.S., a 37-year-old pediatric dentist in Naples, Florida.

On weekends, the dentist competes in American Power Boat Association (APBA) races against boats driven by professional drivers and maintained by full-time crews. Prior to 1999, he had never raced and was a novice at boating. Last year, Santiago won the APBA Southeast Division Championship and the Florida Powerboat Club’s Gold Cup, and finished third at the APBA Worlds in Key West, Fla. “I love what I do, but racing is my life now,” he says. “There is always danger in it, as I found out last May, but despite all that, the crash was still my best moment. I do this because of how it makes me feel. I get a lot of enjoyment from being a pediatric dentist, and I love my work, but I’m most alive when I’m racing.”

There are growing numbers of boaters like Santiago who transform from white-collar professionals into high-profile racers on the weekend. The APBA, which holds races in Florida, Texas, Ohio, and Ontario, Canada, offers several classes geared toward nonprofessional racers. Phil Lipschultz, a Miami-based Cigarette dealer and former racer, says there are two requirements to become a powerboat racer: the ability to afford a boat and the commitment to race it. “This is a sport where you can get as involved as you want to,” Lipschultz says. “Some guys are content racing the same boat they use to cruise with family and friends, and maybe entering one race per year. Others are racing a full schedule and fielding virtually a professional race team. The difference comes down to how much time and money you want to dedicate to it.”

Outlaw Performance, the class in which Santiago races, is categorized by top speed, regardless of boat size, modifications, or number of engines. For example, if you enter your boat in an Outlaw Performance 70-mph top-speed class, you’re not allowed to exceed that speed on the race course, or you will be disqualified. Santiago also races in a new boat that he purchased last year: a 24-foot Reindl with a Mercury Scorpion 377 engine.

In 1998, Santiago bought his first speedboat, a 22-foot Donzi, to take his wife, Meyle, and their children, Paola and Andres, cruising. He entered the Donzi in a poker run, an event in which boats cruise around a course, making stops—at an island or a marina, for example—to pick up playing cards at specific locations. The racer with the top poker hand wins the event. As he whipped his Donzi through the poker run, Santiago immediately fell in love with the speed of the craft, but learned he needed a bigger boat to be a competitive racer. He bought a 38-foot Cigarette and hired Roger Munn and Mark McManus, two boat designers and builders, to modify the craft for racing. Six months after his introduction to boating, Santiago entered his first APBA race. “It was even better than I hoped. I was hooked,” says Santiago. “Like they say, speed changes everything.”

Many weekend racers begin APBA competition in the One Design V class, in which boaters race identical 24-foot Reindl boats called Bat Boats because of their closed cockpits and elongated shapes. They are made of carbon fiber and Kevlar and powered by Volvo engines. Chris Reindl, the designer and builder of the boats, believes One Design V offers the most competitive racing of the APBA classes. “Because all the equipment is the same, it all comes down to the driver and throttleman,” says Reindl.

If you want speed, Lipschultz recommends boats such as Cigarettes, Sonics, and Apaches to race in the Factory I and II classes. The classes include stock boats, powered by either one or two engines, that can cost more than $175,000. “To me, these are the true offshore racers,” says Lipschultz. “They are designed for offshore use, so they are safer and easier to handle in rough water. The boats are box-stock, so you can still use them for pleasure. And because there are usually about a dozen boats competing in this class, a mix of pro racers and amateurs, the level of competition is much higher than in some of the other classes where you may only race against one or two other boats. When you win a race in the Factory class, it’s a real accomplishment.” (Click image to enlarge)

Sometimes, just finishing a race in one piece is an accomplishment. In the first run of last year’s APBA Worlds, one boat smashed into a large wave, tossing its two-man crew out of the cockpit. The racers made it to shore safely, but race organizers postponed the event for two weeks until water conditions, made dangerous by Hurricane Michelle, improved.

Santiago accepts the danger, because with it comes the excitement of racing. He has swiftly transformed his boat, which he originally bought as a family cruiser, into a race-winning vessel, while still pursuing his career as a dentist. Monday through Thursday, Santiago tends to teeth at the Children’s Dentistry of Naples, and on Friday he volunteers with the Collier County Health Department, providing dental care to children whose families could not otherwise afford it. On weekends, he hands out toothbrushes to children before and after each APBA race. Ochoa, his throttleman, is also a dentist, and the Zero Cavity team logo is a gleaming tooth.

When Santiago and Ochoa recorded their third-place performance at the APBA Worlds in Key West last November, Zero Cavity shot out to a quick lead and ran in first place for several laps. However, the water was choppy, and two larger boats eventually overtook Santiago’s 38-foot Cigarette. “On the water, size matters—the longer the boat, the faster it is,” says Santiago. “So it was just a matter of time before the bigger boats in my class passed me. Still, I’m happy with how we did, and I loved every minute of it.”

What pleased Santiago just as much as his third-place finish was the star treatment he received after the race. Santiago, his family, and his crew enjoyed the admiration of the locals—hardly the type of attention that a dentist is used to attracting. Racing fans, who traveled to Key West from as far as California to watch the event, flocked around Santi-ago to ask for autographs and admire Zero Cavity. “The city made a big deal out of the races, so we were treated like visiting royalty everywhere we went,” he says. “These are the kinds of things that make being a racer so worthwhile.”

For Santiago, however, there are also other, less selfish reasons for being a racer. He works with Big Brothers Big Sisters of America, Ronald McDonald House Charities, and the Make-A-Wish Foundation, giving rides to ill and disadvantaged children. “For just a few moments, as we fly across the water, these kids can forget all their problems and be happy,” says Santiago. “It’s the same for me. During the week, I’m 100 percent a dentist, but I can’t wait to get back out on the water again.”