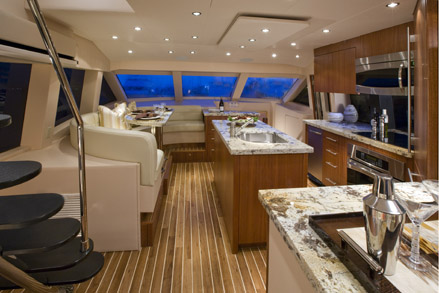 Making its debut in June, the new Hatteras 56 Motor Yacht is a fresh departure for the legendary North Carolina builder of motoryachts and sportsfishermen. Priced under $2 million, its entry-level 56 brings a new echelon of affordability to Hatteras ownership. But the yachts still provide the same Hatteras solid-fiberglass construction and elegant interiors that are built for tough offshore running.

The 56’s 18-foot beam gives it as much interior space as yachts in the 65-foot range. The wood-clad interior, including a 130-square-foot full-beam master suite and separate VIP quarters, provides lavish comfort for cruising, while the twin 705hp Cummins diesel engines gives it a range of 300 miles at 18 knots. It reaches a very respectable end of 21 knots. “This yacht allows entrance into the Hatteras family and will appeal to boaters in waters like the Great Lakes or Northern Europe,” says Keri Theophilus, president of the Hatteras Collection. Theophilus says the 56 will remain the baby of the Hatteras fleet: “We won’t build boats smaller than this.” (252.633.3101, www.hatterasyachts.com)