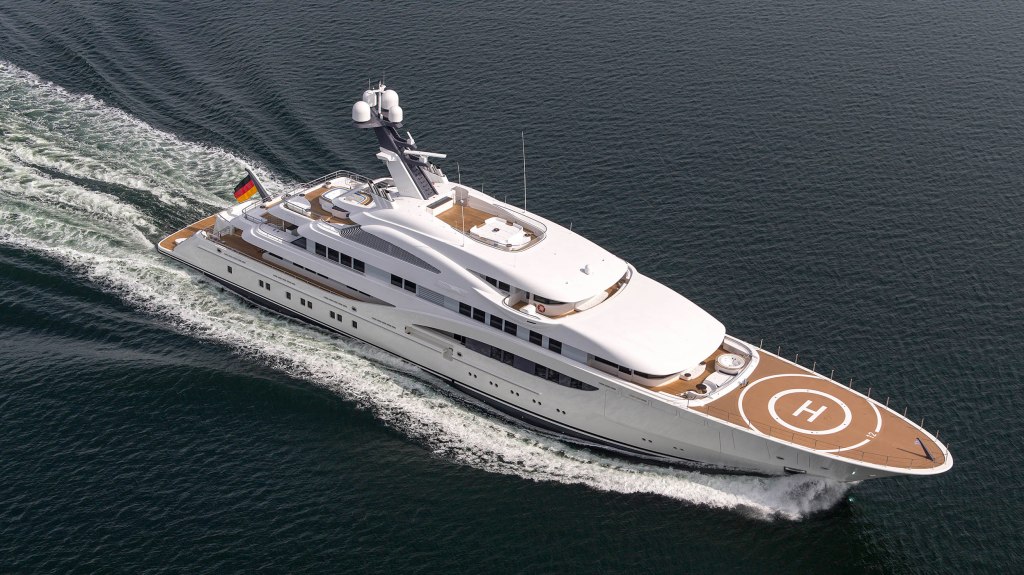 After completing sea trials, Lürssen delivered the 279-foot Areti last Wednesday, so the owner can spend the summer in the Mediterranean. The newest Lürssen will make its public debut at the Monaco Yacht Show. Winch Design, responsible for both the interior and exterior, gave Areti a quasi-classical profile, with a high-riding forward section and tall radar tower on the sundeck. The hull is cream-colored, balanced nicely by the white superstructure and gray accents. Areti’s owner chose this color scheme to match his previous yachts.

The yacht was built to the Passenger Yacht Code (PYC), which allows for more than 12 passengers. Areti has eight guest staterooms and a full-beam master suite on the main deck. The owner worked closely with Winch designers to create an interior with lavish woodwork and neutral fabrics, and entertainment areas with a “beach-chic vibe,” as Lürssen describes it. The spa, for instance, has a sauna, hot tub, full-depth plunge pool, relaxation area, and “experience” shower (with multi-temperature water jets, chromatherapy lights, and aromatherapy scents). The spa connects to the large swim platform at the transom for the full ocean experience.

The owner, chairman of a Russian natural gas conglomerate, had owned three other Aretis before this one. He kept Areti I and Areti II (identical 127-foot yachts built by Burger Boat Co.) in the Mediterranean and the United States so he would have one on each continent. Later, he took delivery of the 198-foot Areti from Trinity Yachts, the largest all-aluminum yacht the U.S. shipyard has built. This larger, bespoke Lürssen Areti promises to open a new yachting chapter for the owner and his family.