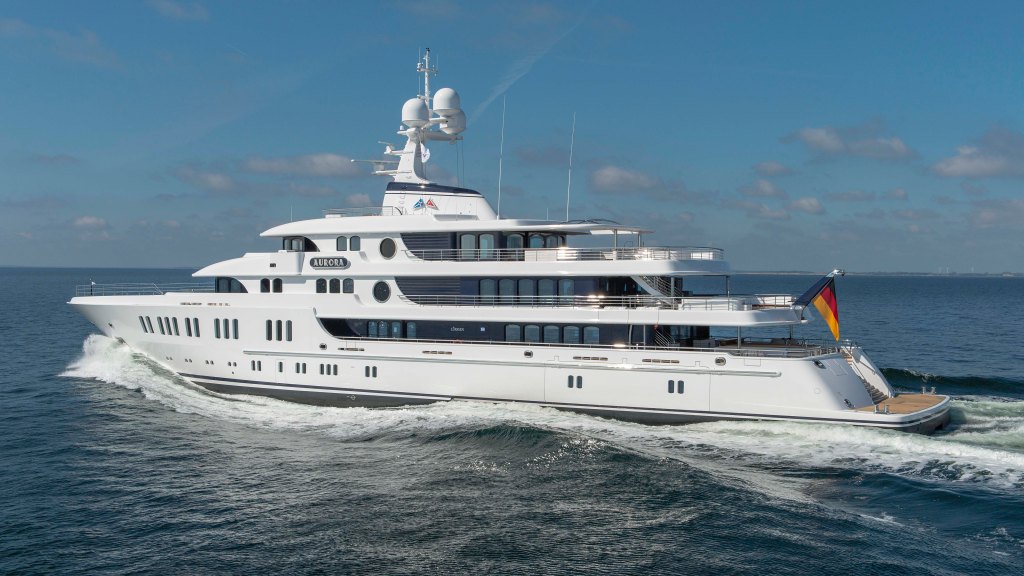 Lürssen’s Aurora, formerly Project Gatsby, was recently delivered to its owners by the German shipyard. The 243-foot superyacht’s interior by London-based Winch Design matches its code name, at least by period, employing an art-deco theme. The owner was closely involved in the yacht’s design process, choosing paintings, sculpture, and prints from artists of the art-deco period. The master suite was designed around antique artwork, while each guest stateroom employs a specific theme to distinguish it.

Despite the stylized interior, the primary directive from the owner was to make Aurora as family friendly as possible. Both inside and out, the designers created many personal, intimate areas with small get-togethers in mind. There are also open spaces, like the 42-foot-wide, full-beam skylounge, one of Aurora’s grander areas, for larger social events. It is also defined by art-deco-themed artwork, and connected to an exterior deck with bar.

The Winch team took cues from luxury ocean liners of the last century when creating the exterior. The designers used rich mahogany railings and stainless-steel accents, punctuated by circular portholes to light the main inner stairway, to lend to the classic look. Exterior lighting and rectangular windows on all three decks also give the profile a more traditional appearance than most superyachts, which are trending toward futuristic looks.

Peter Lürssen, the shipyard’s managing partner, said the owner’s family had enjoyed yachting for many years before deciding on a bespoke build. “We are looking forward to Aurora finding its place among its peers as a remarkable statement in large yacht construction, based on a strong design and expert engineering skills,” said Lürssen. Aurora concluded its sea trials last month in the Baltic and was delivered to the owners in the Mediterranean for a summer-long cruise.