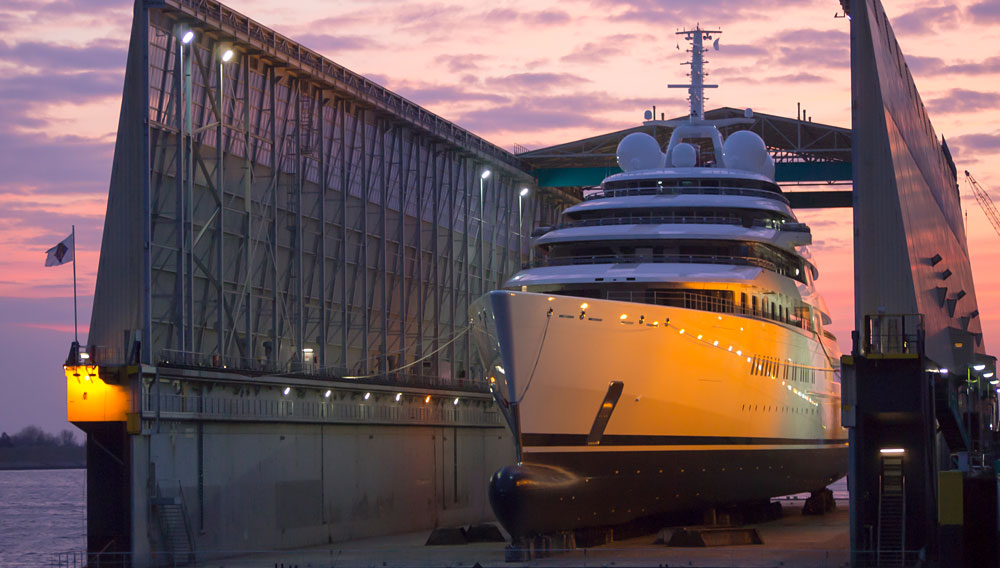 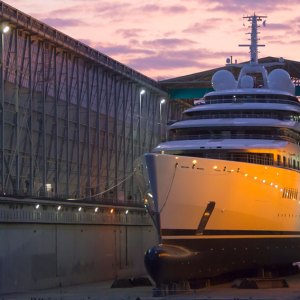 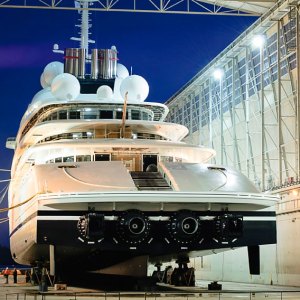 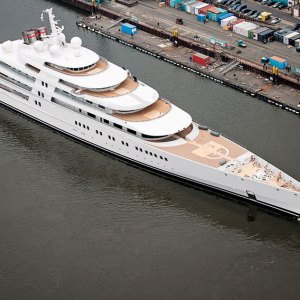 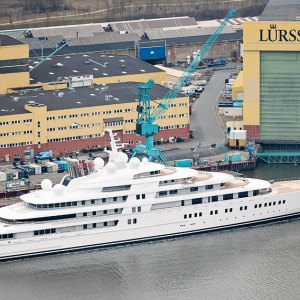 Lürssen has long been a global leader in megayacht construction, but in the last year, the German builder has delivered some of its largest and most stunning vessels to date. Following the delivery last year of the 278-foot Ace and 483-foot Topaz, Lürssen has continued full steam ahead in 2013. In January the shipyard delivered the 289-foot Quattroelle, and in April it launched Azzam, which, at 590 feet, is the world’s largest megayacht (surpassing the 2010 Blohm & Voss–built Eclipse by 55 feet). Owners of ships of this caliber typically do not disclose many details about their yachts, and rarely do they allow interior photographs. Here is what we do know about each of these enormous vessels.

When the 590-foot Azzam hit the water in April, it became the world’s largest megayacht. The steel-hulled vessel features exterior design from the Italian firm Nauta Yachts (www.nautayachts.com) and an interior from the French designer Christophe Leoni. Burgess (www.burgessyachts.com) served as the technical project manager for the yacht’s build. Azzam has seven decks and a beam of nearly 70 feet, allowing for an incredible amount of interior space. The yacht’s main salon, for example, measures about 5,600 square feet. One of the owner’s design mandates was that the yacht be able to access ports around the world and ply shallow tropical waters. To that end, in a remarkable feat of maritime engineering, Lürssen was able to equip the enormous vessel with a draft of just 14 feet. The yacht draws power from two gas-turbine engines and two diesel engines, for a total output of 94,000 hp. With a top speed of 30 knots, the world’s largest yacht is far from the slowest. Lürssen is currently putting the finishing touches on Azzam and expects to deliver it later this year.

At 278 feet, Ace is less than half the size of Azzam but no less beautiful. Ace features a striking exterior and an interior from the English designer Andrew Winch (www.andrew-winch-designs.co.uk), and the build process was overseen by the experts at Moran Yacht & Ship (www.moranyachts.com). The yacht has five decks and a gross weight of approximately 2,500 tons. The 220-foot fast support vessel Garçon, built by the Dutch shipyard Amels (www.amels-holland.com), serves Ace by carrying the yacht’s flotilla of toys and tenders, as well as a helicopter.

Designed by the celebrated naval architect Tim Heywood, Topaz is a whopping 483 feet long—making it the sixth-largest in the world—and has a gross weight of more than 11,000 tons. The yacht features two helipads, seven decks, and an interior from the English firm Terence Disdale Design (www.terencedisdale.co.uk).

Quattroelle accommodates 12 guests in six cabins, and offers room for 28 crewmembers. Amenities aboard the 282-foot yacht, which has a globe-trotting range of 6,000 nautical miles, include an eight-person spa, a large countercurrent swimming pool, and a stable of toys and tenders, as well as a gym, hair salon, massage parlor, and movie theater. Quattroelle charters through Moran Yacht & Ship (www.moranyachts.com) at rates starting at about $1.3 million per week. (www.lurssen.com)