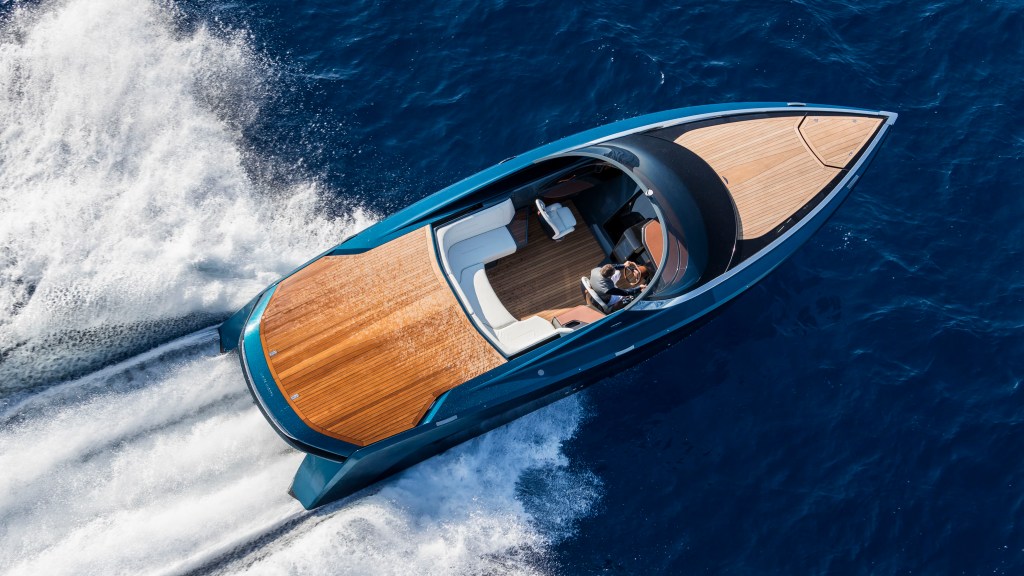 One-off boats named after iconic sports cars are nothing new. They usually involve a hobbyist creating a boat that resembles a famous car, and they often vanish as fast as they appeared. This year’s crossover yachts, however, are significantly different. Conceived by the automakers’ own design teams and built by well-established shipyards in the United States and Europe, these five examples break boundaries when it comes to exterior design, use of exotic materials, and innovations completely new to the yachting world. Whether the timing of so many launches is coincidental or this marks a new trend, the brave new world of crossover yachts seems here to stay.

Aston Martin’s in-house team worked side by side with Quintessence Yachts  on its 50-knot AM37 ($1.58 million), so there is no mistaking its sports-car heritage. The curves of the topsides, the single wraparound windshield, and the leather saddlebags in the cockpit convey Aston Martin’s DNA. Quintessence added such innovations as a carbon-fiber bimini that slides out electrically from the teak stern.

Named after the 1930s Silver Arrows race cars for its monochromatic color, the Silver Arrows Arrow 460-Granturismo ($2.67 million) is actually more like a new Mercedes S-Class. It offers a soft ride, roll-down side windows that turn clear or opaque, a hydraulic swim platform, and an interior by Mercedes-Benz Style that is as plush as a limousine’s.

Cigarette Racing has worked with Gorden Wagener, chief designer for Daimler AG, for a decade on its AMG boats. This year’s Cigarette Marauder AMG 50 ($1.8 million), fashioned after the Mercedes-AMG GT R, has twin 1,550 hp Mercury Racing engines and black-and-gray leather seats with green stitching. “We’ve worked well since the beginning, but this Marauder was the most perfect yet in design and engineering,” said a grinning Wagener after a 100-knot  sprint across Miami’s Biscayne Bay.

Lexus built its one-off Sport Yacht 42 to demonstrate its design abilities. The lightweight carbon-fiber hull and twin 470 hp Lexus engines (similar to the one in the new LC 500 coupe) give it a top speed of 43 knots. A cool “mini-me” duplicate helm console embedded in the steering wheel, a boost button that bypasses the rev limiter by 1,000 rpm, and the centerline helm show technical prowess on a futuristic-looking boat.

Bugatti partnered with Palmer Johnson, the veteran builder of sport-style superyachts, for the Niniette 66 ($4 million). Inspired by the new Bugatti Chiron, the Niniette has a stunning cockpit, with a sun pad, a Jacuzzi, a Champagne cooler, and even a fire pit. The interior’s horseshoe-shaped design delivers a cocooning effect, and soft leather, polished metal, suede, and carbon fiber give it a contemporary feel. The yacht’s top speed is 44 knots.