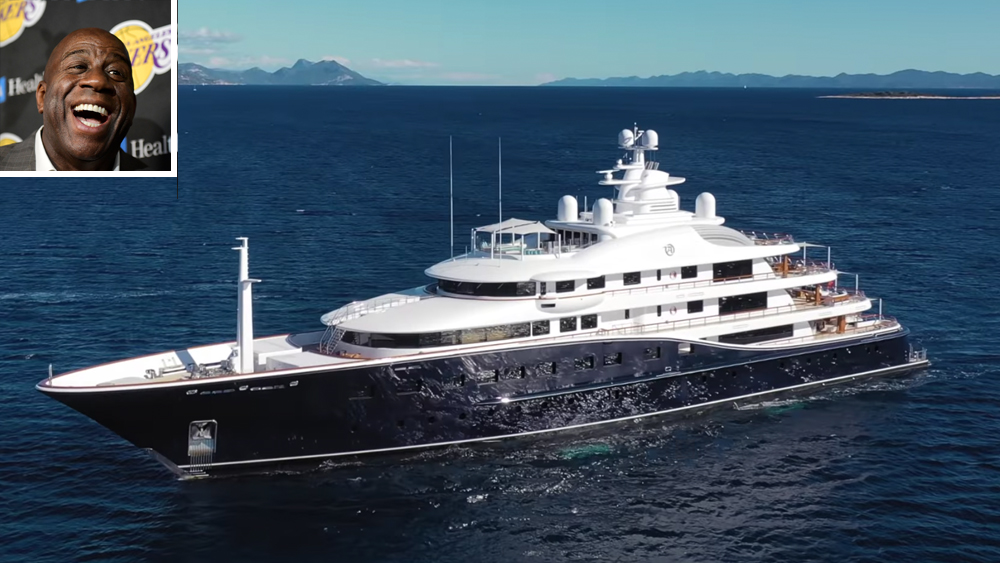 When you’re Magic Johnson, a simple European getaway just won’t do. You have to take in the continent by boat.

The NBA legend and entrepreneur is currently enjoying some time cruising around the Mediterranean onboard the Aquila, a 281-foot superyacht. And the Lakers great and his wife Cookie have invited along a star-studded group of pals, including Samuel L. Jackson and LL Cool J, to join in on the experience.

Magic, who TMZ says likes to spend a month across the Atlantic each summer, has gone all out for his latest vacation. The Aquila is the largest boat built in the US since the 1930s, according to its Burgess charter listing. Originally developed by Derektor in 2010, the vessel sailed under the name Cakewalk until it was sold and completely refitted in 2016. The renewed, four-deck yacht has even more space from which its passengers can gaze upon cities like Corfu, Capri and Cervo, and is perfect for entertaining a one very large man and his family and friends.

The yacht has a massive owner’s suite with a massage room, salon and private deck that overlooks the bow, along with six other spacious guest suites. There’s also a cinema room, gym, two more massage rooms. When it comes time for entertaining, there’s a saloon called the London Bar, a beach club at sea level and a dedicated party deck with its own DJ booth, AV system and smoke machine. The interior’s pièce de résistance, though, is a 36-foot “waterfall” chandelier that stretches from the sun deck to the lower deck.

Other amenities on the Aquila include a limousine tender, a deck jacuzzi, aquapark, trampoline and all the water toys you could ever want (think: jet skis, kayaks and wakeboards). The yacht, which has a 50-foot beam, is also manned by a crew of 28. It’s powered by two 3,306 hp MTU engine and has a top speed of 17 knots and a cruising speed of 15 knots.

As you may have guessed, a boat like this doesn’t come cheap. The superyacht is reportedly worth over $150 million. Johnson is only chartering the vessel, but even that will set him back nearly €1 million (or about $1.2 million) a week, according to the listing. One thing is clear: No. 32 loves spending time on the Aquila. In fact, this isn’t his first time he’s rented the vessel. He also took it out on vacation back in 2019, according to TMZ. And honestly, who can blame him?