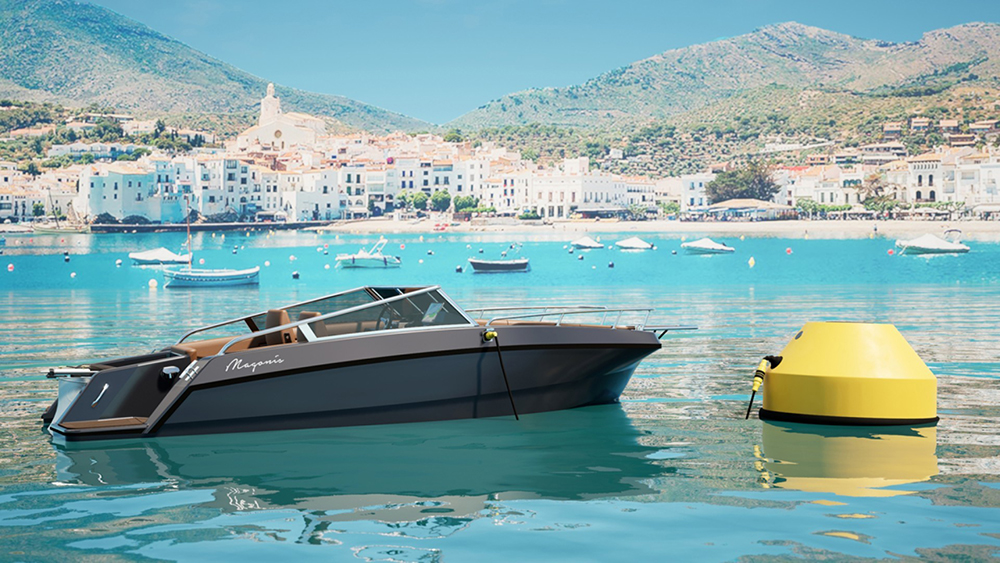 Magonis has found a clever new way to extend the range of electric yachts at sea.

The Spanish yard, which has established itself as a pioneer of green technologies over the past five years, has just unveiled what it claims is the first “charging buoy.” The new MagBuoy will officially debut at Boot Düsseldorf next January, but Magonis has decided to preview it and two other sustainable innovations ahead of the show.

Developed in-house by the research and development team in Figueres, the MagBuoy is compatible with electric boats and yachts by all yards. Equipped with a built-in battery, the buoy receives power via an underwater cable that is connected to the chosen city’s grid. To charge, seafarers can simply pull up to the buoy and plug its charging cable into their vessel.

According to Magonis, the nifty floating device is easy to install. As a result, it has the power to improve the charging infrastructure (or lack thereof) on the seas and bring it closer to that of the car industry. Moreover, it means you don’t have to visit a marina or dock to get juice.

“Making electric boats, and developing technology like the MAGBuoy that charges any electric boat, means that more people who want to switch from petrol to electric have the infrastructure and confidence to do so,” François Jozic, CEO of Magonis, said in a statement.

In addition to the buoy, two examples of the Magonis Wave e-550 will debut at Boot. The 18-footer is available with four different types of electric outboard motors, but the duo on display will be equipped with the 30kW MAG Power electric thruster that promises a top speed of 22 knots. The range-topper can run for 12 hours at a cruising speed of three knots or cover roughly 30 nautical miles on a single charge. You can also fast-charge from zero to 100 percent in less than two hours.

In addition to clean, emissions-free cruising, the dayboat offers a generous cockpit with seating for six, a versatile bow area that can transform from a cozy dinette to a comfy sunbed on demand and a ton of optional extras. That includes a new solar awning that will be presented at Boot. Designed for the Wave e-550, the foldable and flexible awning can generate up to 1 kWh of energy for the vessel.

“In addition to our efficient, smart, and pure electric boats, Magonis is on a mission to create global solutions for electrification, reaching into new technologies,” adds technical director Miquel Antonio.

Just imagine what Magonis can achieve in the next five years.