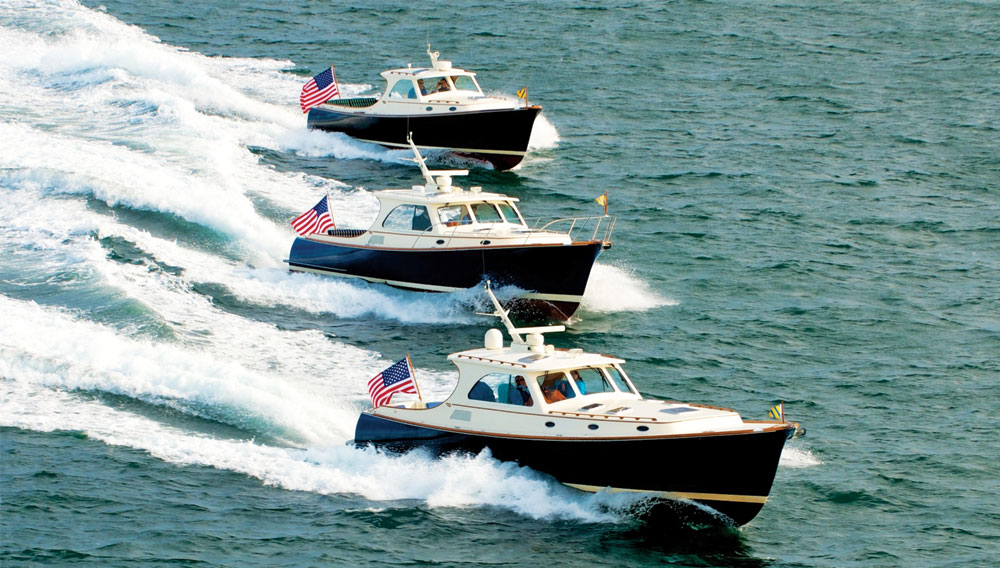 A Barton & Gray membership provides access to a fleet of Hinckley yachts for day trips.

On a raw and drizzly day in late September, Wil Lockman, the director of business development for the Barton & Gray Mariners Club, was at the helm of a 44-foot Hinckley Talaria, cruising around Boston Harbor. The club offers members day trips from various East Coast ports on its fleet of Hinckley motor yachts. Before the cold weather arrives in earnest, Barton & Gray moves the Talaria and the rest of its Hinckleys from its summertime ports in the Northeast to its winter locations in Florida. Just prior to shutting down the Boston port for the season, Lockman was showing off the Talaria, the company’s newest boat, and demonstrating the type of outings members can experience—though they usually include better weather.

Tim Barton and Doug Gray started the company in 2006 with one vessel, a 36-foot Hinckley Picnic Boat, and two ports, one at Nantucket Harbor and one at Palm Beach. (The ports are the departure points where club members can reserve a boat.) The company now operates out of 13 harbors along the East Coast: eight in the Northeast, including Newport, R.I., and Sag Harbor in the Hamptons, and five in Florida. Barton & Gray’s newest outpost is in Miami Beach, and this spring it will add a port in Manhattan. Key Largo, Fla.; Annapolis, Md.; and Harbor Springs, Mich., are among the possible locations for future ports. “The number one way we’re choosing new locations is where our members say they want to go boating,” said Lockman in September.

The company offers three membership levels. They range in price from $22,500 to $46,500 annually and require a $7,500 initiation fee. The higher the fee, the more days of boating a member can have reserved at any given time.

The Barton & Gray fleet has grown to 12 Hinckleys, including the initial 36-foot Picnic Boat, a 38-foot Convertible, and the 44-foot Talaria that Lockman had out on Boston Harbor. Like all of the motor yachts built by Hinckley, which was founded in 1928 in Southwest Harbor, Maine, the club’s boats have a Downeast design. The style features a high bow and a sweeping sheer to a low transom. It was adopted from fishing and lobster boats, and first became popular for recreational vessels around the middle of the 20th century. Because of their classic and elegant looks—which include teak decks and mahogany trim in the interior—and their superior build quality, Hinckleys have been called the Rolls-Royces of motor yachts. If what Tim Barton says is true, the boats share another quality with Rolls-Royces: a universal appeal. “There are a lot of great boats out there, beautiful boats, but Hinckley has a [unique] brand awareness,” says Barton. “Even people outside of the boating world have heard of Hinckley.”

This trait made Hinckley a good choice for Gray and Barton, because when they established their company, they assumed most of the members would come from outside of the boating world. Accordingly, membership does not require any yachting experience or skills, and every reservation includes the services of a captain. “You sit in the back with your gin and tonic,” says Barton, “and off you go.”

When Gray and Barton met and became friends in the late 1990s, Gray had a 25-foot fishing boat, and Barton owned a 30-foot sailboat. Each enjoyed nothing more than spending a day on the other’s boat. “We asked ourselves, ‘Why do we like doing this so much?’ ” Barton says. “And the lightbulb went off: Being just a passenger took all the hassles and headaches of maintenance out of the boating experience.”