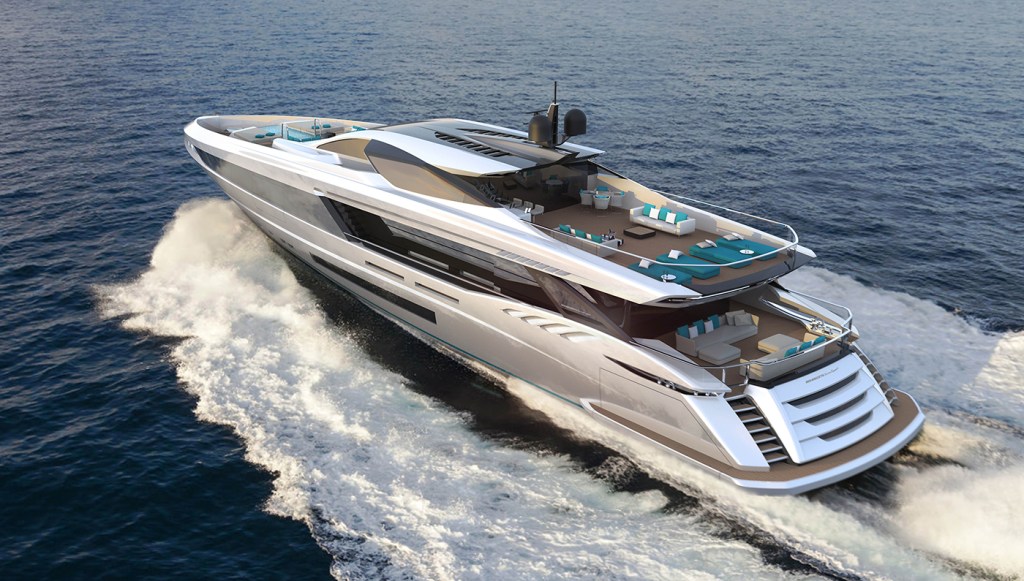 The Mangusta GranSport 44 yacht was one of the most noteworthy debuts at this year’s boat shows in Miami, with designer Alberto Mancini and Overmarine commercial director Francesco Frediani speaking at length about the second model in the new fast-displacement series. Mancini said he wanted to create a yacht for the “typical Mediterranean cruising lifestyle,” though its open exterior and 7-foot 2-inch draft would work also well in more tropical, remote waters like the Western Caribbean or islands of the South Pacific.

Mancini also designed the GranSport 54 that is scheduled to for delivery in 2019. While the 44 shares the “timeless, contemporary design” that epitomizes most Mangusta models, it is leaps and bounds ahead of just about any 150-footer in usable exterior space. The beach club, for instance, measures about 807 walkable square feet, a space more common on a yacht 30 feet longer. The rear garage opens to reveal a large interior space that also folds down on both sides, creating two terraces. The swim platform slides aft by 6 feet to increase the usable volume. Continuing the open design, the upper deck is more like a sport coupe with a fully exposed exterior that moves forward under a hardtop to integrate with an upper salon and helm. The bow area, typically used for either tender storage or as a small gathering place, replicates the large social spaces behind it. This area features a six-person lounge and Jacuzzi with endless waterfall in front, surrounded by sunbeds. The master suite also has opening terraces along the sides, and as a beautiful bonus, the Jacuzzi’s waterfall flows over the master head’s skylight. “We wanted the 44’s exterior to communicate with the interior wherever it could,” noted Mancini.

Like its GranSport 54 sibling, the 44’s other distinguishing factor is its fast-displacement hull. It is designed to deliver an impressive 26-knot top end with triple 2,600 hp MTU engines connected to a Kamewa waterjet. Besides adding several knots at top speed, the Kamewa also allows the boat to remain fixed in place, much like a GPS station-keeping feature. That’s a major asset for remote cruising grounds where setting an anchor in a coral reef or other protected area can be a bad idea. The fast-displacement hull also delivers a range of 3,000 miles at 20 knots.

With its 28-foot 2-inch beam, the new GranSport has a sizable interior with a full-beam master suite, two VIP staterooms, and two twins. There are crew quarters for seven. Its 7-foot 2-inch draft allows it to visit shallower cruising grounds like the Bahamas. The expected delivery date is 2019. (overmarine.com)