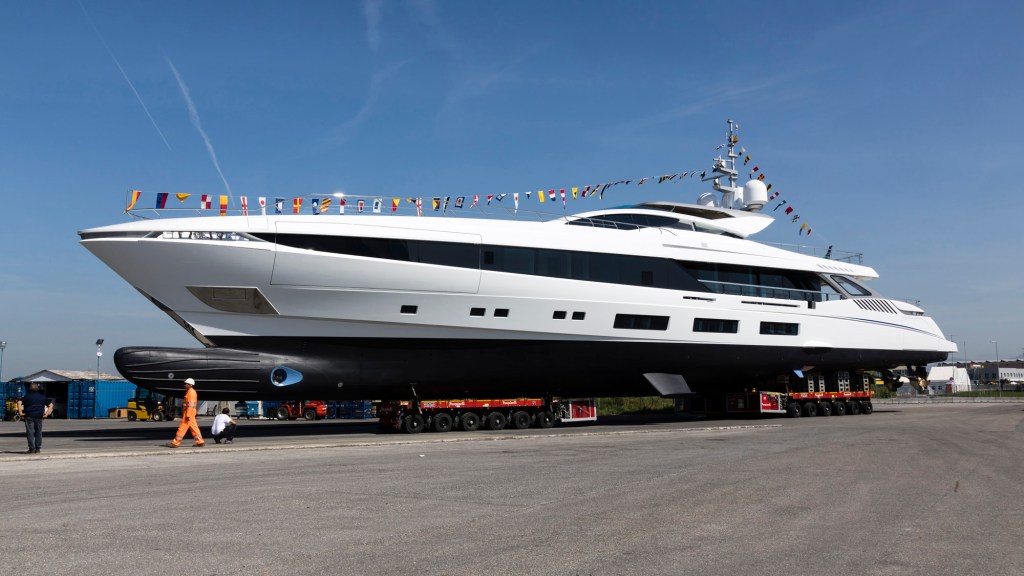 El Leon, Mangusta’s new flagship, was recently feted at a launch ceremony near Pisa with the owners, city authorities, parent company Overmarine’s owners, the Balducci family, and workers involved in the build. Designed by Alberto Mancini, the 178-foot superyacht is a milestone for the Italian builder, the first of its long-awaited, fast-displacement GranSport aluminum line.

“In the automotive sector the definition of GranSport is synonymous with high performance and optimal comfort,” said Maurizio Balducci, CEO of Overmarine, during the event. “These principles have been the key starting points for the creation of the new line. They are giving life to a model that is an authentic combination of performance and autonomy.”

Mancini gave the GranSport flagship yacht a long, sleek, and unusually straight profile, with long banks of tinted windows for natural light through the saloon, master suite, and guest staterooms. The design is very much in keeping with the Mangusta line, known for performance, but beneath the water’s surface is a bulbous bow and running surface that provide efficiency at displacement speeds and an impressive top speed of 30 knots, thanks to its four 16V MTU 2000 diesel engines. At optimal cruising speed, the yacht will have a transatlantic range of 3,500 miles. That combination of high speed and fuel efficiency gives El Leon’s owner the ability to cover long distances quickly or undertake long, leisurely cruises at slower speeds.

Mancini combined the muscular Mangusta look with Grand-Prix features like straight slits that serve as air intakes on the stern and a large roll bar integrated into the profile. The design also includes rotating doors that turn the stern into a “club on the sea” with terraces and a beach area. The flybridge also has a central bar designed to serve both the open aft deck and a hardtop-protected area for alfresco dining. El Leon will serve as a new beginning for Mangusta, a concrete demonstration that it has the technical chops to go beyond its performance roots into larger-length, fast-displacement superyachts.