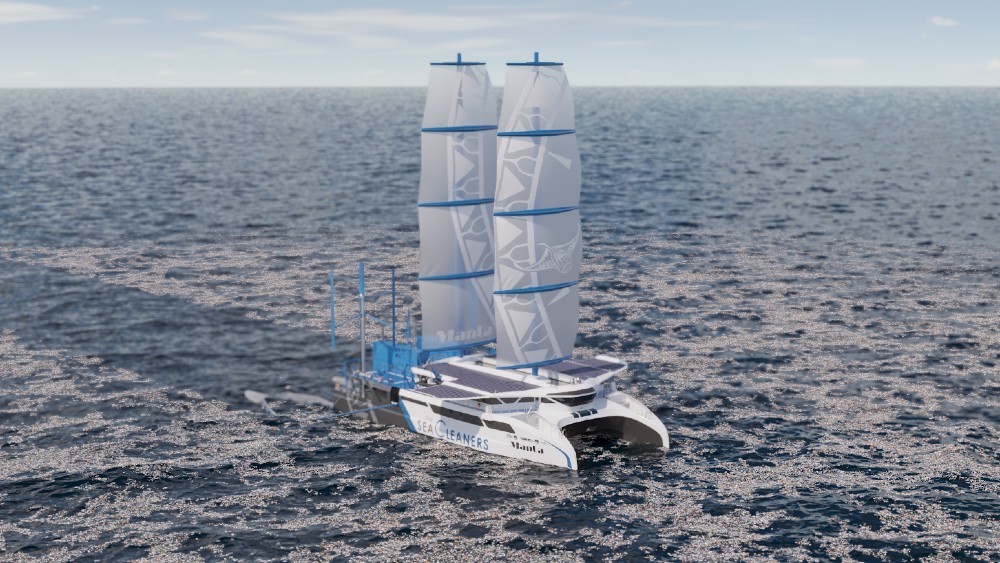 World-record sailor Yvan Bourgnon is the mastermind behind the venture. During 20 years of transatlantic competitions and various solo world tours (including the first person to sail solo from Alaska to Greenland), he witnessed a sharp increase in ocean pollution. In 2015, he was forced to abandon the Transat Jacques Vabre yacht race after his sailboat struck plastic debris in the Bay of Gascogne.

Bourgnon’s response was to set up The SeaCleaners NGO in 2016, a consortium of over 58 engineers, technicians and researchers comprising five research laboratories and 17 external partners to build a solution: The Manta.

Manta has nets along the stern to collect plastic and garbage, along with sustainable energy sources like solar panels and wind turbines to power the onboard collection and recycling center.  Courtesy SeaCleaners

“During my racing career, I’ve missed out on records and broken my boat 12 times from hitting ocean debris,” Bourgnon told Robb Report. “I’ve circumnavigated the world twice in my life, once at the age of 12 with my parents, and another 30 years later. The difference in the amount of plastic pollution was alarming. I knew something had to be done.”

Built from low-carbon steel, the Manta is a virtuous energy recovery unit wrapped up in a 185-foot sailboat design. It features a custom electric hybrid propulsion system enabling it to travel at controlled speeds of between two and three knots, the optimum speed for waste collection. Around 500kW of onboard renewable energy is generated via two wind turbines located at the stern, 500 square meters of photovoltaic solar panels at the bow, two hydro-generators under the boat and a Waste-to-Electricity Conversion Unit (WECU) used to power the hotel load, or what the captain and crew consume.

The Manta gets its name from a pair of retractable wings used to hold a third of the solar panels that mimic the shape of a manta ray. Despite being an oceangoing vessel, the Manta will primarily focus on coastal areas in and around the estuaries or mouths of the 10 most polluting rivers in the world. These include the Yangtze (the longest river in Asia), the Yellow River, which feeds into China’s Bohai Sea, and the Ganges, which runs through India and Bangladesh.

“Despite the boat’s capabilities, we’re not looking to operate in the middle of the oceans,” says Bourgnon. “Instead, we’ll be crossing the mouths of the rivers several times a day collecting the rubbish that continually spills into the sea. The 20 largest rivers in southeast Asia account for 60 percent of ocean plastic, so that’s where we’re concentrating our efforts.”

Three floatable collection systems give the Manta a plastic-eating span of 151 feet and a collection depth of three feet. Two cranes are used to extract large debris. Up to three tons of waste will be collected per hour and sorted on board by a crew of 22 working in two 12-hour shifts. Metal and glass are sent to shoreside recycling units, organic matter is returned to the sea, and plastic waste is fed into the WECU which vaporizes the plastic turning “syngas” into electricity. Operating for 300 days a year, the aim is to collect up to 10,000 tons per year. Two multi-purpose decontamination boats stored onboard—Mobula 8 and Mobula 10—will be deployed to access narrow and shallow areas. Both models will also be sold individually to encourage public and private initiatives.

The sailing cat plans to collect 10,000 tons of ocean trash each year. It will also be able to house marine biologists doing ocean research.  Courtesy SeaCleaners

“We’ll be collecting dense areas of macro-plastic pollution before it sinks or disintegrates into micro-plastics,” says the Franco-Swiss navigator. “Hurricanes and tsunamis cause massive inflows of pollution into the ocean, and it’s imperative that this pollution is dealt with quickly before it drifts, sinks and becomes irrecoverable.”

A shipyard is yet to be confirmed, but Bourgnon anticipates a two year-build for the first model, with delivery scheduled for the end of 2024. Sea trials will take place in Europe before heading to southeast Asia in 2025 to begin the first clean-up. Up to 10 scientists are also accommodated on board. All the scientific research and data collected by the Manta will be made available on an open-source platform.

“I’m not in competition with other boat builders to be the only one with a Manta,” says Bourgnon. “Our hope is that hundreds of Mantas will be built around the world to help with the great ocean cleanup.”