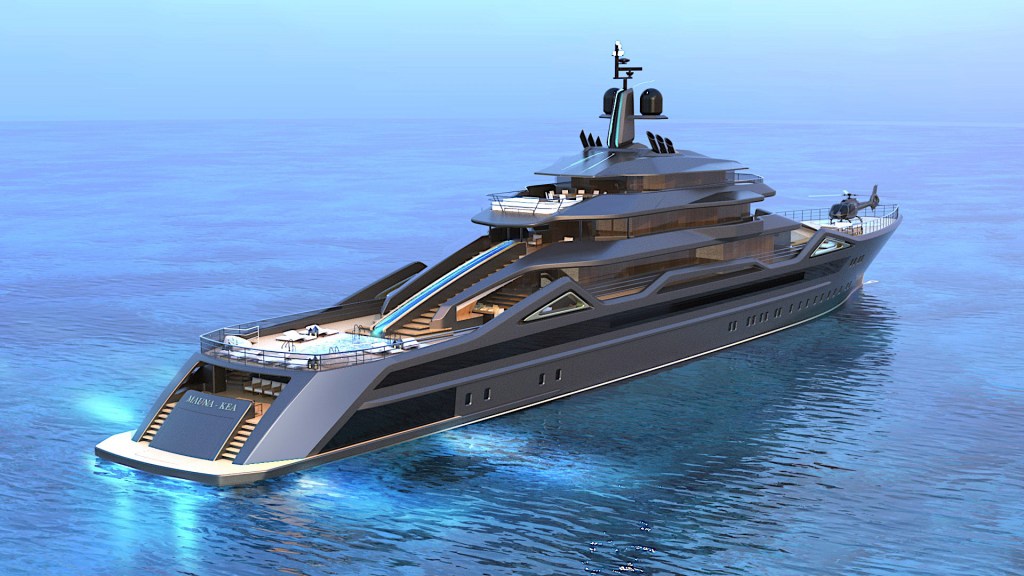 Mauna Kea, the new 331-foot concept by Roberto Curtó of RC Designs, is named after the volcano in Hawaii. The Italian designer took inspiration from the nearly 14,000-foot-tall peak, creating a stern that resembles a lava flow cascading down the side of the volcanic mountain. Instead of a red-hot stream, Curtó turned the center into a multi-deck water slide, surrounded by sets of stairs on both sides, that courses into a large swimming pool.

Mauna Kea, represented by SuperYachtsMonaco, has the same simple elegance as other recently launched gigayachts, with vast amounts of open space on the fore and aft decks. The tiered superstructure carries a modern architectural look, rather than the stacked wedding-cake design of many superyachts. Italian yard Fincantieri has expressed interest in being builder of choice. That would make sense given the fact that the yard has launched two landmark gigayachts, the 439-foot Serene in 2011 and 459-foot Ocean Victory in 2014, as well as presenting fresh and somewhat radical concepts each year.

Curtó has made a reputation for designing smaller, award-winning yachts. His eye for beautiful but practical designs is evident in brands like Galeon and Portofino. He brings that same sensibility to his superyacht projects. Mauna Kea, for instance, has a helipad on the foredeck, with stairs that climb up into the superstructure and join the aft staircase. That kind of balanced design, paired with features like the 46-foot-wide master apartment, should make Mauna Kea a noteworthy launch, once an owner is found.

Curtó has paired up with naval architect Mario Grassi of Navirex to design Mauna Kea’s steel hull for transoceanic travel. The yacht has an estimated top end of 16.5 knots. At 12 knots, it is expected to have a 6,000-mile range. A 16-foot draft will allow the yacht into the world’s most beautiful harbors. Mauna Kea’s accommodations for 12 promise to be as large and well designed as the vessel’s exterior. The crew roster extends to 22.