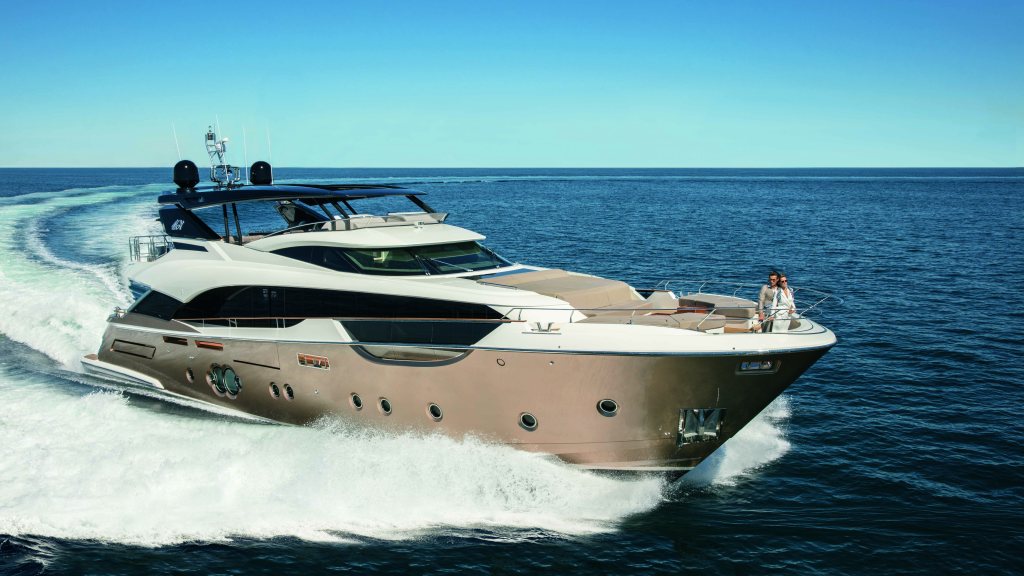 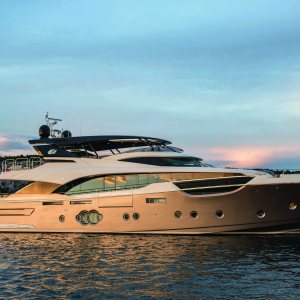 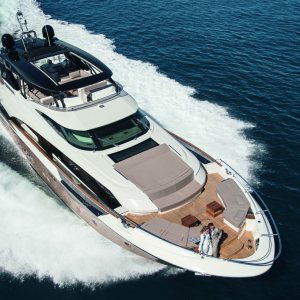 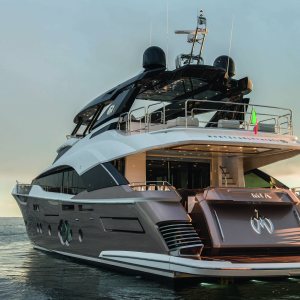 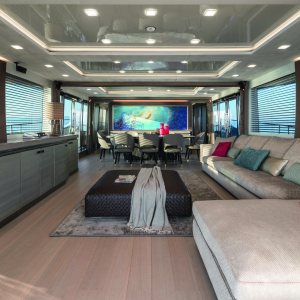 The new golden-hulled MCY 96 from Monte Carlo Yachts was designed for ocean cruising, rather than just looking good at the dock. The Nuvolari-Lenard design had its own private July launch in Venice for Monte Carlo Yachts owners, but its public release last week at the Cannes Yachting Festival showed it beside its larger sibling, the MCY 105, and many competitors’ yachts at the first show of the season. The 96 exudes a muscular sensuality, reminiscent of the larger 105, but with more of an edge. The Venice-based designers actually added a serrated edge to the profile by including high, protected bulwarks for offshore running. These bulwarks dip down at the front of the yacht to give the owners in the master suite a full view of the water. But as the profile moves aft, an overhang on the side deck dips down, providing protection from the elements while the yacht is running.

Monte Carlo Yachts uses a modular, jigsaw approach to building its yachts, so the interior volume is maximized, while weight stays minimal without compromising structural integrity. The practical results of that technique are particularly apparent on the main deck, which seems larger than other yachts in its class. The open saloon does actually feel wide open, thanks to floor-to-ceiling side windows that slide open and a wide entrance at the rear connected to the cockpit. Lounges are positioned at the back of the saloon, while a dining table for eight is forward near the opening side panels. The cockpit also has a large alfresco dining table that can seat 10 guests.

The master suite also enjoys a supersized effect. The bedroom has a sofa beside one window and a desk beside the other. Both are positioned next to floor-to-ceiling windows (thanks to the lowered exterior bulwarks) and under a transverse skylight. The suite also has a walk-in closet and nearly full-beam head that is impressive with its size and detailed marble work. The lower deck on the first MCY 96 has four guest staterooms, including two doubles at the rear and two twins amidships. Separate crew quarters for four are at the front of the yacht. The designers came up with six versions of the lower-deck layout, including several that minimize the number of staterooms to maximize space.

Despite the intrepid profile, Nuvolari-Lenard made sure the flybridge was an open playground, incorporating a carbon-fiber hardtop with large opening panel, Jacuzzi, facing lounges, and yet another outside dining table. On the foredeck is a large sunbed and table. Depending on engine choice, the Monte Carlo 96 reaches a top end of 27 knots. The MCY 96 will be at the Genoa show this week before moving to the Monaco Yacht Show next week.