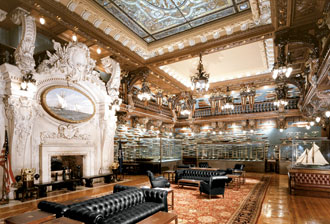 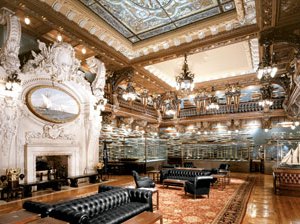 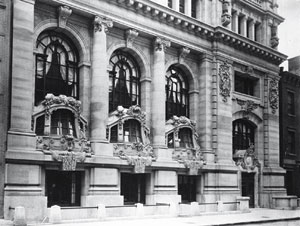 Today’s New York Yacht Club is, Commodore Lawrence Huntington says, “a far cry from white-haired businessmen having lunch in February in Manhattan.” It is no longer, as it was for most of its existence, a paradox: a yacht club with no permanent waterfront presence, only a midtown address, on West 44th Street between 5th and 6th avenues. With a clubhouse in Newport, R.I., that has become a popular summer destination, the club now attracts more young sailors into its fold than ever before.

Even before the 1988 addition of the Newport clubhouse, the 160-year-old club could argue it was the world’s preeminent yachting association. “As the yacht club was the earliest and only organization to have a national scope, thinkers and influential people in the sport tended to convene under the banner of the New York Yacht Club,” says Huntington. “It became established as the place where that influence would be wielded, and I think that persists to this day.”

John Cox Stevens, the club’s founder and first commodore, owned the schooner America, which, in 1851, bested a fleet of English competitors, caught the attention of Queen Victoria, and inspired the launch of the America’s Cup race. From 1851 through 1983, the club successfully defended the trophy 25 times.

However, after losing the America’s Cup to Australia in 1983, the officers of the NYYC realized that their organization’s identity had depended too heavily on its stewardship of the trophy. Younger sailors, especially those not living in New York, were joining clubs with waterfront properties, while the NYYC was fast becoming a creaky watering hole where Manhattan bankers would talk business rather than sailing over their cocktails.

The rejuvenation process began when the club acquired Harbour Court in Newport, once the summer home of John Nicholas Brown, of the Brown University Browns. By providing members with access to the steady winds and deep waters of Rhode Island Sound, Harbour Court quickly transformed the club’s character. “The club used to be a place where people met in the wintertime and convened for parties and dinners, and by definition, that meant an older crowd,” Huntington says.

Like its Harvard Club neighbor, the 44th Street clubhouse, which was designed by Grand Central Station architect Whitney Warren, still serves as a traditional, jacket-and-tie midtown club. It includes a full bar, leather couches, rooms for overnight guests, and a musty library full of noteworthy nautical volumes. The Model Room, the centerpiece of the West 44th Street clubhouse, contains close to 1,300 miniature ships mounted on the walls or enclosed in glass cases. Downstairs, the dining room, which is shaped like the interior of a hull, is popular for weekday lunches and pretheater dinners. Here, conversation, regardless of its initial direction, usually turns to boating.

At Harbour Court, about 200 miles northeast of midtown, the atmosphere is decidedly different. Deck shoes and polo shirts are part of the weekend dress code, and children are welcome to play outside on the sun-washed and wind-lashed grounds. As is the case at the 44th Street clubhouse, business conversations are discouraged in Harbour Court’s common areas, and cell phones are prohibited.

For decades, because it lacked an on-water facility, the New York Yacht Club was usually a member’s second club; Huntington himself, who lives in New York, belongs to the Indian Harbor Yacht Club in Greenwich, Conn. Now the NYYC has become the primary club for new members, who are continuing the annual tradition of sailing in the Newport-to-Bermuda regatta (2004 marked the event’s 150th anniversary) and the New York–to-Newport cruise. In May 2005, the club will host the Rolex Transatlantic Challenge, a race from New York Harbor to the English Channel that is open to single-hull sailboats 70 feet and longer.

Harbour Court also hosts the national championships of Optimist Prams, which are small boats used as training vessels for children as young as 3 years old. “You can’t imagine a bigger change for the New York Yacht Club than to have hundreds of 7- and 8-year-old Optimist sailors having a competition on its home dock,” says Huntington. “It’s terrific.”

Despite the changes to the club over the years, one element has remained constant: the power of the burgee, the flag with the blue background, red cross, and white star that only members can fly aboard their boats. The NYYC brand is so guarded that members are discouraged from even giving a hat sporting the burgee to a nonmember. The story goes that when a boat flying the club’s burgee approaches a marina anywhere in the world, the dockmaster will quickly find room for the vessel. “Members are proud to fly the burgee,” Huntington says with modesty. “How do others perceive them? I’ll leave that to them.”

To become a member, a candidate must be nominated by an existing member. While ownership of a vessel is not required, a candidate must be familiar with boats and should have accomplished a significant achievement in boating. “You could be Tiger Woods and not be able to get in the New York Yacht Club if you hadn’t demonstrated anything other than being a gentleman and a super golfer,” says Commodore Lawrence Huntington. “There has to be an interest and an involvement in the sport; then the process is like any other association.”

Once an applicant has been nominated by a member, he or she meets with the membership committee. Upon approval of the application, a new member can attend a reception ceremony at either Harbour Court (in the spring) or 44th Street (in the fall). New members are traditionally given carnations to wear and are welcome to bring their families to the ceremony. The club does not disclose annual membership dues.