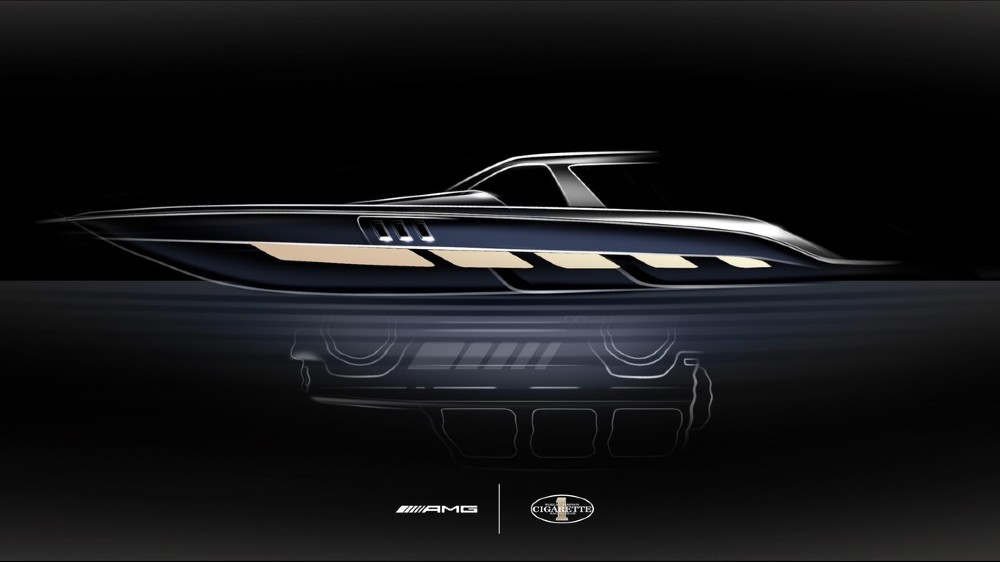 Mercedes-AMG’s latest vehicle is set to be unveiled later this week. But it’s not a new souped-up car; rather, it’s a brand new racing boat.

Later this week, Mercedes-Benz’s high-performance division is expected to debut its latest nautical collaboration with Cigarette Racing at the Miami Boat Show. If that wasn’t reason enough for excitement, their latest team-up appears to have drawn inspiration from one of the automaker’s most beloved models—the G-Wagen.

While the duo isn’t ready to reveal its cards just yet, on Monday Cigarette released a teaser rendering on social media of what’s to come. The rendering offers little more than a shadowy image against a black backdrop, just enough to offer a tantalizing hint of what to expect at Thursday’s big reveal.

Of course, like any good tease, there’s just enough in the image to get people leaping to conclusions. For instance, the rendering seems to support the notion that the boat will feature a center console setup. More importantly, at least for boat enthusiasts, the rendering seems to suggest that boat will take its design cues from the G-Wagen. A close look at the boat’s reflection in the water reveals the distinct silhouette of the marque’s iconic boxy SUV.

There are other inferences that can be drawn from the companies’ past collaborations as well. Car and Driver reports that the boat will most likely be powered by a pair (or more) of Mercury Racing outboard motors, though it could also be outfitted with a setup similar to the 1,100 hp sterndrive that was featured on the 2017 AMG SD GT3 boat. The three windows alongside the hull, just below the console, also suggest that the boat will be a similar length to Cigarette’s 59-foot Tirranna.

While we will all have to wait until Thursday (the first day of the Miami Boat Show) to see the final product, we would expect it to be nothing if not impressive, especially for fans of previous Cigarette Racing collaborations. After all, last year’s 41 AMG Carbon Edition and its 83 mph top speed weren’t too shabby.