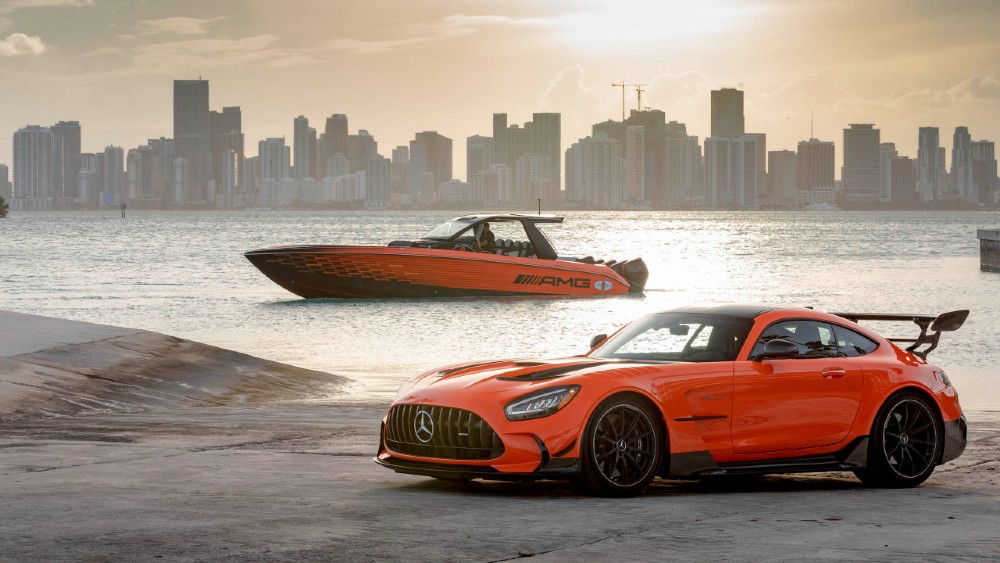 Call it the Power of 13. The 13th special edition to emerge from the high-profile, car-boat collaboration between Mercedes-AMG and Florida-based Cigarette Racing, is all about one thing: More power.

With Mercedes recently debuting its most-powerful V8-engined AMG supercar to date, the 720-horsepower Mercedes-AMG GT Black Series, it was only right that the latest AMG Cigarette should likewise up the power ante, to a staggering 2,250 horses.

Here then is the one-off, $1.2 million Cigarette 41 Nighthawk AMG Black Series, a 41-foot, needle-nosed projectile inspired by the AMG supercar that made its global debut in the Florida Keys this week.

The custom 41 Nighthawk blasts across its hometown waterfront in Miami.  Courtesy Mike Shaffer/Mercedes-Benz

While Miami-based Cigarette Racing has been building the 41 Nighthawk for more than six years, this AMG version has the distinction of being the first to be fitted with five racing-grade Mercury 450R outboards.

With an extra 450 horsepower on tap, the Nighthawk hits a higher top speed, delivers swifter and more aggressive “out of the hole” acceleration, and yes, has bigger bragging rights among the go-fast boat community.

“Being the first Nighthawk to have five outboards does make this boat very special,” Erik Christiansen, president of Cigarette Racing, tells Robb Report. “It takes it to another level of performance.”

The Mercury Racing 450R outboards are the first quints on the 41. Cigarette has seen speeds of 91 mph.  Courtesy Mike Shaffer/Mercedes=Benz

How fast? Christiansen says has seen 91 mph on the digital speedo, with the potential to get close to the magic 100 mph.

In addition to adding more power, Cigarette shaved almost 600 pounds from the boat’s waistline by molding the entire deck section in carbon fiber. That new deck also increases the boat’s strength and rigidity, and lowers its center of gravity. That in turn means sharper handling and better balance in turns.

Christiansen blasted the new AMG Nighthawk down from Cigarette Racing’s home base in Opa-locka, Miami, to the exclusive Ocean Reef Club in Key Largo, for its global reveal this week. It was a chance for us to get a taste of its literally eye-watering performance.

The Magnabeam orange exterior, which will be limited to this single boat, is just one enhancement of many on the bespoke NIghthawk.  Courtesy Mike Shaffer/Mercedes-Benz

The boat is certainly hard to miss as it idles into the Ocean Reef Club channel. Painted the same shade of retina-searing Magmabeam Orange that debuted on the AMG GT Black Series two-seater, it’s a guaranteed head-spinner.

Step aboard and there’s seating for 10 during top-speed running. The best seats in the house are the two rows under the sleek carbon-fiber hardtop. Each of the three front seats are electrically height-adjustable to ensure riders get a good view through that curvy, frameless, windshield.

Christiansen is doing the helming today. At the touch of a button, all five 4.6-liter V8 Mercury Racing 450R outboards, with their bold AMG Magmabeam Orange cowling stripes, burst into life. This is one of the first boats to get Mercury’s newest “shadow throttling” system that lets all five engines be controlled by just two levers.

Now we’re idling out into a calm Atlantic just off Key Largo. With a quick check to make sure everyone is hanging on, Christiansen punches those twin levers hard forward and we feel the instant surge as all 2,250 horses are unleashed.

Within seconds, we’re running at 80 mph, the speed given on one of the three Garmin 8617 displays, showing the impressive velocity.

At this speed, the Nighthawk’s twin-step hull design is slicing through the waves like a hot knife through butter. Even the occasional steep swell doesn’t phase the hull. And the muffled roar of those big V8s sounds distant and muted.

Eighty-five miles per hour may not sound like much compared to a car, but on the water it’s like hitting the hyper-drive.  Courtesy Mike Shaffer/Mercedes-Benz

With flat water ahead, Christiansen pushes the throttles to the stops and the speed soars easily past 85 mph.

Now 85 mph on a boat is a lot different than 85 mph in a $325,000 Mercedes-AMG GT Black Series. Sitting anywhere away from the protection of the huge glass windshield will bring tears to your eyes, distort your face, and send sunglasses hurtling into the deep.

But what’s remarkable about the boat is its refinement. Even with those five Mercury 450Rs at full pelt, all you hear from the helm is that rush of wind.

The three seats at the helm are height adjustable, one of many smart features on the new Cigarette.  Courtesy Mike Shaffer/Mercedes-Benz

If all this has you reaching for your AMEX Centurion card, you’re out of luck. Seems the boat already has a buyer—a Cigarette fan who saw it on a shakedown test in Miami and called up the company to buy it.

“Of course, we’ll happily build anyone a regular Nighthawk. Just not in this shade of orange,” says Christiansen. “It’s what makes the AMG Black Series unique.”