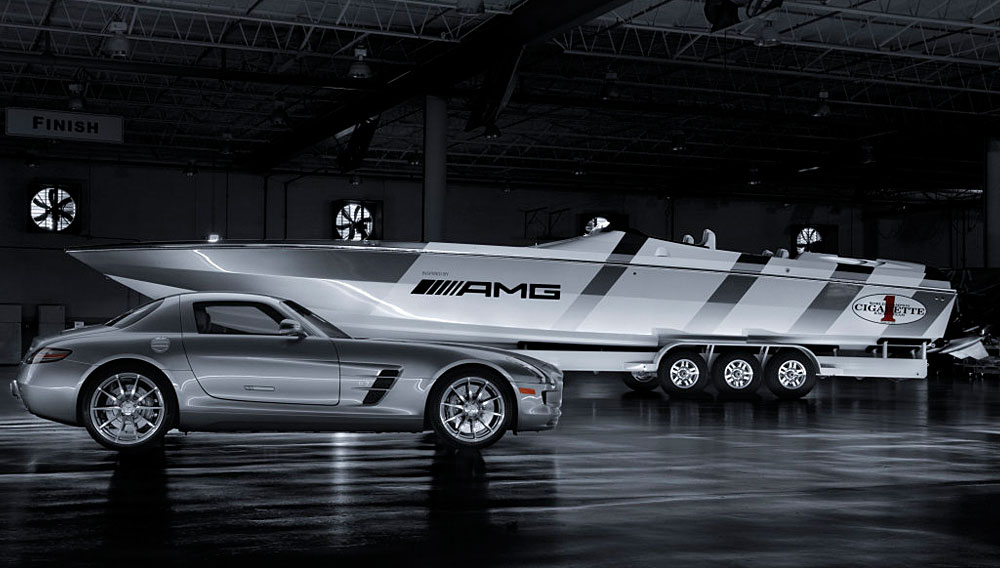 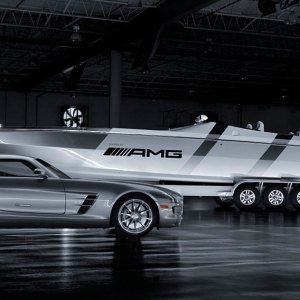 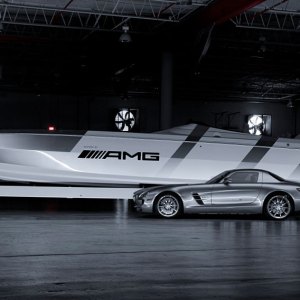 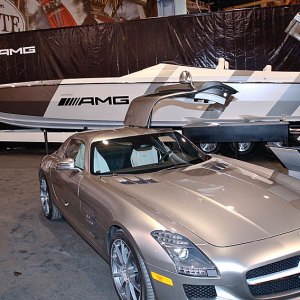 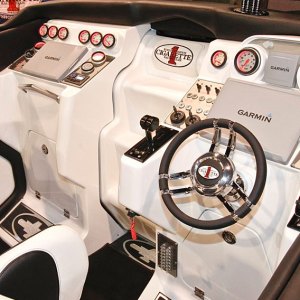 In what seems to aficionados of speed like an act of divine providence, one of the world’s swiftest super cars—the 2011 Mercedes-Benz SLS AMG—has inspired one of the world’s swiftest boats. At this year’s Miami Boat Show, Florida-based boat builder Cigarette Racing unveiled the dramatic “Inspired by AMG” Rider, a 46-foot speedboat engineered with assistance from Mercedes’ in-house performance tuner. Like Mercedes-AMG’s legendarily quick cars, Cigarette’s boats, made famous by appearances in the 1980s TV series Miami Vice, feature dramatic proportions—a very generous overall length and a relatively narrow beam—with prodigious power and top speeds in excess of 100 mph.

Beneath some very bold AMG graphics, the “Inspired by AMG” Rider wears Mercedes’ Alubeam silver paint, à la the SLS AMG, embedded with minute metallic flakes that provide unsurpassed depth and reflectivity. The cockpit is wrapped in a marine-grade version of the SLS’ white-leather upholstery. Rest assured, however, this boat is about more than looks. Providing the motivation is a pair of twin-turbocharged 9-liter Mercury Racing V-8 engines producing 1,350 horsepower—each. Top speed is a scintillating 130 mph. The SLS AMG, in contrast, makes do with just one engine: a handcrafted 6.2-liter V-8 producing 563 horsepower. But it’s sufficient to launch the car to 60 mph in only 3.7 seconds and will keep up the charge all the way to 197 mph.

Cigarette Racing considers the “Inspired by AMG” Rider to be a floating showcase of future technology (with more than 100 innovations gleaned from the team at Mercedes-AMG). Sales are set to commence only after the prototype’s worldwide tour ends. Pricing hasn’t been announced, but the all-new 46-foot boat upon which the “Inspired by AMG” model is based starts at a lofty $900,000. The SLS AMG coupe arrived in U.S. showrooms in May, priced at $183,000. (mbusa.com, cigaretteracing.com)